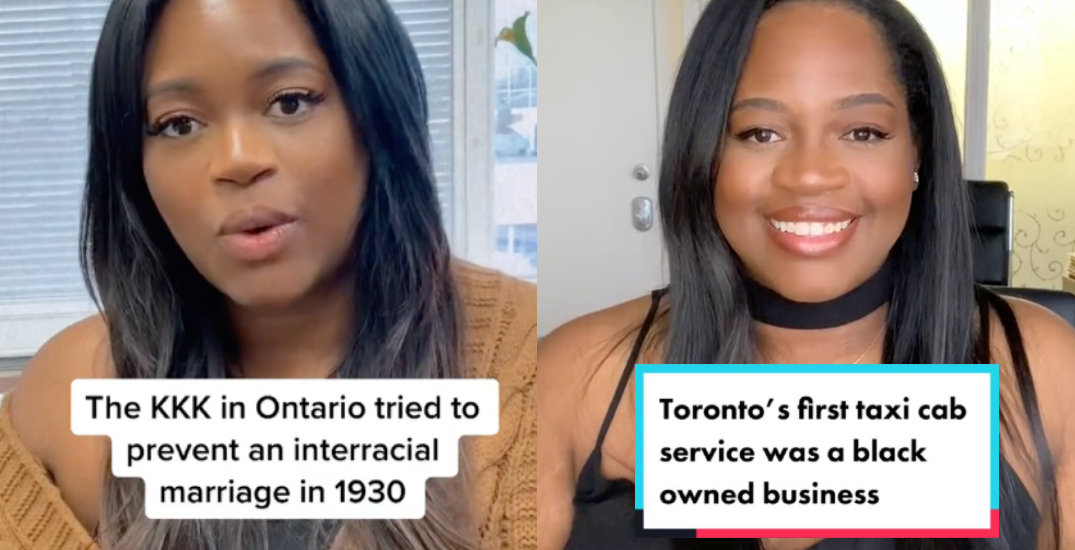 While Black history in general get the attention it deserves in the media, Canadian Black history is buried even deeper. But a Toronto-based lawyer is trying to change that.

Meet Fayola Benjamin aka @fayolajamee on TikTok, whose 30-second educational videos about the good and bad of Black history, especially Canadian Black history, are taking the app by storm.

Benjamin practices personal injury at her family’s Black-owned business, where she’s been working for three years. She was born in New York, lived in Trinidad, and then moved to Canada.

The comments on Benjamin’s informative videos show a range of emotions, but the most common is surprise.

Most people have never heard about the under-discussed topics she highlights, whether they’re about darker historical reminders about oppression and racism, or happier themes, like stories of Black Canadian achievements, inventions, and movements.

Daily Hive spoke to Benjamin about her TikTok journey, her career as a lawyer, what curating Canadian Black history means to her, and what makes an ally a good ally.

Here’s what she told us.

What made you want to talk about Black history on TikTok?

I wanted to talk about Black history on TikTok because I wanted to educate Canadians on a very hidden essential part of history — because the reality is Black History is Canadian history. Black contributions, achievements, and experiences did develop Canada. And so I feel like it’s very important for people to know this.

How do you feel about Canada’s approach to Black history?

There’s also very limited information about Black history in Canada. I remember going to school and learning every year about Martin Luther King Rosa Parks, Harriet Tubman, and the Underground Railroad, and always thinking like, there has to be more to black history than this. And also, this is not even Canadian history. What’s going on?

And so, for many, many years, I would research, I would learn, and really notice that unless you go looking, you’re not going to find information based on the nature of the system. I thought that not only is it important to me, but it’s very relevant information for other people to have, to share. For the most part, I waited for the government or someone else to fill that space of educating Canadians on Canadian black history, but then I realized that I shouldn’t be waiting. Why wait?

Has Canadian Black history been ignored by the media?

Canadian Black history is ignored in the media, and this is nothing new. In Canada, systemic racism is very loud, and it’s literally reflected in media. So the underrepresentation of Black people and Black stories about culture and experiences in media is not surprising.

This is why I think it’s important for people — not just Black people — to have conversations, to do research, to be interested in Black culture and stories, and share it because it’s relevant and it’s important.

The only way things will change in media is if conversations are happening outside of it.

What inspired the 30-seconds of Black History series?

It was inspired by my desire to diversify the information that was discussed and shared and talked about during Black History Month. That’s where it started initially.

I also wanted to create content that was easily digestible, because I know that the reality is, with Black history, a lot of the aspects are uncomfortable. People typically shy away from talking about race, racism, and Black experiences, because it’s overwhelming.

And sometimes, people feel guilty — that’s just the truth. But I wanted to create content and give information and educate in a way that wasn’t too heavy. I thought that sharing on TikTok, which is an easy-to-use platform and connects a lot of people, would be a perfect idea, and sharing it in 30 seconds would be even better.

How does your training as a lawyer help you in your TikTok endeavour?

As a lawyer, advocacy is the most important skill that I think I have, and this is what I do every day. I research, share facts, analyze those facts, and discuss them, so that’s just what I do on TikTok — this is nothing new to me.

I think even TikTok helps me with my job as a lawyer because I get to really talk. I get to hear my voice, I get to make sense of information and have an audience — and that is actually what I do at work. It’s been really great being able to do work and TikTok, and have those two intersect and help each other because it only makes me a more complete person.

What defines a good ally to the Black community, for you?

A good ally is someone who confronts their own internalized racism. They are open to listening and understanding the Black experience, free of their own opinions. They also amplify black voices using their privilege, if it’s possible.

I think it’s important that, as an ally, you recognize that all the information that you’re learning, all the experiences that you’ll hear will make you feel uncomfortable — possibly even guilty — but don’t let those feelings get in the way of education.

And a good ally is open.