I’m a pretty laid back person. I believe everybody has the right to their own beliefs and opinions but when your opinion is as stupid as the one i am about to share with you, i kinda find it hard to hold back.

Those of you who read the Metro news on your morning commute to work will have read a disturbing article in Wednesdays paper, page 6, titled ‘Whack a seal, it’s our right’ written by a Mr Paul Sullivan.

I don’t know what kind of a heartless, poor excuse for a human being could find an excuse to condone the slaughter of 1000’s of baby seals and yes, Mr Sullivan, they are babies. 12-15 days old is not ‘mature’. Mature is the word used by the soul-less murderers of these seals in an attempt to convince themselves that its OK and to help them feel better about themselves and their poor existence.

“Don’t they realize the hunt is strictly regulated and humane” – Please tell me, in your screwed up little world, how is routinely clubbing or shooting (at the very least) and leaving the seals to suffer on the ice until they’re clubbed later even remotely close to being humane? 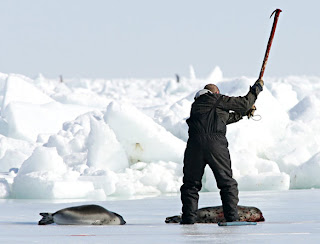 The only economically valuable part of the seal is its fur, a non-essential luxury product that no one really needs. – International Fund for Animal Welfare

Your attempt at witty jokes and sarcasm throughout your article was tiring and disgusting and quite frankly, i can’t believe you added that smug head shot to the article. By the feel of the article your quite obviously aware of the backlash this will reap and are probably pretty happy with yourself.

Don’t be – your disgusting.
For those of us who know this act is cruel and inhumane and don’t have to try and fool yourself into believing it isn’t, if you would like become more educated on the annual seal hunt or learn about how you can help go to
http://www.ifaw.org/
VancityBuzz.com