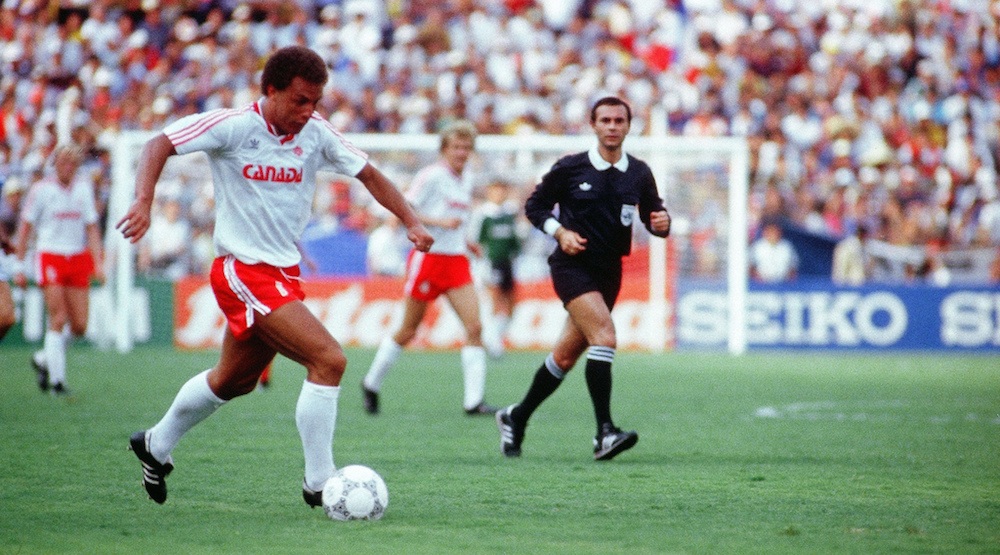 This year marks the 30th anniversary of Canada’s first appearance in the World Cup. We’re still waiting for the second.

Yes, it was 1986 in Mexico when Canada got its only taste of the global spectacle. Canada lost all three of their games, scored zero goals, and were eliminated after the group stage.

Of course the World Cup was much more difficult to qualify for back in those days. Just 24 teams qualified for the World Cup in 1986 – 32 teams are granted access now. In 2026, the number will grow to 40 teams.

Before the 1980s, just 16 teams played. Fewer teams meant fewer qualifying spots for CONCACAF, and less of a chance for Canada. Canada finished fourth in the final stage of qualifying in 1978 and 1982, when 1-2 teams qualified.

Canada was the second best team in CONCACAF in 1994, losing out to Mexico. USA was granted an automatic berth as hosts.

Ironically Canada’s decline has coincided with more spots opening up for the world’s tournament. The last time that Canada advanced to the final round of qualifying was 1998, when the number of spots allocated to CONCACAF expanded to three. Canada finished sixth.

Since then, a return to the World Cup has become somewhat of a pipe dream for Canadians.

With two games remaining in the second-last round of World Cup qualifying, Canada has an excellent chance at returning to the final round, the Hex.

Currently, they’re tied with Honduras for second in the group. With Mexico having already sewn up first place, these last two games – against Honduras on Friday (2 pm PT/5 pm ET) and El Salvador on Tuesday (7 pm PT/10 pm ET) – will likely decide which other team will advance.

Friday’s match will be in Honduras, a place that famously was not kind to Canada four years ago. They lost 8-1 to Honduras in 2012, which was the nail in their coffin for a 2014 World Cup bid.

Canada exorcised some of those demons in November, securing a 1-0 win at BC Place.

“Our players know perfectly that the battle will be on the pitch,” said Canada’s head coach, Benito Floro. “We can say that this will be a battle between 22 players and that the team that keeps their shape and tactical plan will have the best chance to win the match.”

BC Place is where Canada will play their last game of this round of qualifying, against El Salvador. Canada drew with El Salvador on the road, 0-0, in November.

A win in Honduras would likely be enough to get Canada through to the Hex, because it would require Honduras or El Salvador to beat Mexico.

“If we get three points, it puts us in the driver’s seat,” said Canadian defender David Edgar. “It’s in our hands and that’s the best way to look at it.”

Of course, in order to win, Canada will need to score at least one goal. Their next goal will double their goal output that they’ve accumulated through four games, so that could be a challenge.

A tie would set them up very well, and a loss would likely eliminate any realistic hope of advancing.

Honduras and El Salvador still have to play Mexico, who are the class of the group, but no longer have anything to play for (other than nationalistic pride, of course).

Just advancing as one of the final-six teams in CONCACAF would be a huge accomplishment for Canada at this stage of the game. That says something about the current state of the national team in Canada. They’re currently ranked 100th in the world. In CONCACAF, they’re ranked 11th, behind the likes of St. Kitts and Nevis (population 54,961), and Antigua and Barbuda (population 91,295).

Getting to the World Cup this year would seem unlikely, but you need to crawl before you run.

“Our players have demonstrated an excellent commitment along the way,” Floro said. “The players trust in their capacity to achieve a place in the Hex.”

Getting to the Hex would help get the ball rolling in the right direction. Canada needs experience playing good teams in meaningful matches. That will help with team cohesion, convincing future players to play for the maple leaf, and to get bums in seats for future home games.

First things first, they need a result in Honduras.