The Sweden-based research firm Tefficient has released a new report on the global wireless market, which revealed that Canada is in a league of its own when it comes to data usage.

Simply put, no other country has wireless carriers that generate more revenue with less data usage than Canada.

“Mobile data usage is still growing in all of the 36 countries covered by this analysis. But the growth rates are very different and so are the usage levels,” the company said in its report.

The annual analysis shows Canada is one of the wireless markets with the lowest growth in data usage in 2017, alongside Greece, the US, Latvia, Hong Kong, and Sweden.

A chart from the study looks at gigabytes used per SIM card plan in addition to the total mobile service revenues per gigabyte (in Euros).

According to the report, there are three countries where operators enjoy much higher total revenue per consumed gigabyte: Canada, Greece, and Belgium. 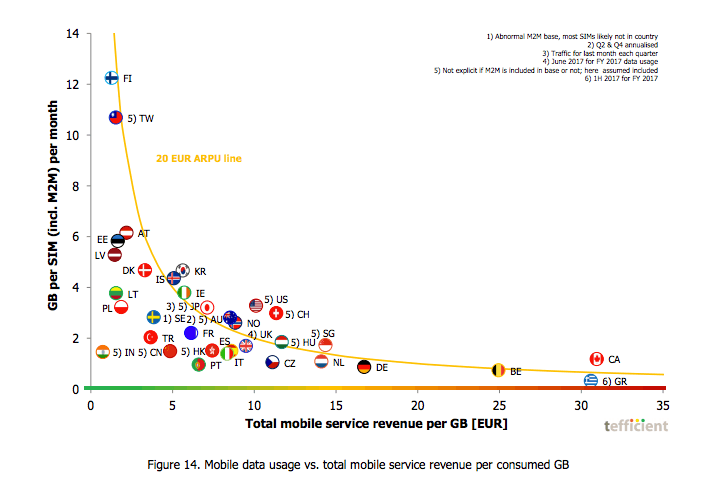 Canada leads the chart for the most revenue gained per gigabyte, just slightly ahead of Greece.

Additionally, another chart from the report shows that Canada is well on its own when it comes to the highest ARPU, which is the average revenue per user, yet the lowest usage.

This means Canadian telecom companies enjoy the highest revenues on the lowest data usage by their customers. 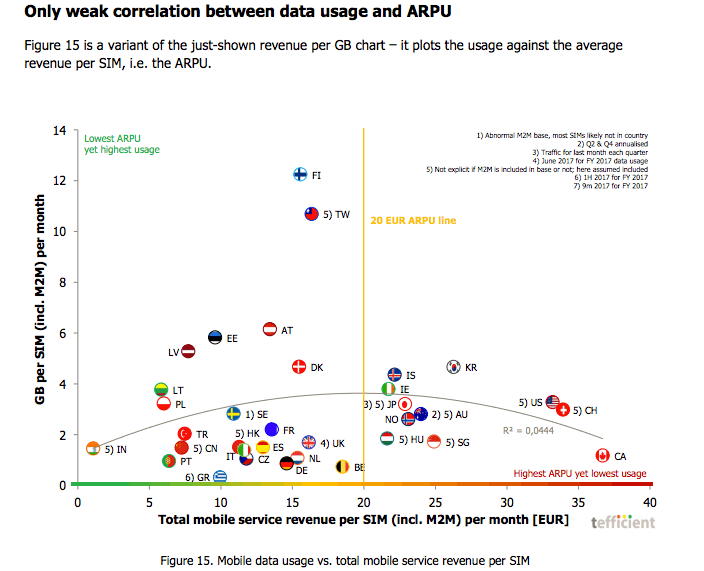 “Of our studied markets, there are three where operators derive ARPUs much higher than elsewhere: Canada, Switzerland and the USA,” reads the report.

But having the lowest data usage doesn’t necessarily mean the ARPU is low. According to Tefficient, “Canada, Switzerland and USA have the highest ARPU levels among the countries in our analysis.”

Because of this, Tefficient says, “Canadian consumers should be particularly unsatisfied with that – given how few gigabytes they can consume for that ARPU.”