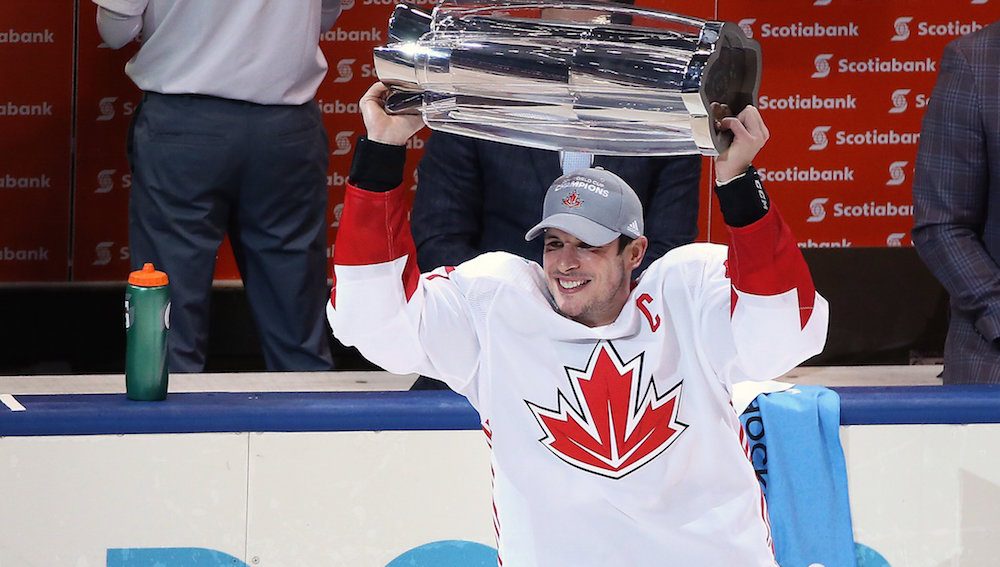 What a way to end it.

After making it look easy for the entire tournament, Canada had to scratch and claw their way to victory on Thursday night, beating Team Europe 2-1, winning the best-of-three Final two games to none.

For the first time ever, Canada won every game in a best-on-best tournament without needing overtime. Quite simply, Team Canada is the best team in the world.

For the first time in this tournament, Canada had to play significant periods of time trailing in the game. Zdeno Chara scored at 6:26 of the first period on a perfectly placed shot that beat Carey Price top-corner.

another angle of the Chara goal pic.twitter.com/45t3brFFyI

It was only the third time that Canada had trailed in the tournament. In the previous two times, Team Canada came roaring back immediately. It took them 1:29 to tie the game up against USA, and just 1:12 to equal Russia. Against Europe in Game 2, they trailed for 50:41.

And Europe was full value for the lead.

The result? The first moment of real desperation on the ice, and emotion in the stands.

2. Desperation in the third

Canada began to really push for the tying goal in the third period.

For the first time in the tournament, Mike Babcock juggled his lines, swapping Ryan Getzlaf and Jonathan Toews.

That determination spread to the other lines, and eventually resulted in Corey Perry forcing Anze Kopitar into a late penalty after some good work down low.

Patrice Bergeron tied the game up on the power play from a tip-in from a Brent Burns point shot.

They trailed with less than 3 minutes to play. #WCH2016 pic.twitter.com/Mn42Gi6K8m

Burns did well to get the shot off quick, rather than delaying for a slap shot. That didn’t allow Jaroslav Halak or the penalty killers to get set.

Drew Doughty took a penalty with 1:50 to go in the third period, which looked like it would either cost Canada victory, or force overtime.

Could Europe find a way to score their first power play goal of the tournament?

The answer was no.

Cue the heroics from Brad Marchand.

“When you get a penalty that late in the game, you’re just trying to force overtime,” Crosby said after the game. “And then Marchy comes down and buries one like that, pretty unbelievable feeling, considering  how hard we had to work to get our chances here tonight. It wasn’t easy.”

Marchand will get the glory, but the goal isn’t possible without the remarkable play from Toews. Toews backs off one defender below the hashmarks and draws two more with him. He then put a backhand pass onto Marchand’s stick in the slot. Marchand made no mistake, ripping a shot past Halak stick-side.

“My first thought was knowing it was a forward, to try and take him wide,” Toews said. “I didn’t have much left in the tank at the end of that shift, and I just heard Marchie yelling and I ended up dropping it to him. Lucky I didn’t turn it over again and go back the other way. That wouldn’t have been so good. It worked out perfectly.”

We haven’t talked a lot about Carey Price in this tournament, mostly because he hasn’t been needed. You might say he had been overlooked.

“I don’t think he’s been overlooked, he’s been unbelievable,” Joe Thornton said after the morning skate. “I think anybody that knows hockey knows that he’s an incredible goalie.”

Price was outstanding tonight, stopping 32 of 33 shots, in what was Canada’s sloppiest game defensively.

He made a huge save on a Marian Hossa breakaway with about 7:30 left in the first period to keep the score 1-0.

Some wondered how Price would perform in this tournament given he was coming off a long injury. Habs fans should breathe easily after this performance.

Shades of Mario Lemieux in the 2002 Olympics with this miss by John Tavares:

How awesome was it to see injured Team Europe player Marian Gaborik live-tweeting the game? Guess he wasn’t pleased with the Kopitar call.

Brutal call on Kopi. I guess these refs want to go home.

Drew Doughty played 25:33 in this one, a whopping number for someone on a loaded Team Canada roster. Doughty played physical the entire tournament and was a treat to watch.

Sidney Crosby was named tournament MVP. He was also a treat to watch, as he led the tournament in scoring with 10 points in six games. He’s never been better for Team Canada.

6. How we’ll remember this tournament

This tournament struggled with fan buy-in to begin with, and it struggled throughout as well.

The list of reasons for this is well known so I won’t rehash that here.

I think what the final game of the tournament proved is that there is great potential with the World Cup and that a lot of the apathy with the fanbase was due to Canada’s dominance.

Talk about the gimmicky teams and the money grab all you want, the biggest thing the World Cup was missing was drama surrounding Team Canada. Until fans believed they could lose, we didn’t see real emotion at the Air Canada Centre.

On Thursday night we got that, and it was terrific.