Prime Minister Justin Trudeau met with provincial and territorial premiers on Monday to discuss the impacts of climate change ahead of the UN climate change summit in Paris.

In a briefing just prior to a First Minsters’ meeting – the first held since 2009 – Executive Director at Ouranos Alain Bourque and Environment Canada Senior Scientist Greg Flato said climate change is causing Canada to warm at twice the global rate.

Essentially, a global increase of two degrees Celsius globally will mean three to four degrees for Canada. The effects could continue for hundreds of years since greenhouse gases are long lived and the oceans are warming.

The presentation, which is available in full here, suggests the arctic is warming even faster than Canada. Some key changes that have been noted in Canada as a result of climate change include longer growing seasons, an inability by Indigenous people to be able to predict the weather like their ancestors, thawing permafrost, and earlier river ice breakup.

In order to halt the process of climate change, the report says we need to lower our greenhouse gas emissions down to zero.

Here is a map outlining climate change in the country since 1948 – the Yukon and Northwest Territories appear to be warming the quickest. 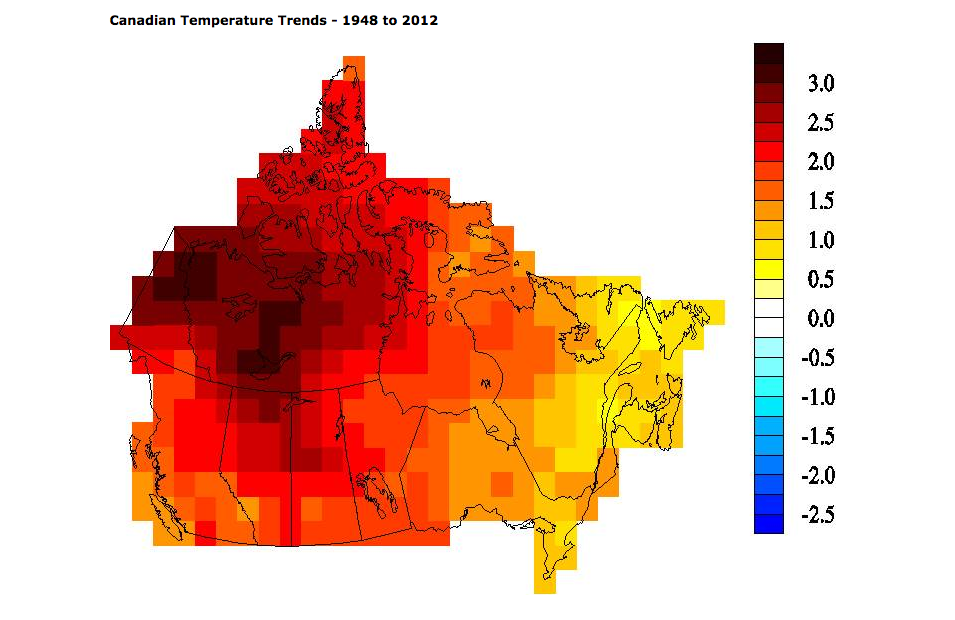 COP21, also known as the Paris Conference, will be held November 30 to December 11 in Paris France, and will see Prime Minister Trudeau engaging in negotiations with other countries towards a new global climate agreement.