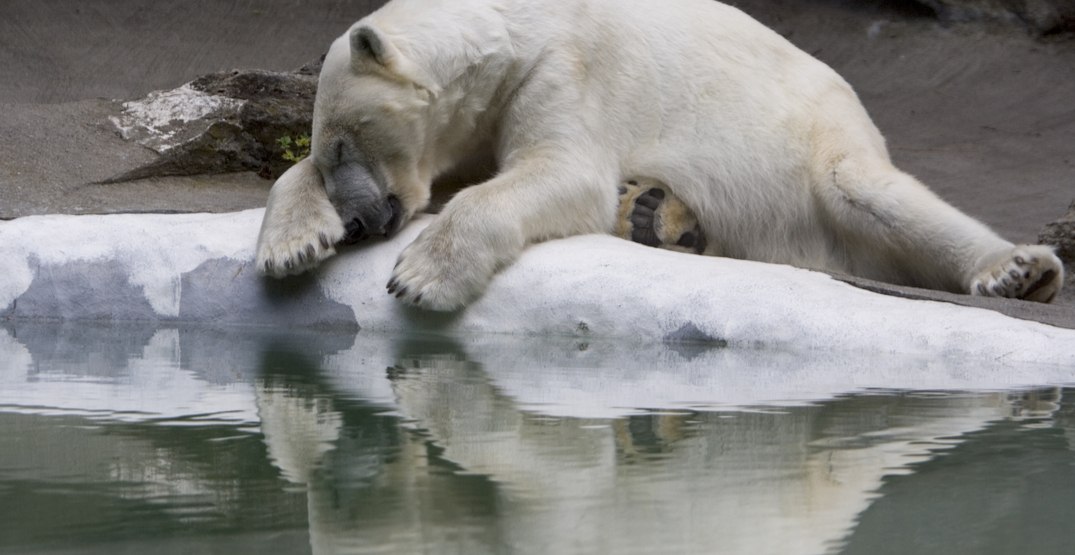 Canada is warming twice as fast as the rest of the world due to climate change driven by human influence, according to a new government report.

Canada’s Changing Climate Report (CCCR) is the first report to be released as part of Canada in a Changing Climate: Advancing our Knowledge for Action. The report was produced in collaboration with scientists from Environment and Climate Change Canada, Fisheries and Ocean Canada, Natural Resources Canada, and university experts.

According to the report, annual and seasonal mean temperatures across Canada have increased, with the greatest warming taking place in the northern regions of the country. 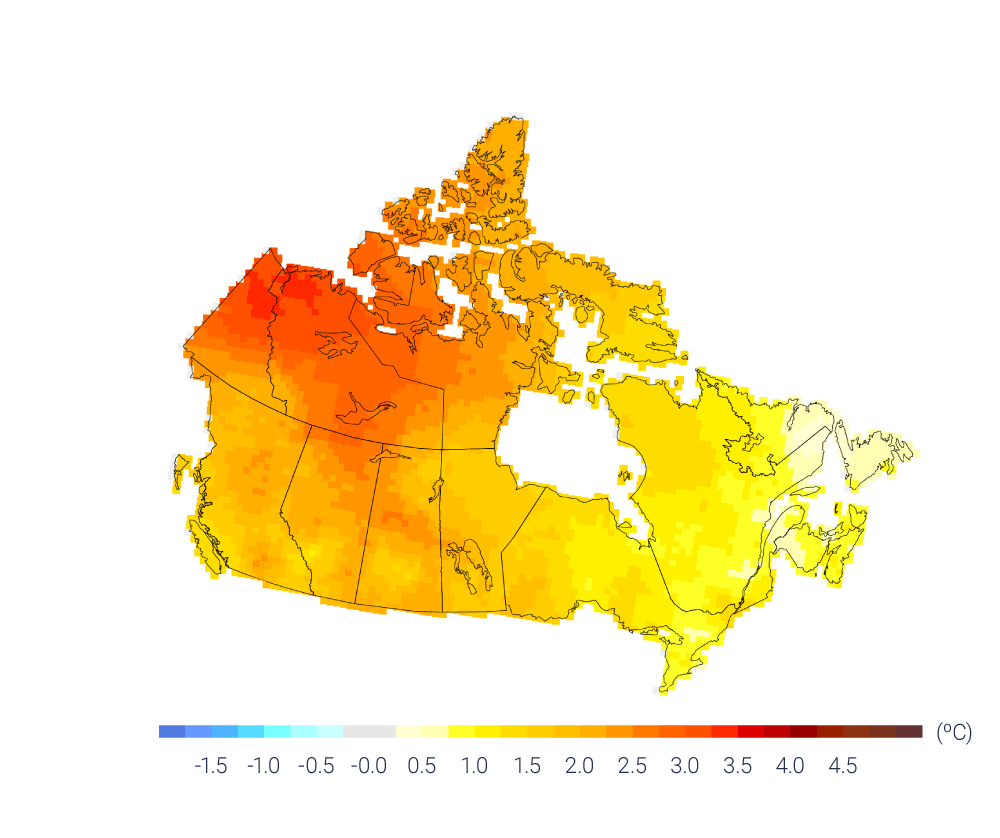 “More than half of the warming can be attributed to human-caused emissions of greenhouse gases. Climate models project similar patterns of change in the future with the amount of warming dependent of future greenhouse gas emissions,” states the report.

The report notes that northern Canada will experience “much larger changes” when it comes to annual and seasonal mean temperature increases.

Changes in climate extremes are often considered the most serious impacts of climate change. The report states that these extremes will lead to an increase of wildfires, droughts, and floods.

Canada’s warming climate has also lead to the depletion of snow and ice.  The proportion of the country’s land and marine areas covered by snow and ice have decreased, while permafrost temperatures have increased. 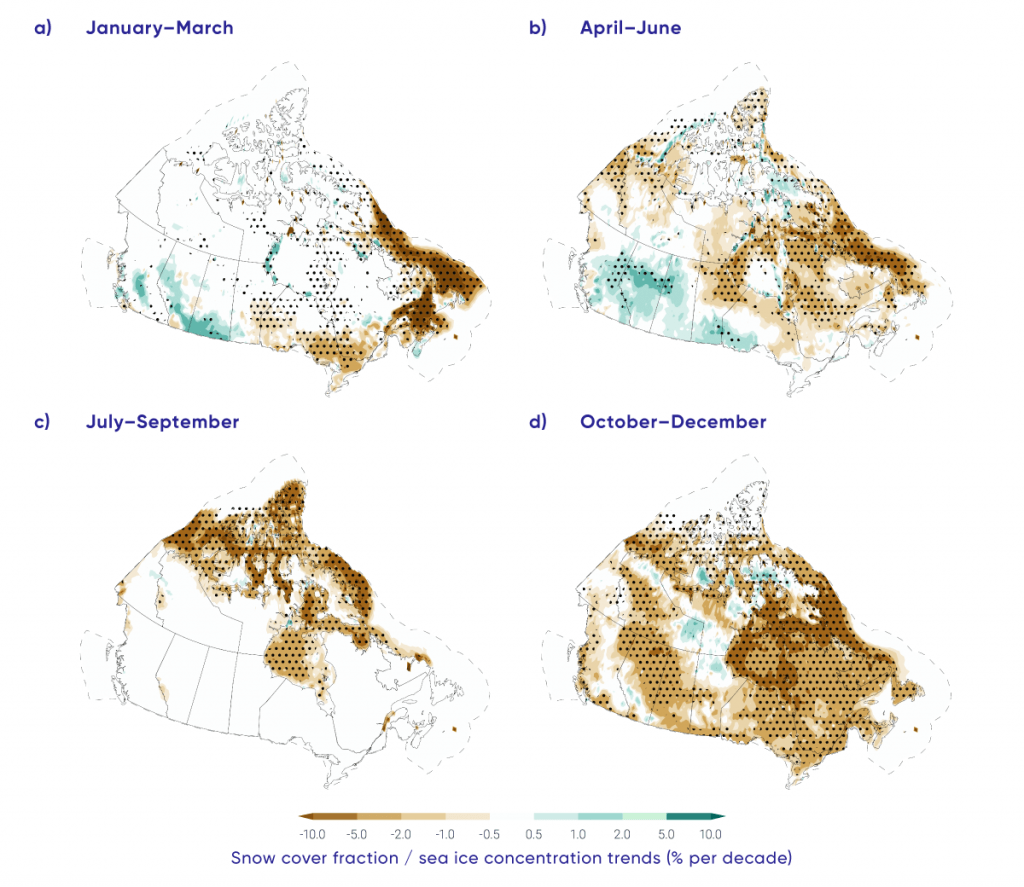 “These changes in the cryosphere in recent decades are in large part a response to increasing surface temperatures. Because some further warming is unavoidable, these trends will continue,” says the report.

With a “medium emission” scenario, researchers say the glaciers across the mountains of western Canada will lose 74% to 96% of their volume by late century.

“Most small ice caps and ice shelves in the Canadian Arctic will disappear by 2100. Increases in mean air temperature over land underlain with permafrost are projected under all emissions scenarios, resulting in continued permafrost warming and thawing over large areas by mid-century with impacts on northern infrastructure and the carbon cycle. ”

Melting ice and snow will result in rising sea levels. According to the report, sea levels are expected to rise most along the Atlantic and Pacific coasts of Canada as well as the Beaufort coast in the Arctic. 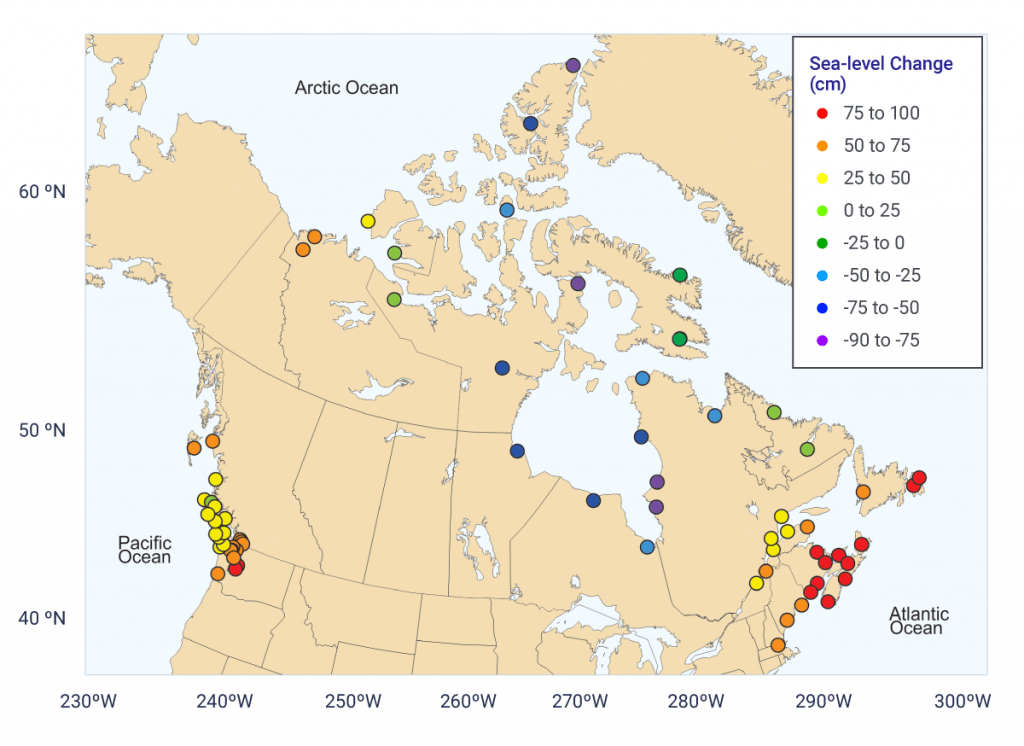 “The effects of widespread warming are evident in many parts of Canada and are projected to intensify in the future,” concludes the report summary.

“Scenarios with limited warming will only occur if Canada and the rest of the world reduce carbon emissions to near zero early in the second half of the century and reduce emissions of other greenhouse gases substantially.