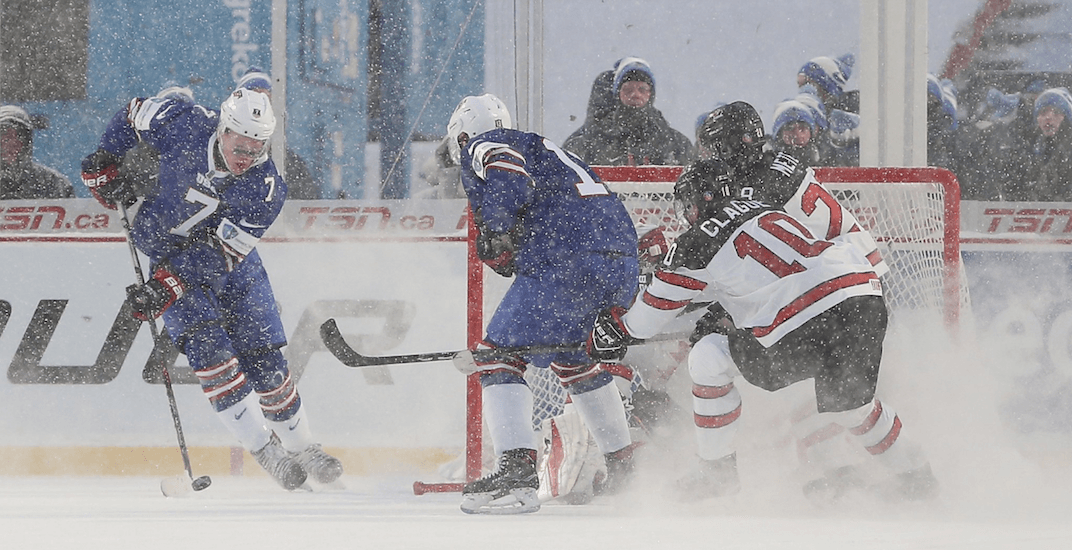 It was an outdoor snowy classic in Buffalo, as the game between Canada and the United States was decided in a shootout in front of a World Juniors record crowd of 44,592 on Friday.

Playing at the Buffalo Bills’ home stadium at New Era Field, Canada took a quick 2-0 lead in the first period. But the Americans, who were down 3-1 heading into the third period, came back to force overtime.

Just like the gold medal game in last year’s tournament, USA won the game in a shootout. The United States scored twice while not allowing a goal in the skills competition. Final score: 4-3.

Despite never having the lead during the run of play, USA held the lead in shots 35-22, outshooting Canada in every period.

Still, Canada has to feel like they let this one get away. They were in full control with a 3-1 lead in the third period before an undisciplined penalty turned the tide. They hit a goal post in overtime too.

No need to panic though, as Canada’s still in good shape in this tournament. They have what has to be considered a gimme game against Denmark on Saturday. If they win that in regulation, they’ll clinch first place in Group A.

Did I mention it snowed? I mean, it snowed A LOT.

We’ve seen outdoor games before, but I’m not sure we’ve ever seen one like this. The importance of the game, the rivalry between the two countries, and wintery scene made this a special game.

Because of the proximity of Buffalo to the Canadian border, fan support was split in the crowd too.

You know it's snowing heavily when the wheelbarrow comes out! Check out these snowy photos from the #WorldJuniors2018 #Canada vs. #USA game: https://t.co/vnf03f3Yzq #GoCanadaGo pic.twitter.com/8OUEjUmIKq

There's quite a bit of snow out here in Buffalo 🌨 pic.twitter.com/UYbDAGYZ3D

How to piss off a goaltender and a hockey team:

Give the 'tendy a massive snow shower in -10 °C weather. #WorldJuniors pic.twitter.com/0UEwYIFBHT

It was a mostly sloppy game, as ice conditions were poor due to the snow. Both teams were forced to keep it simple.

Defenceman Cale Makar made it 1-0 for Canada early, scoring a power play goal on wrist shot from the point.

.@Avalanche prospect Cale Makar scores the first ever outdoor goal in the history of the #WorldJuniors to give @HC_WJC a 1-0 lead. pic.twitter.com/C4DkA2cR8n

Canada padded their later on in the first period, scoring again on the power play. Calgary Flames draft pick Dillon Dube made it 2-0, converting a nice pass from Sam Steel.

After a pair of penalties put Canada down 5-on-3 late in the second period, the Americans finally got on the board. Kieffer Bellows, son of former NHLer Brian Bellows, ripped home a slap shot to give Team USA life.

What a blast from @NYIslanders prospect Kieffer Bellows to get @usahockey on the board.#WorldJuniors pic.twitter.com/FaC0ClKTEM

After a bad penalty by Canada gave USA a power play, Scott Perunovich made the visitors pay.

34 seconds after @usahockey made it a 3-2 game, Brady Tkachuk ties it up for #USAWJC. We're deadlocked at 3-3 with just over halfway left in the third period. #WorldJuniors pic.twitter.com/3sAAVK9l8W

Canada has one more preliminary round game against Denmark, which will be played at 5 pm PT (8 pm ET) on Saturday. The quarterfinals begin on Tuesday, January 2.