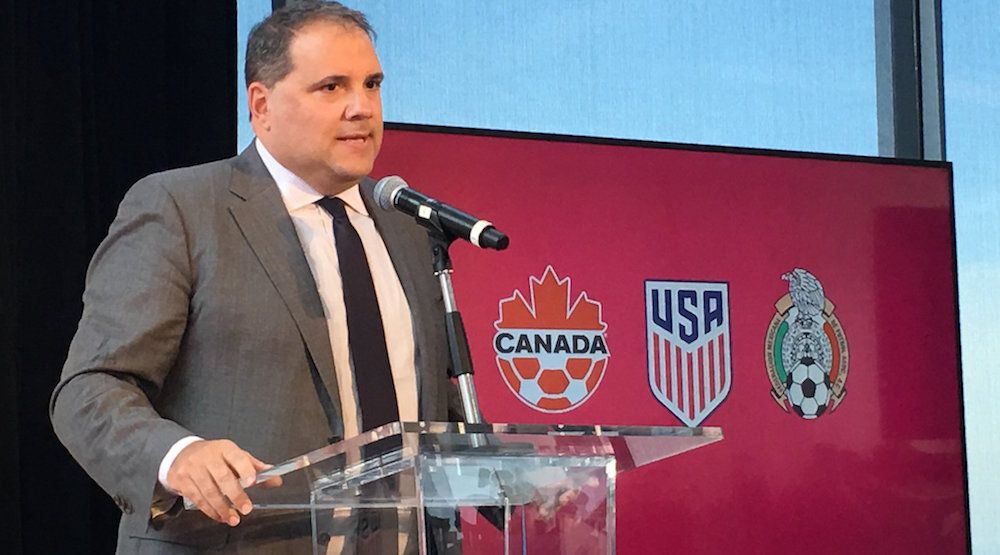 The biggest sporting event in the world could soon be coming to Canada.

Canada, USA, and Mexico officially declared their intention to submit a unified bid to host the 2026 FIFA World Cup on Monday. Making the announcement from atop the One World Trade Center in New York City, organizers have big plans.

The World Cup will be expanded from a 32-team tournament to 48 teams in 2026, making the multi-country bid more sensible. Given that countries from Europe and Asia are ineligible from bidding on the 2026 World Cup, the CONCACAF-led bid is considered the heavy favourite to land the tournament. Should they win the right to host, it would be the first time in World Cup history that three countries have hosted the global spectacle.

“Canada has already proven itself as a formidable host for the world’s game, setting FIFA records for attendance at the FIFA U-19 Women’s World Championship in 2002, the men’s FIFA U-20 World Cup in 2007, and the FIFA Women’s World Cup Canada 2015,” said Victor Montagliani, president of Canada Soccer and CONCACAF. “We look forward to continuing our successful collaboration with fellow CONCACAF member associations US Soccer and Federación Mexicana de Fútbol Asociación under the FIFA Council principles for joint bids and to continue our tradition of hosting record-breaking international events.”

Both USA (1994) and Mexico (1970 and 1986) have hosted the World Cup before. Canada has never hosted the tournament, and hasn’t participated in the World Cup since its lone appearance in 1986.

While USA and Mexico are likely able to host the tournament on their own, the expanded format will require more facilities and infrastructure than ever before. For that reason, a joint-bid to share costs makes a lot of sense.

“This is an important step for Canada Soccer as we continue discussions with our partners,” said Peter Montopoli, General Secretary, Canada Soccer. “As we work through the next steps with our partners and stakeholders, we look forward to outlining a more comprehensive plan in the coming months. A unified bid between Canada, USA, and Mexico for the 2026 FIFA World Cup will help ensure a world-class event for the world’s most popular sport.”

A successful World Cup bid would do wonders for growing the game in Canada. While the sport of soccer is popular across the country, Canada’s Men’s National Team has struggled mightily since the mid-1990s.

If hosting the 2026 World Cup could do for Canada what hosting the 1994 tournament did for USA, it would be an enormous boost for soccer in Canada.