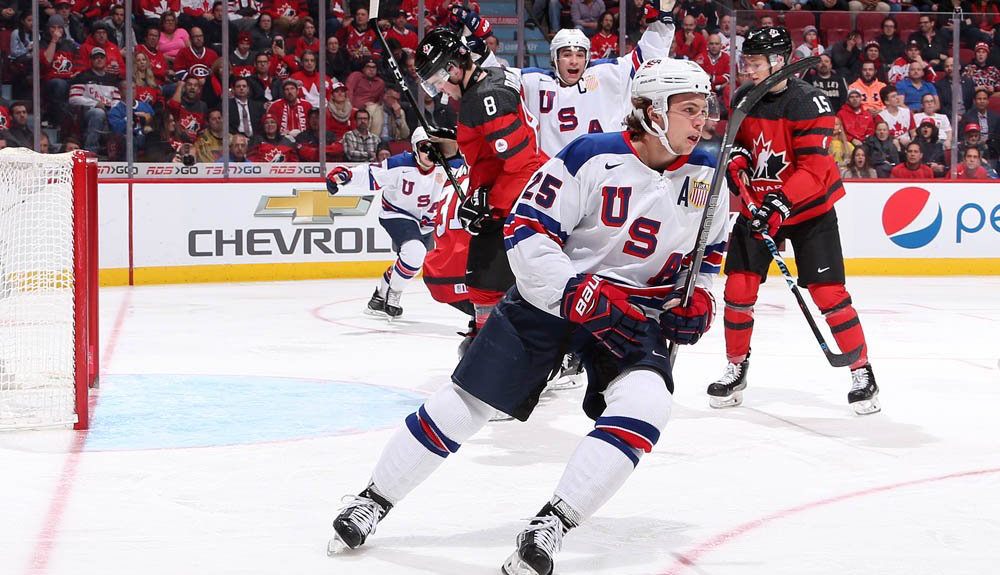 The United States eventually prevailed to capture gold, beating Canada in a thrilling back-and-forth game that ended in a shootout, 5-4 the final score, on Thursday.

Though heartbreaking for Canada, they have nothing to be ashamed of. Both teams put on a show for fans, playing the game the way it was meant to be played…. Well maybe except for the shootout part.

Here’s how it all happened.

Playing in front of a raucous crowd in Montreal, Canada came out aggressive but controlled in the first period. Less than five minutes in, the hosts got on the board first.

After throwing down American forward Colin White at one end, defenceman Thomas Chabot got on his horse and joined the rush to finish off a pass from Mathew Barzal to make the score 1-0.

Chabot would go on to have more than 43:53 of ice time and was superb.

Before the 10-minute mark of the first, it was another defenceman scoring for Canada. Jeremy Lauzon picked up a loose puck and wired it past US goalie Tyler Parsons to double Canada’s lead.

The goal was Canada’s second on just three shots. Lauzon started the tournament as a seventh defenceman but moved up the depth chart by virtue of Philippe Myers suffering a concussion.

Canada outshot the US 10-6 in the opening period.

USA ties it up

Team USA worked to get back into the game in the second period, outshooting Canada 13-11.

The Americans played well, but Canada shot themselves in the foot with poor line changes.

A bad change allowed defenceman Charlie McAvoy to be wide open, receive a pass, walk into the slot, and rip a shot past Carter Hart.

All confidence from McAvoy as he rips it past Hart to cut the Canada lead. @CanadianTire #BigPlay #WorldJuniors https://t.co/JLvAqi0ZFz pic.twitter.com/7ZCgiGwHhg

Canada got caught for too many men on the ice just over five minutes later, and the Americans made them pay for it.

After a won faceoff, defenceman Adam Fox sent a shot from the point towards the goal that was deflected twice, with the goal credited to Kieffer Bellows.

Mathieu Joseph was knee’d, giving Canada a power play. Nicolas Roy made the US pay, ripping a wrist shot past Parsons for a 3-2 lead.

Joseph left the game briefly, but came back in time to blow by the American defence and score on a breakaway at the 4:05 mark of the third.

But Team USA was undeterred, cutting the lead in half 39 seconds later on a one-timer by Bellows for his second goal of the game. Just 2:23 after that, the US struck again, when White deflected another smart point shot by Fox.

The Americans outplayed Canada for most of the second half of the third period, but couldn’t take the lead. Canada had perhaps the best chance to score though, when a back-and-forth passing play led to Barzal feeding Pierre-Luc Dubois, who whiffed on the pass with an open net.

Overtime was filled with many nervous moments at both ends, with Canada outshooting the US 17-7.

Team USA was called for too many men on the ice at 6:44, but Canada couldn’t deliver on the power play.

After 20 minutes of overtime, both teams were unable to end the game.

The second shootout in World Junior Championship history was a goaltender’s duo. Goaltenders stopped all but one shot, that of American Troy Terry, who beat Hart five-hole.

Troy Terry scores in the 4th round (w/bench reaction) pic.twitter.com/kZxiYqEawh

Terry shot three times in the shootout in the semi-final against Russia, scoring five-hole all three times.

Though gut wrenching for Canada, this was an absolute classic and will stand up as one of the best gold medal finals in World Juniors history.