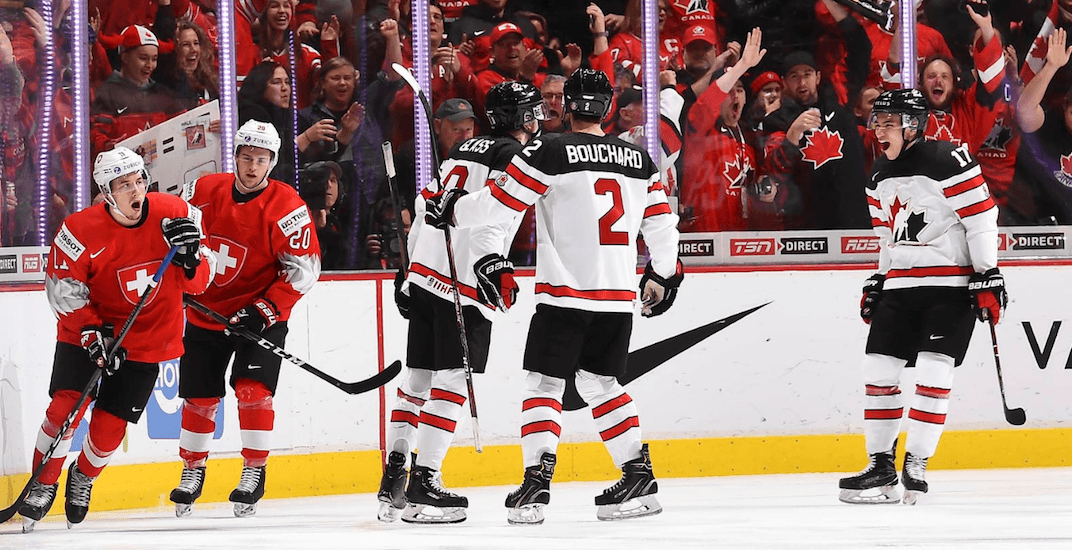 It wasn’t as dominant as the 14-0 win against Denmark, but Canada got the job done in their second game at the World Juniors with a 3-2 win against Switzerland on Thursday.

It looked like we might be in for a repeat of Wednesday’s game when it took Cody Glass just 35 seconds to open the scoring for Canada.

Switzerland settled into the game after that, tightening up to keep it 1-0 after the first period.

Things looked a little dicey to start the second period when Switzerland scored on the power play. Canada was under pressure for a few shifts, and would have found themselves behind in the game if not for a big glove save by Ian Scott.

Canada got back in control of play after that save and retook the lead a minute later off a goal from MacKenzie Entwistle.

MacKenzie Entwistle (@BulldogsOHL) off the feed from Shane Bowers, and Canada's back on top!#WorldJuniors 🇨🇦 #REPRESENT pic.twitter.com/CZCV94mn8d

Later in the second period it was Noah Dobson scoring five-hole to give Canada a 3-1 lead.

Switzerland had an opportunity to get back into the game with a power play early in the third, but Canada stymied them with an excellent penalty kill.

Canada had the game in cruise control from then on until another power play goal for Switzerland made things interesting.

Philipp Kurashev's second goal of the night cuts the deficit to 3-2 with 1:49 left in the game for Switzerland 👀#WorldJuniors #Represent pic.twitter.com/N9GjUTjmXr

With the score 3-2 and only a few minutes of play remaining, Canada fended off Switzerland’s last minute push to win their second game of the tournament.

Despite the scoreboard, Canada dominated for most of the game and held a 32-15 edge in shots.

Barrett Hayton – one of seven Canadian skaters to record a point – was named the Player of the Game for Canada.

The team will have Friday off and get back in action on Saturday night against the Czech Republic.