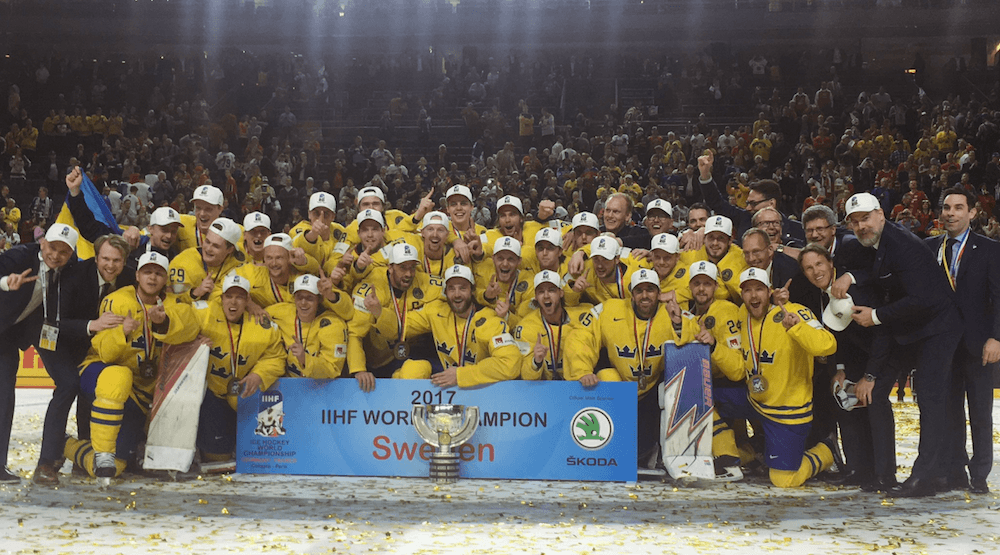 Canada’s run at the IIHF World Championships has come to a disappointing end, as they lost to Sweden 2-1 in a shootout in the gold medal game on Sunday.

The loss ends Canada’s two-year run as gold medallists in the tournament. The win is Sweden’s first gold medal since 2013.

This is the first time the gold medal game has been decided in a shootout since 1994.

Nicklas Backstrom and Oliver Ekman-Larsson scored the only goals of the shootout, as Henrik Lundqvist stopped all four shots he faced, including the final shot against Mitch Marner to clinch gold.

KING LUNDQVIST AND SWEDEN ARE THE WORLD CHAMPIONS! pic.twitter.com/pREXoIxNaw

This was an evenly played game from start to finish – the shots were 43-42 for Canada – with the first goal of the game coming late in the second period.

Outshooting the Swedes 12-6 in the middle frame, Canada received a late-period power play after an undisciplined play by Nicklas Backstrom. It should have been a big break.

Instead, it led to Sweden’s breakthrough.

A comedy of errors with the man advantage began with a bobble of the puck by Ryan O’Reilly at centre ice.

Victor Hedman got credit for the goal for Sweden, after he sent a bouncing backhand shot towards the net. The shot appeared to hit O’Reilly’s stick, went past the waving stick of Nathan MacKinnon, before two Swedish players nearly tipped it as well. That fooled Team Canada goaltender Calvin Pickard, who was anticipating a deflection and allowed the shot to go through his legs.

Victor Hedman throws a backhander through traffic and the bouncing puck eludes Pickard to put Sweden up 1-0 in the #IIHFWorlds final. pic.twitter.com/cvdP1S56DJ

Weird goal, but they all count.

Just like the semi-final against Russia, Canada would need a third-period comeback to keep their gold medal dreams alive, and that’s exactly what happened.

Team Canada got a huge break early in the third period when Elias Lindholm was called for a high sticking penalty. Travis Konecny embellished the call, whipping his head back despite the fact that the stick only touched his jersey.

This time, Canada made their power play count.

O’Reilly scored on a rebound from a Mitch Marner point shot, levelling the game at one.

Twenty minutes of overtime solved nothing, despite some breathtaking back-and-forth action. MacKinnon had two glorious chances to win the game, and Alex Killorn missed an open net chance wide.