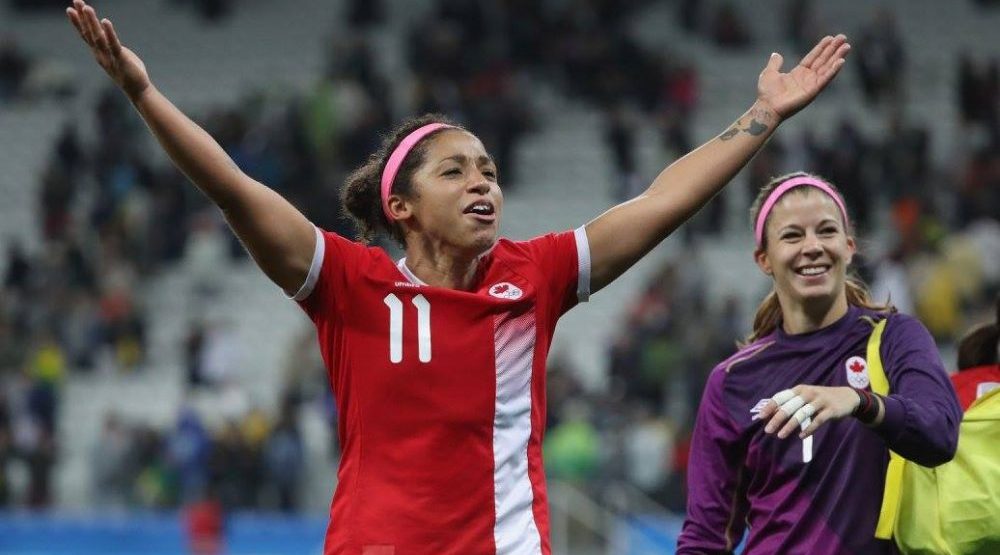 On the heels of winning their second straight Olympic bronze medal, the Canadian women’s national soccer team has been recognized for their excellence.

Canada has risen six six spots, from #10 to #4, in the FIFA rankings. No other country rose by more than four spots. They trail only USA, Germany, and France, who remain the top-3 teams in the world.

This is a historic moment for Canada, as it is the highest ranking in our country’s history. Previously, the highest Canada had ever been ranked was seventh, a ranking they held between 2011 and 2013. The women’s national team now ranks ahead of passionate soccer countries like England and Brazil.

The Canadian men, in case you are wondering, are ranked 100th in the world, well back of the likes of the Cape Verde Islands (#58) and Burkina Faso (#73).

Coming into Rio, there weren’t high expectations put on Canada. Head coach John Herdman, perhaps purposefully, referred to his team as underdogs. Indeed, this was a new group with a number of young players coming into the fold after Canada’s quarter-final exit at the World Cup last year.

There had to be people wondering if the 2012 bronze in London was a fluke result for Canada. After all, that group needed heroic performances from Christine Sinclair throughout the tournament, along with a lot of luck to beat France in the bronze medal game.

But Rio 2016 should put to bed any dispersions, and their ranking reflects that. While Canada got the same reward, bronze, this was a more impressive tournament. This year’s group was deeper and more well-balanced. They faced tough competition, beating #2 Germany, #3 France, #5 Australia, and #8 Brazil.

And the best news? With a number of young players with bright futures, Canada could continue to be on the rise, despite the fact that Christine Sinclair is entering the twilight of her career.

As you can imagine, many of the team’s players were over the moon with this news, taking to Twitter to express their thoughts:

When u wake up to the news that your team is now ranked #4 in the world! WOW So amazing! #hardwrkpaysoff #history 👏🏽 pic.twitter.com/3hwZJE39nG

Waking up to see this… Highest ever ranking for Canada! So incredibly proud to be a part of this team🇨🇦🙌🏽 #canWNT pic.twitter.com/B0jVzqCTk8

This is neat!#WorldRanking #4#CanWNT So proud of this team and grateful to those who have paved the way. https://t.co/1tMMX0dKco

To all that came before, and all that are to come. This is who we are. Proud of what we've done! 🇨🇦 https://t.co/o43gmkCYou

Highest ranking ever! Thank you @coachherdman & so proud of our team/program! Thank you Canada for your support! 🇨🇦 pic.twitter.com/C8BGov8JrD

Wow. Highest ever ranking for Canada. Proud to be a part of this program! pic.twitter.com/5EaxUzx2eu