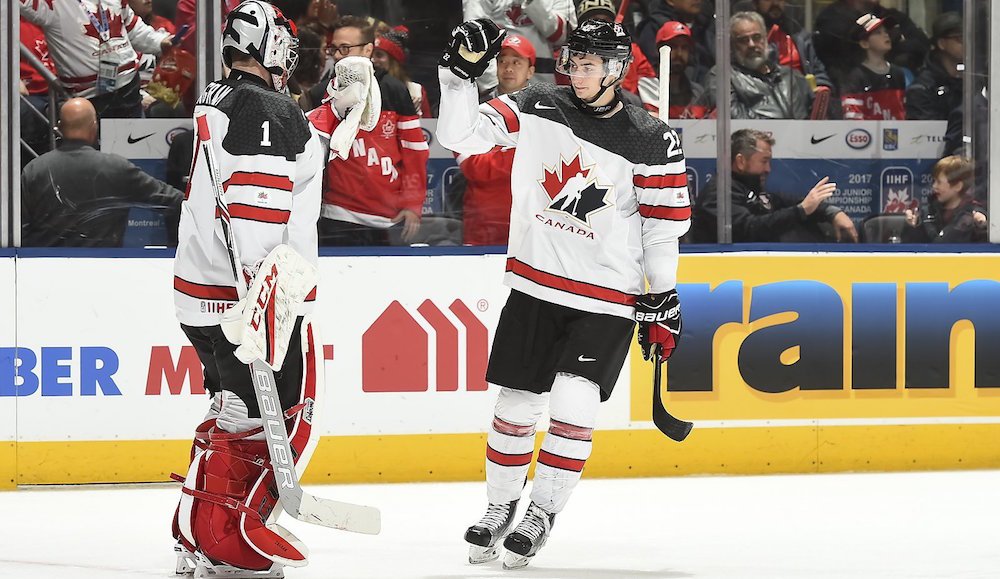 Having faced one of the stronger teams in the World Juniors on Monday in Russia, Canada was greeted by an inferior Slovakia team on Tuesday.

Team Canada held control of the play throughout the game, and after a bit of a feeling out phase in period one, hit the score sheet in bunches.

The power play continued to thrive with another two goals this game, and Canada received balanced scoring with five unique goal scorers, and ten players recording at least one point.

Connor Ingram got the start in goal for Canada and though he wasn’t busy, he made the saves when needed to get the shutout in a 5-0 win.

“We stuck with our game and we stuck with our identity,” Team Canada head coach Dominique Ducharme told TSN after the game. “I think guys really played an unselfish game and played together. That was overall a pretty solid game, especially the second and third.”

The Canadians didn’t look as strong against Slovakia in the first period as they did against Russia yesterday. Though they outshot their opposition 14-2, most of the shots were from the outside, not forcing Slovak goaltender Adam Huska to make too many difficult saves.

Shots 13-2 Canada but Slovakia did a good job keeping them to the outside. If they can keep it tied into the third, anything can happen.

Jost the spark once again

For the second game in a row, it was Tyson Jost getting things going for Canada.

Against Russia, Jost opened the scoring on a beautiful move to the backhand that he buried top shelf.

Today, the Colorado Avalanche prospect set things up with a sweet dish for defenceman Jeremy Lauzon, who ripped one home to open the scoring.

Once the spark was provided by Jost, the rest of Team Canada responded.

First, it was Taylor Raddysh roofing one over the glove of Huska to double Canada’s lead.

A nice pass by Dubois leads to this Raddysh goal. 2-0 Canada pic.twitter.com/Jix7uuTn6R

It was yet another power play goal for Canada, who now have four in just two games this tournament.

Just a few minutes later it was another goal for Canada when Anthony Cirelli deflected a shot by Lauzon that went bar down.

Chabot puts Canada up 4-0. Slovakia is struggling to contain an endless stream of offense. pic.twitter.com/qFO1Ksc3ZF

This time it was Thomas Chabot getting his first of the tournament, scoring Canada’s fourth goal on their 31st shot of the game. Slovakia, meanwhile, had just three shots on net after 40 minutes.

It took just a few minutes into the final frame for Canada to get their fifth goal when Michael McLeod drove to the net and chipped a feed past Huska.

No shots for Slovaks

Okay, maybe not no shots, but the Slovaks really struggled getting any king of offence going against Canada. In fact, they tied a World Junior record for fewest shots ever in a game with six. The only other team to do that was in 2000, when Belarus also had just six against Canada.

In the end, Canada never faced any sort of adversity in this one, winning 5-0 and outshooting Slovakia 45-6. It was as one-sided as it gets.

Team Canada will have a day off on Wednesday before getting back in action Thursday against Latvia (5 pm PT / 8 pm ET on TSN).