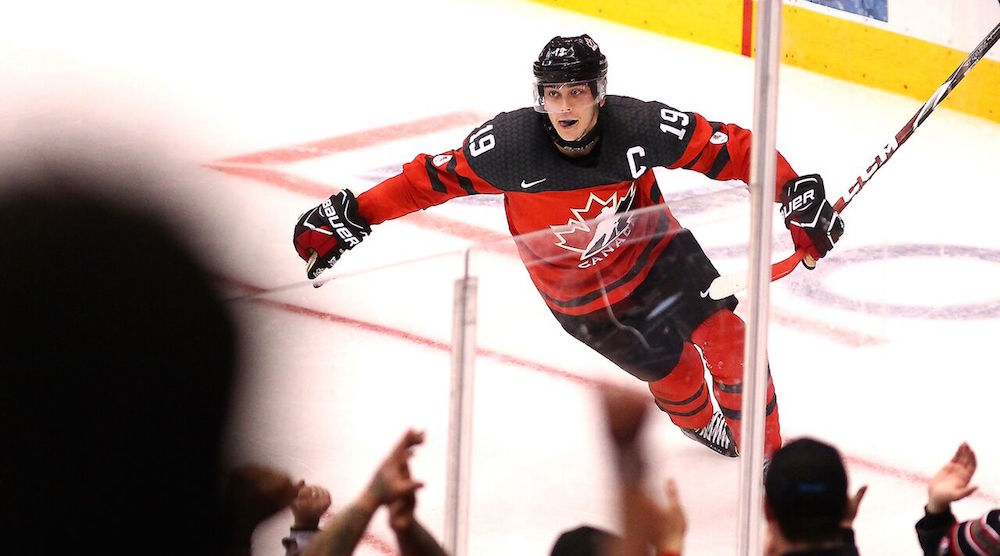 Tournament organizers aren’t fooling around this year, beginning with Canada-Russia on Day 1 of the World Juniors. These two great hockey rivals never seem to disappoint entertainment-wise, and Monday’s game at the Air Canada Centre in Toronto – filled with goals, chippy play, and taunting – was no exception.

The story of this game was discipline. Russia gave Canada six power plays to work with, and the host country made them pay. Canada was clinical, scoring three times with the man advantage on the evening.

“A real good start for us, a pretty spirited game,” said Team Canada captain Dylan Strome. “Both teams were definitely fired up and ready to play.”

Here’s how it all happened:

Canada got off to a great start in this one, taking the lead 3:11 into the first period. Kelowna’s Tyson Jost scored on a beautiful deke to the backhand after being set-up with a terrifically patient play by defenceman Philippe Myers.

Interesting thing about Myers, he’s 6-foot-5 and skilled. Somehow he went undrafted in the 2015 NHL Draft. Amazing how that could possibly happen.

@RobTheHockeyGuy he's had a sprained knee, torn labrum in his hip and pubic plate detachment. Had to play through some of it too

Revenge of the fist pumping Russians

Canada was in full control for half a period until Canadiens first rounder Mikhail Sergachev’s shot through traffic found the back of the net. It was only Russia’s second shot on net in the game.

The game remained deadlocked at one for over 23 minutes of game time, until Canada began to take over.

With Canada on the power play, defenceman Thomas Chabot dragged the puck into the middle of the ice, feeding Matthew Barzal, who froze everyone and set up Strome with a great pass through Russia’s box. Strome made no mistake, converting on a one-timer that beat Russian goaltender Ilya Samsonov.

While the 2-1 goal was pure skill and execution on the power play, the goal to make it 3-1 was all grit and determination.

After stealing a pass and setting up his teammate in the slot, Nicolas Roy decided to do the job himself. He asserted himself, bumping everyone out of the way – including his teammate – and scoring on a wrist shot to the stick side.

Before extending their lead, Canada was lucky not to fall behind. Russia hit a post with under nine minutes left in the second period with the score 1-1.

They could have also fallen behind if not for the effort of Sault Ste. Marie’s Blake Speers on the penalty kill.

Speers broke his stick, but bravely dove in front of shots.

There was no hesitation from Speers, who broke his wrist in his only OHL game this season. He’s played in just four games this season, one with Sault Ste. Marie, and three with the New Jersey Devils.

Trading goals in the third period

Canada made it 4-1 just over three minutes into the third period. On the power play, Barzal was set-up in front by Pierre-Luc Dubois, who worked hard to gain possession behind the net.

Just over two minutes later, Russia got it back, as captain Kirill Kaprizov fired a wrist shot from the slot that beat Hart.

For some reason, Yegor Rykov decided to taunt the Canadian bench…

Imagine what he would do if Russia was winning? Presumably the Canadian bench told him to look at the scoreboard.

Less than four minutes later, Canada converted on an undisciplined penalty by Russia, with Strome getting his second of the game off a rebound from a shot by Barzal.

Strome gave it back to the Russian bench.

Rykov got a goal of his own to hot dog shortly after, scoring on a bad angle shot just inside the faceoff circle.

But that’s as close as Russia would come, as Canada won 5-3. Can these teams please meet again in the medal round?

“It’s a huge advantage for us [to play] against a team like Russia right out of the gate,” Barzal said. “You get into the tournament, diving head first, and it’s nice to get a real tough team under our belt so we aren’t starting behind the eight-ball like we did last year. We just need to keep ‘er going, and we need that effort every night.”

Canada will play their second game of the tournament on Tuesday against Slovakia (5 pm PT / 8 pm ET on TSN).