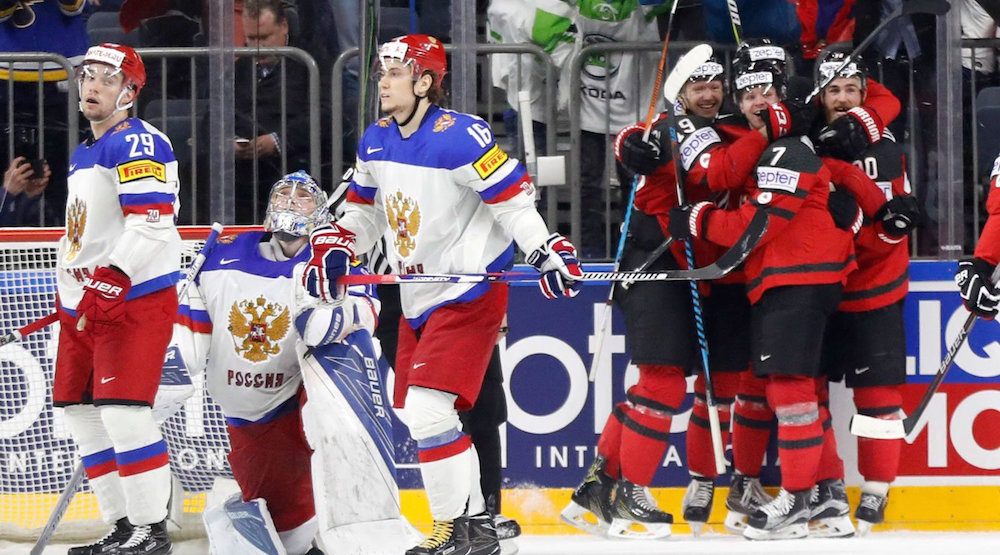 Canada will play for gold on Sunday after a dramatic third-period comeback victory, defeating Russia 4-2 in the semi-final at the IIHF World Championships in Germany.

After a scoreless first 20 minutes, Russia got on the board first in the second period, meaning that Canada had to play from behind for the first time in the tournament. Washington Capitals centre Evgeny Kuznetsov converted a cross-ice pass from Artemi Panarin at 12:16 of the period to open the scoring, before Nikita Gusev scored on a pass from Vegas Golden Knights forward Vadim Shipachyov less than three minutes later.

The speed of the Russian forwards appeared to give Canada’s defence fits throughout the first two periods. Also plaguing Canada was penalty trouble, as they gave Russia four opportunities on the power play through the first 40 minutes.

Down 2-0 heading into the third period, Canada needed an inspired effort in the final 20 minutes.

“We weren’t skating,” Canada’s Nate MacKinnon told TSN after the game. “[Our coach Jon Cooper] told us to use our feet. I think we’re the fastest team here.”

“Two-goal lead is the worst lead in hockey. You get one and everyone tightens up.”

Canada got on the board 17 seconds into the third, getting a power play goal from Mark Scheifele, who scored on a tip from a shot/pass from MacKinnon.

Russia was under siege after that, getting outshot 19-5 in the third period.

MacKinnon scored a huge goal with under five minutes to play to tie the game, converting a pass from Travis Konecny.

Less than two minutes later Ryan O’Reilly scored the go-ahead goal, with the help of a Mike Matheson pass and a lucky bounce, to give Canada a 3-2 lead with 3:02 left.

WATCH: From no goals in the 1st and 2nd periods to 3 goals in the 3rd, Ryan O’Reilly’s goal changed the tides for @HC_Men. #IIHFWorlds pic.twitter.com/gLQqs2WZQ5

Sean Couturier added an empty netter to ice the game and give Canada a chance at a third straight gold medal.

Avalanche goalie Calvin Pickard made 26 saves, including some difficult ones when the score was 2-0, to get the win.

“We stopped thinking, we just started playing hockey again,” said O’Reilly, who had two points and was Canada’s best player. “Once that happened, we took over.”

“I walked into the room and there was a little tension,” Cooper said of his team during the second intermission. “Somebody blurted out ‘it’s okay boys we’ve got them right where we want them’ and it calmed the whole group down.

“We knew we had it in us and we knew we were on our heels a lot because we were killing penalties the whole time. I think the big thing for us, we took a breath in the locker room, went out and scored a power play goal, and right then you could see the weight go off our shoulders; after that we played a heck of a third.”

Canada will play the winner of the other semi-final between Sweden and Finland in the gold medal game on Sunday (TSN, 11:30 am PT / 2:30 pm ET).