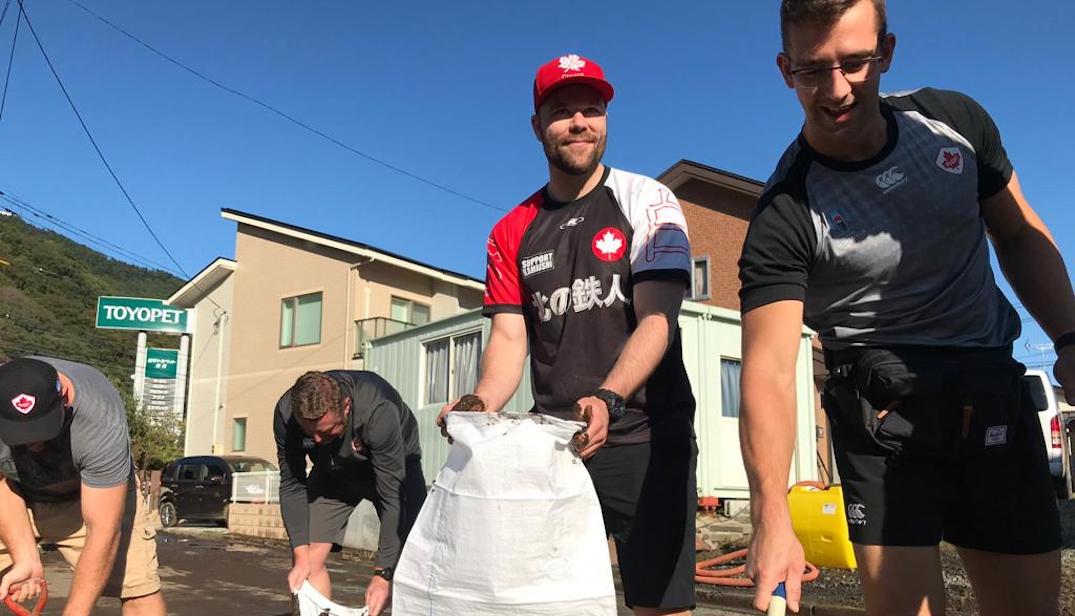 While Canada’s rugby team may not have walked away with a trophy at the Rugby World Cup, the Canadians are being hailed as heroes in Japan.

Due to Typhoon Hagibis, Team Canada’s game was cancelled.

The team learned that their match against Namibia, which was their best and last chance to earn a win at the Rugby World Cup, was cancelled on Sunday.

But as disappointing as it was, the team also learned about the city they were staying in, and the history of Kamaishi.

And within hours of the destruction of Typhoon Hagibis, the Canadian players were out on the streets helping locals with clean up operations.

Hagibis was estimated to be the strongest typhoon to hit Japan in more than half a century, and for locals, it brought back memories of March 11, 2011, when much of the city was washed away by a massive tsunami.

“Heartfelt thanks to Rugby Canada for supporting the people of Kamaishi in the cleanup efforts following Typhoon Hagibis,” tweeted World Cup Rugby Japan.

Many Japanese residents were showing their gratitude on social media, and invited the team to return to Kamaishi.

Canada team helped local people clean up a mud messy road after the strong typhoon. We really appreciate it. After that they enjoyed spend some time with local people! Welcome to Kamaishi. We’re hoping that you are coming back again!

World Rugby said the Canadians had shovels in hand and cleaned several side streets of the mud and debris left by the overflowing river nearby.

The efforts of Team Canada was also recognized by Liberal Leader Justin Trudeau. He called their actions “true Canadian spirit.”

True Canadian spirit from @RugbyCanada. We’re thinking of the victims and everyone in Japan who’s been affected by this devastating typhoon. https://t.co/9ppIxkUslp

Kamaishi was under a level 5 evacuation order following Typhoon Hagibis, and World Rugby and the Japan 2019 Organising Committee cancelled Canada’s game due to safety reasons.

World Rugby stated that Kamaishi is situated in a highly mountainous area, including mountains directly behind the main stand of the rugby stadium.

Last week, a Canadian rugby player made headlines after visiting the South African locker room to apologize for a red card.

Following the cancellation of their match in Kamaishi, @RugbyCanada players headed out to help with recovery efforts, showing the true values of the game.

Amazing scenes and brilliant to see from the team. #RWC2019 pic.twitter.com/jdXQlyD2ZM