The existing post office building will be retained, and in order to support the high costs associated with the transforming the structure for other uses additional density is required. But the site’s full potential is restricted by view cones, and the compact short, multi-tower built form is reflective of that.

Artistic rendering of the project. 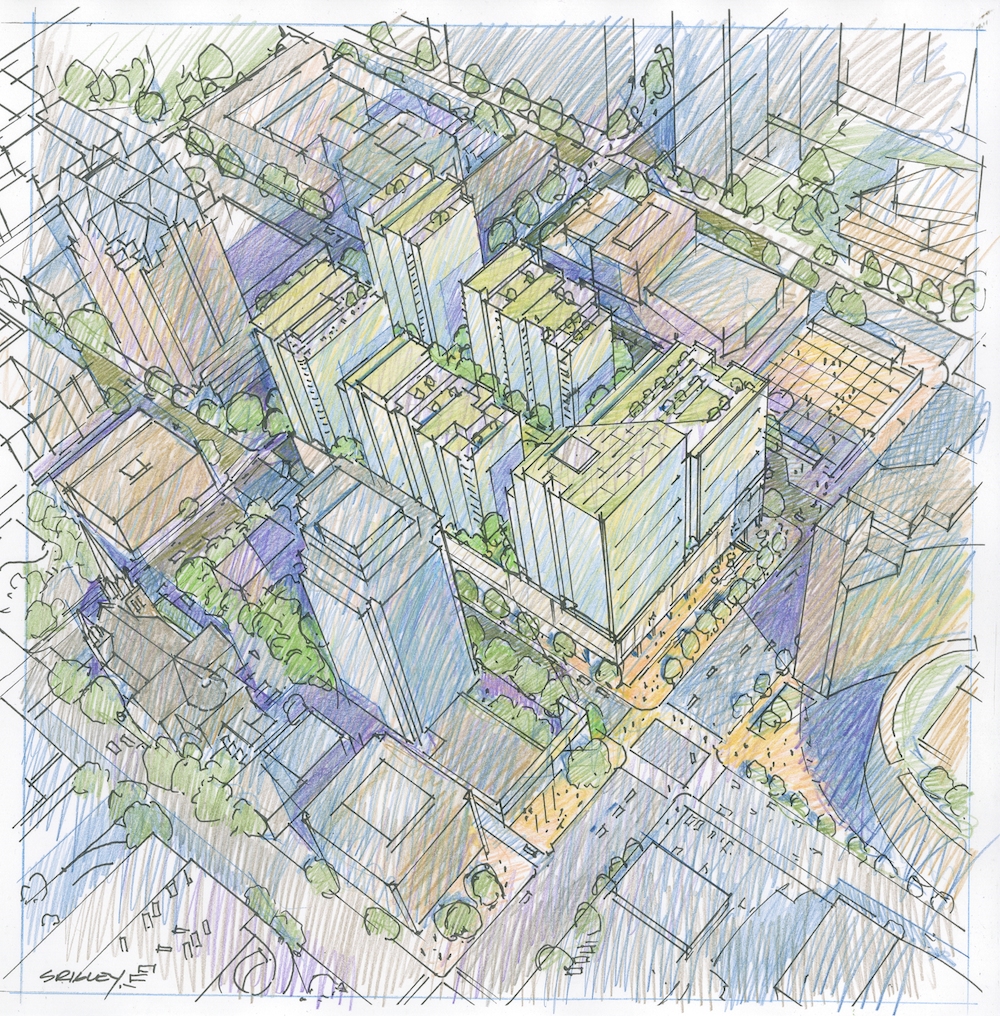 Preliminary plans by the developer consist of constructing five new towers up to 19 storeys high on top of the existing 686,000-square-foot building – effectively the redevelopment’s podium – framed by Dunsmuir Street to the north, West Georgia Street to the south, Homer Street to the west, and Hamilton Street to the southeast. The site is across the street from the Vancouver Public Library and Queen Elizabeth Theatre and within close proximity of Larwill Park, the future home of the Vancouver Art Gallery.

Altogether, about 900,000 square feet of floor area will be added to the building, which will give the overall project a floor area exceeding 1.5 million square feet.

The reconfigured podium will provide the downtown retail market with much-needed large-scale retail spaces suitable for larger retailers. Three large retail spaces, accessible using escalators from the retail concourse along Homer Street, are planned: a 27,200-square-foot space on the ground level, 75,000-square-feet space on the second floor, and a 102,000 square-foot space taking up the entire floor plate on the third level. 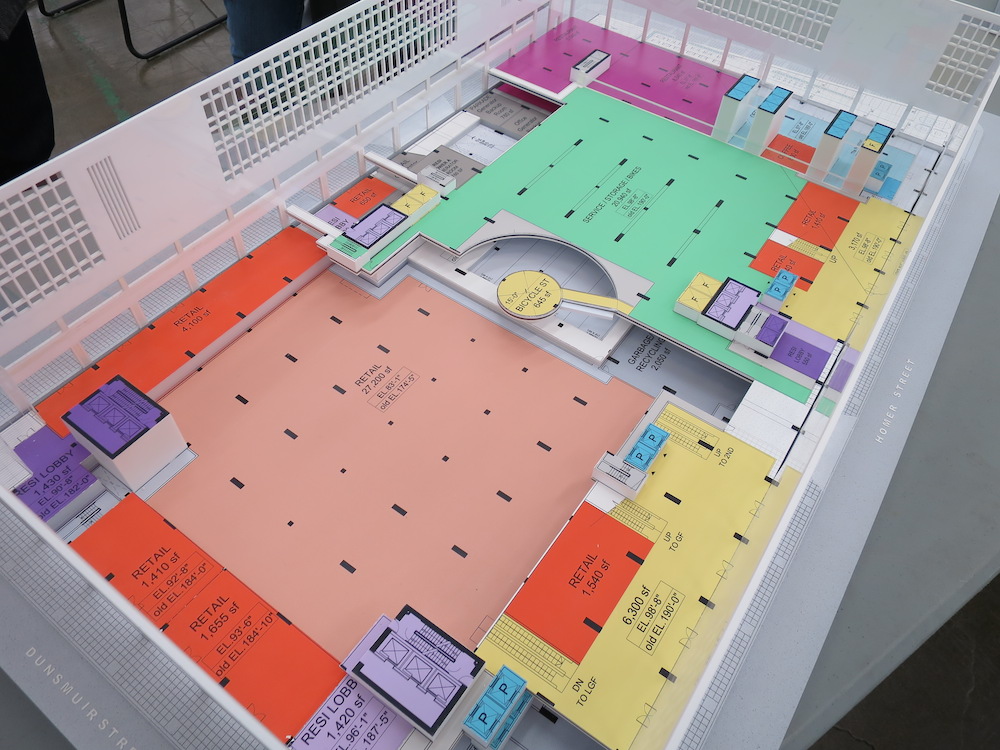 Such vast retail spaces could potentially be occupied by a grocery store and department stores such as Le Maison Simons and Saks Fifth Avenue. Both fashion retailers have expressed great interest in establishing a major presence in the downtown retail market, but suitable space has been difficult to come by. 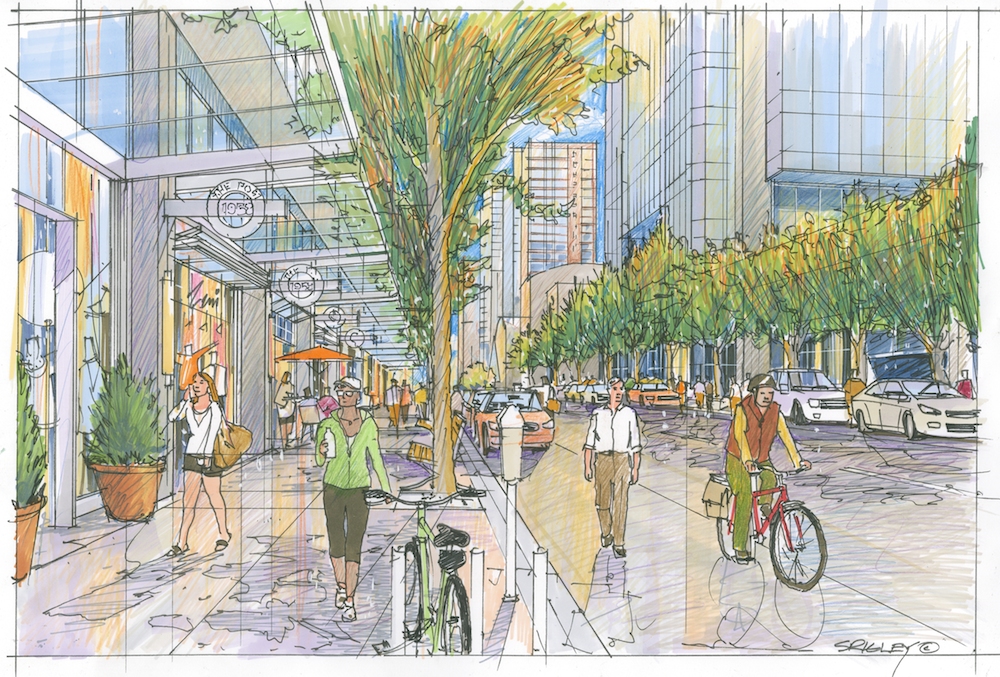 Small retail units, ranging between 650 square feet and 4,100 square feet, will have street storefronts punctured onto the building’s rose-coloured granite facades along all four sides of the structure to break open the fortress’ shell and connect it to the public realm.

“Right now, the building is for industrial use, but that’s not going to fit into downtown,” said Mark Whitehead, architect and partner at MCM, during a media tour of the post office building. “I think it’s one of the reasons this area is so breadth of people. The first thing we want to do is amend the urban fabric by introducing light and connectivity at the ground level.”

Two restaurant spaces are slated for the building’s ground floor corner space at the intersection of Homer and West Georgia streets.

Street view of the corner of Hamilton and West Georgia streets. 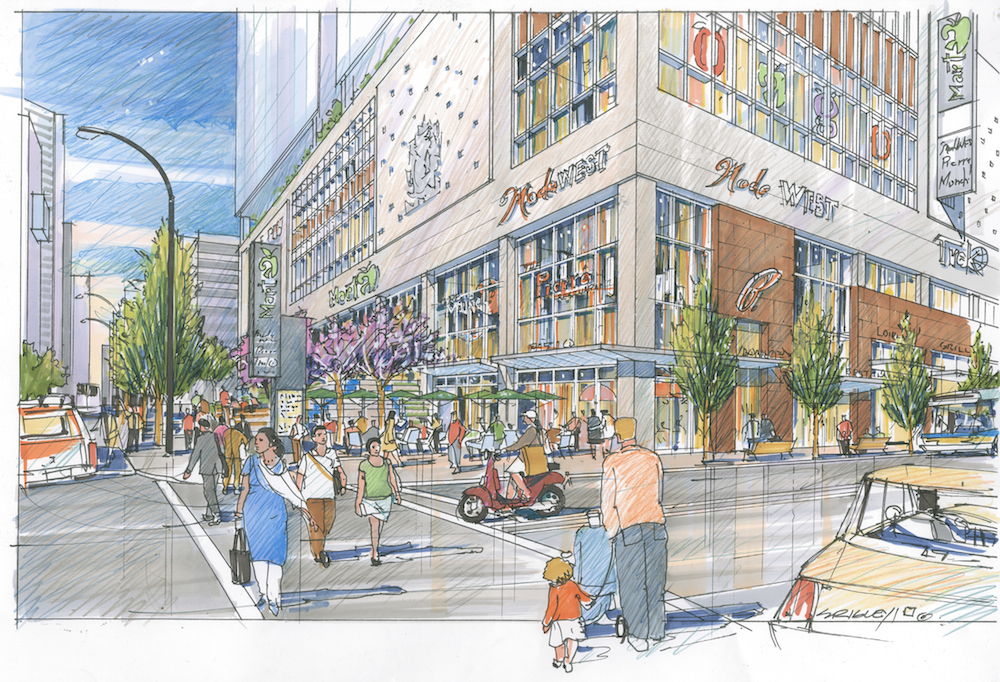 The rooftop of the building will be converted into a large courtyard and green space that residents will have access to.

Vehicle access to the upper parking levels, sitting atop the retail levels, will be through a new up-spiral access ramp cut into each level at the very centre of the building. 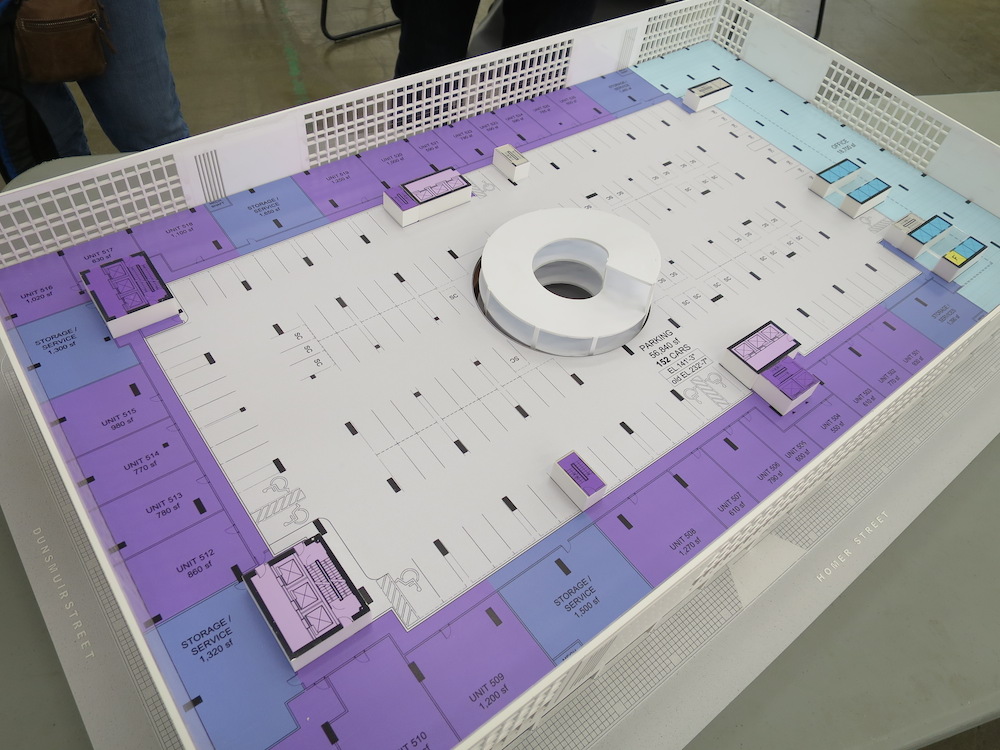 Parking spaces will also be found within the completed redevelopment’s lower three levels. There are currently two lower levels, but the lowermost level will be excavated to create additional space for a third level of underground parking.

Normally, for a project of this size and density, four or five floors of underground space would be excavated to fulfill the building’s parking needs.

“The complexities behind this parking is representative of all the challenges we face in repurposing this building,” said Tony Astles, the Executive Vice-President of Bentall Kennedy. “Anything we put into this project, the present conditions requires parking… This will be parking even at a reduced level [below City mandated quotas].”

On the other hand, no shortage in bike parking spaces is expected as the plans consist of building a 1,000 secure bike parking facility. 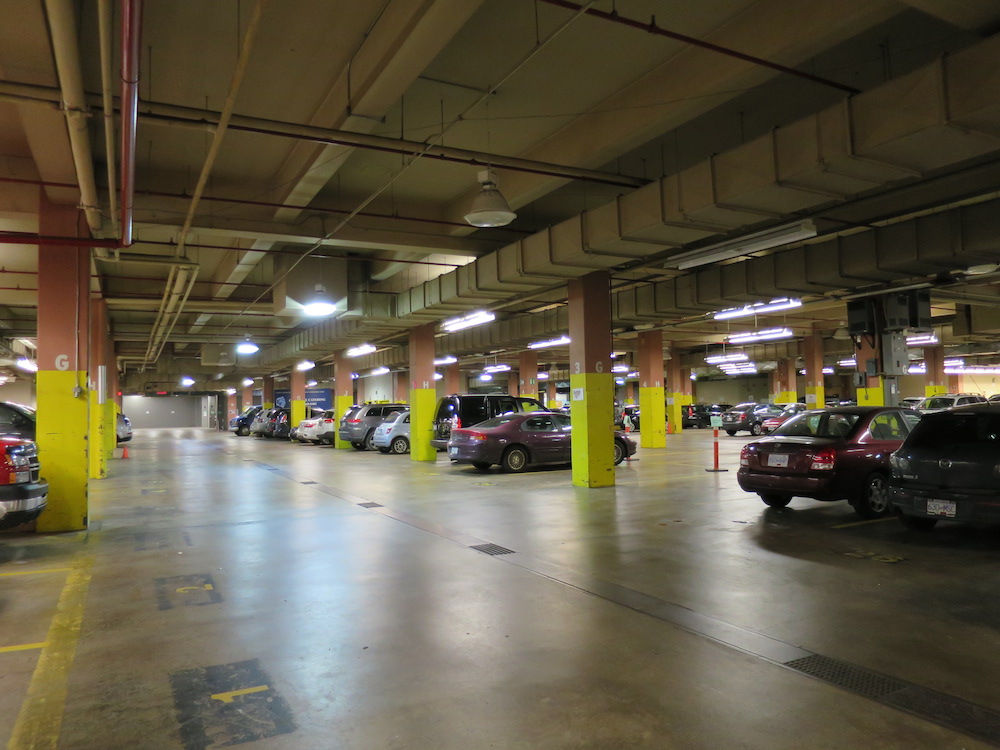 There are no plans to develop the existing ground level parking area that borders the building’s West Georgia Street facade into useable floor area. Instead, the space will be converted into a plaza with patio space and a street level entry into building’s retail. 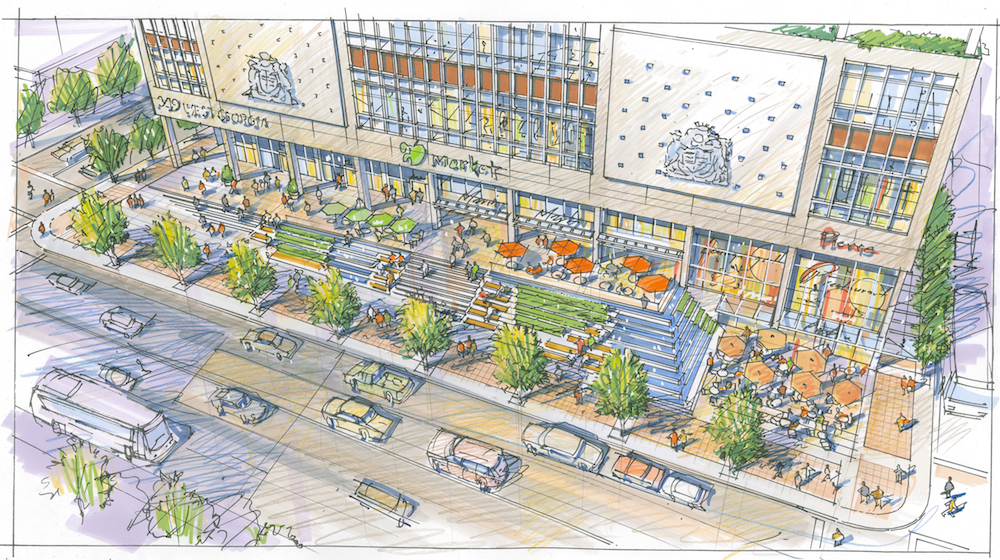 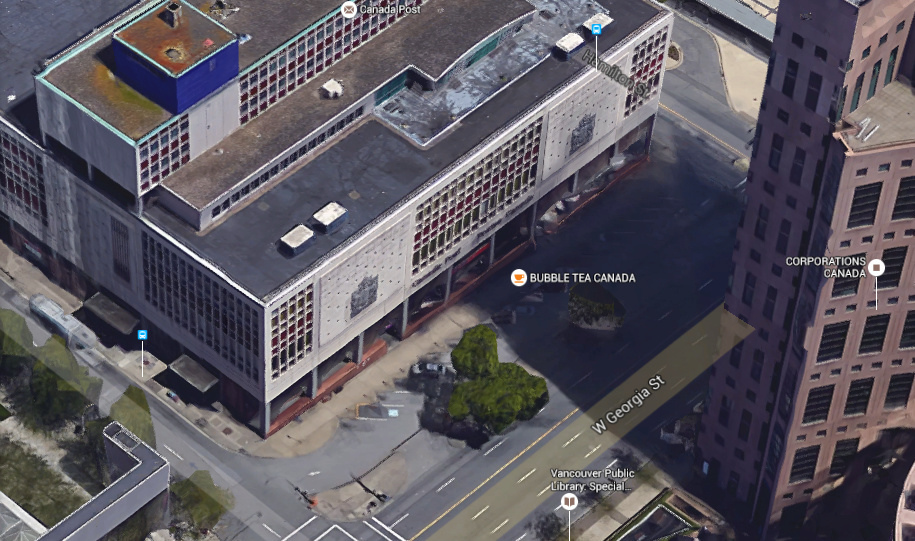 Although the building is being repurposed for new uses, most of the historical features and elements will be preserved and restored, which includes the entire facade and the two 19-foot-tall aluminum Canadian coats of arms perched high above the exterior on West Georgia Street.

“The City really considers this a heritage building, even though it is not registered or protected in anyway,” said Donald Luxton, the project’s heritage consultant and the former president of Heritage Vancouver. “So the proposal is moving in this direction, to hopefully secure it as a heritage site.”

Project proponents considered options other than retaining the post office building structure. One option would demolish the entire city block structure to enable a completely new purpose-built redevelopment while the other option – a hybrid heritage retention plan – would retain the historic West Georgia Street facade and demolish the northernmost two-thirds of the structure, but these options were not economically nor environmentally feasible.

It is estimated that the option of saving the post office building will reduce the need to create 50,000 cubic feet of demolition waste, which would require 7,000 truck trips to transport.

“If we started with a greenfield site, in theory we can dig as deep as we want to accommodate parking whereas in this [existing] structure we need to find creative and very complicated ways to introduce interstitial floors, between floors, to accommodate additional parking,” said Astles. “The greenfield site became more practical and economic than retention of the existing building.”

“Having said that, we were determined to try to make this heritage retention work, and with luck we’ll be able to do so… and that will be our proposal if we can work with all the constituencies to make it happen.” 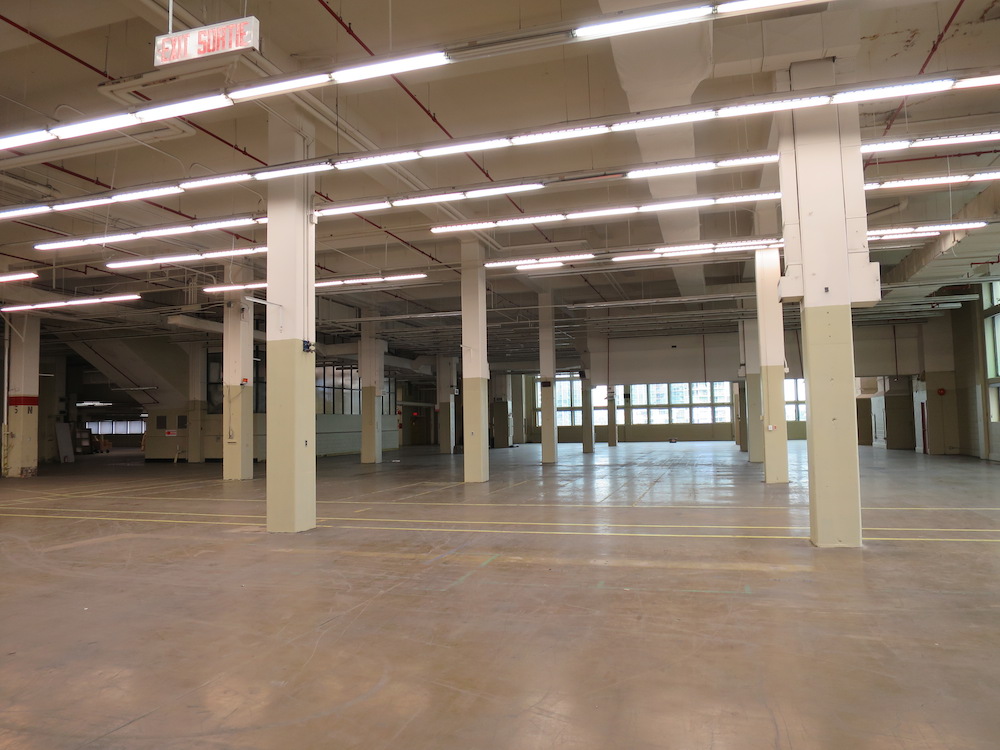 Some structural changes to the building, such as the reinforcement of support columns, will be necessary to support new parking levels and the towers that emerge from the existing rooftop.

“Demolishing and starting from scratch is much easier to do,” said Mark Thompson, another architect and partner at MCM. “What we’ve discovered in analyzing the building [is] that the heritage value of the building is in the whole structure, the fact that this is such a large, robust, intact, and monolithic building. That’s really where the value is in terms of its heritage value… That’s our starting point and our proposal to the city, and it’s harder to do that.”

Most redevelopment projects in Vancouver that incorporate an existing structure of heritage significance usually only retain the facade while most or all of the innards, the floor plates, are gutted for a new-build. Some examples of this rehabilitation and redevelopment method include Woodward’s, 720 Robson Street (Old Navy), 610 Granville Street (The Hudson/Steve Nash Downtown Sports Club), and 26 Southwest Marine Drive (Chrysler Building is now a Canadian Tire, Best Buy, and Sport Chek).

Despite the complex nature of the post office redevelopment project, environmental sustainability is still a key aspect for the project and a LEED Gold environmental certification will be pursued.

When complete, the yet-to-be-named project will create working spaces for 4,000 people and living spaces for another 4,000. Construction could begin before the end of the decade, and until then the building will be leased for film production purposes.

Canada Post has vacated the building for nearly two years. In 2014, the crown corporation moved its West Coast sorting facilities from the old downtown building into a new $200-million, 700,000-square-foot state-of-the-art complex at Vancouver International Airport.

Just eight years earlier in 2008, the federal government decided to sell the building to B.C. Investment Management Corporation for $130 million.

Model of the redevelopment project. 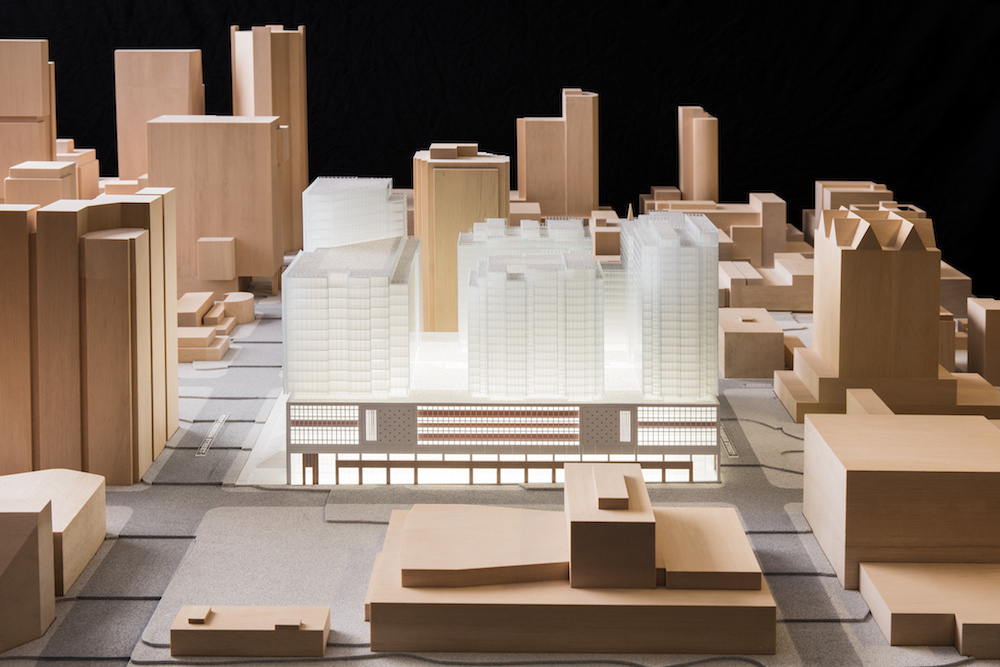 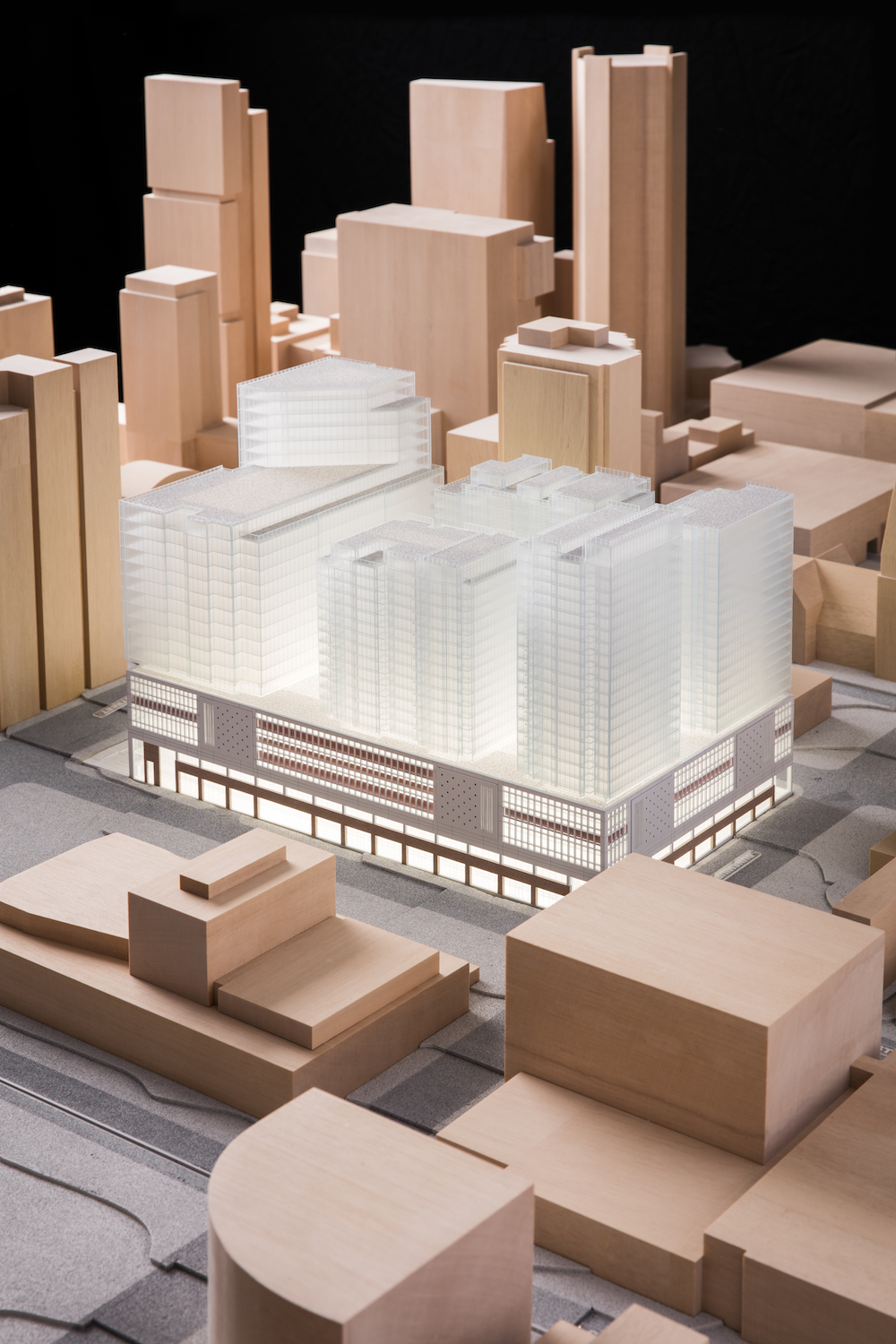 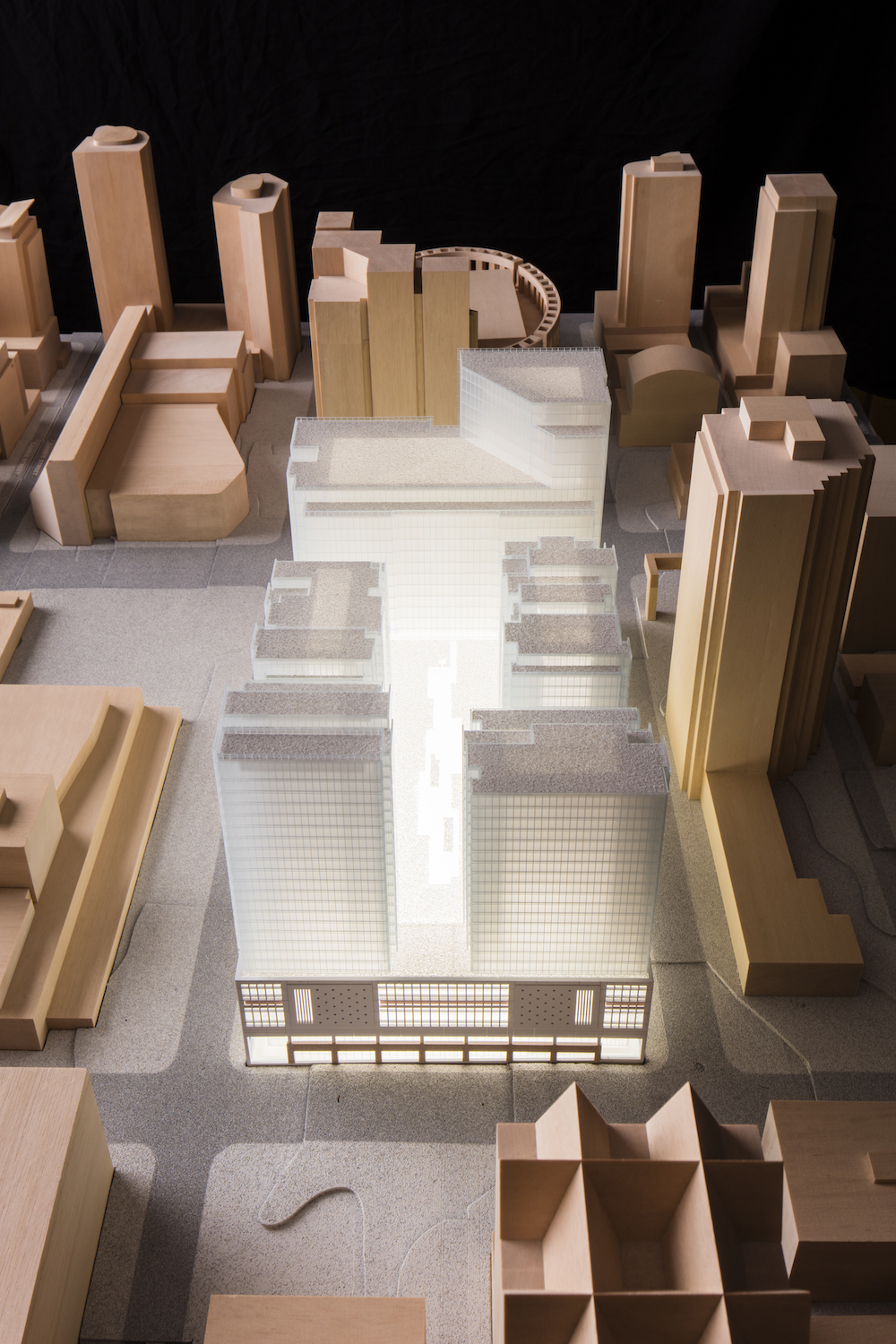 Diagram model of the first floor of showing retail (light orange and orange). 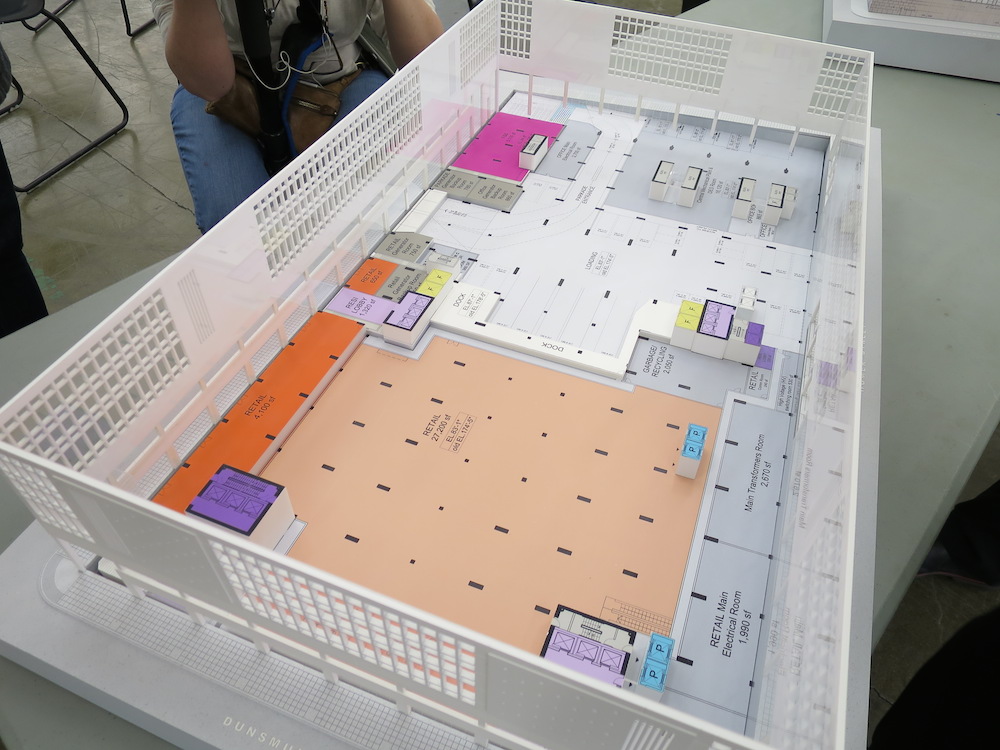 Diagram model of the third floor showing retail (orange) and a high ceiling for the second floor’s retail concourse (yellow). 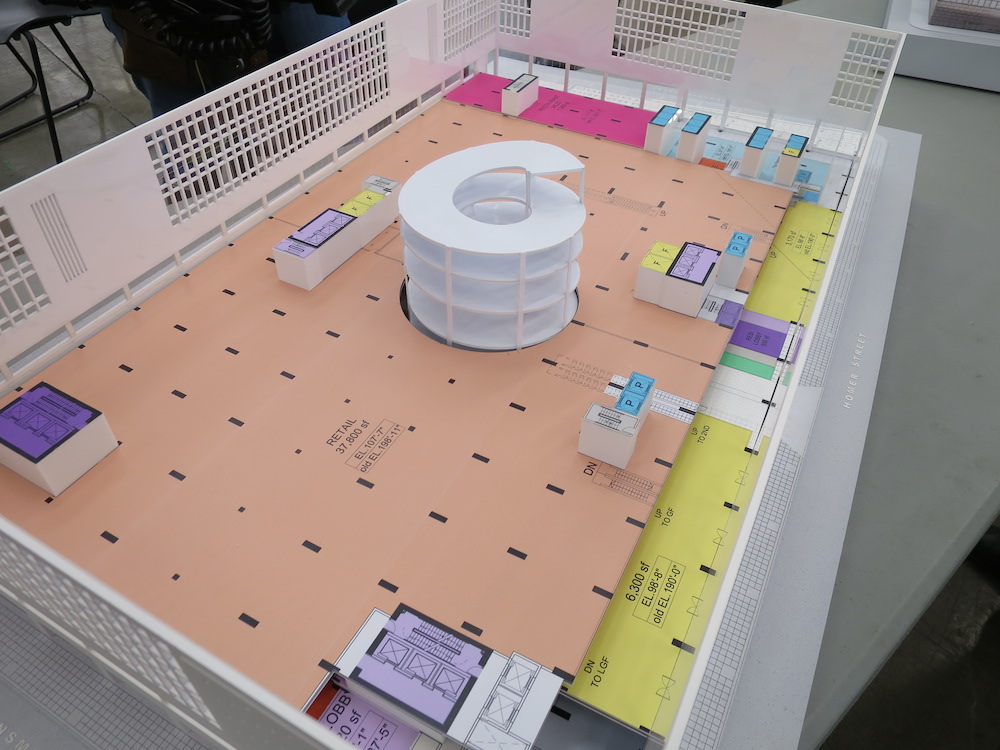 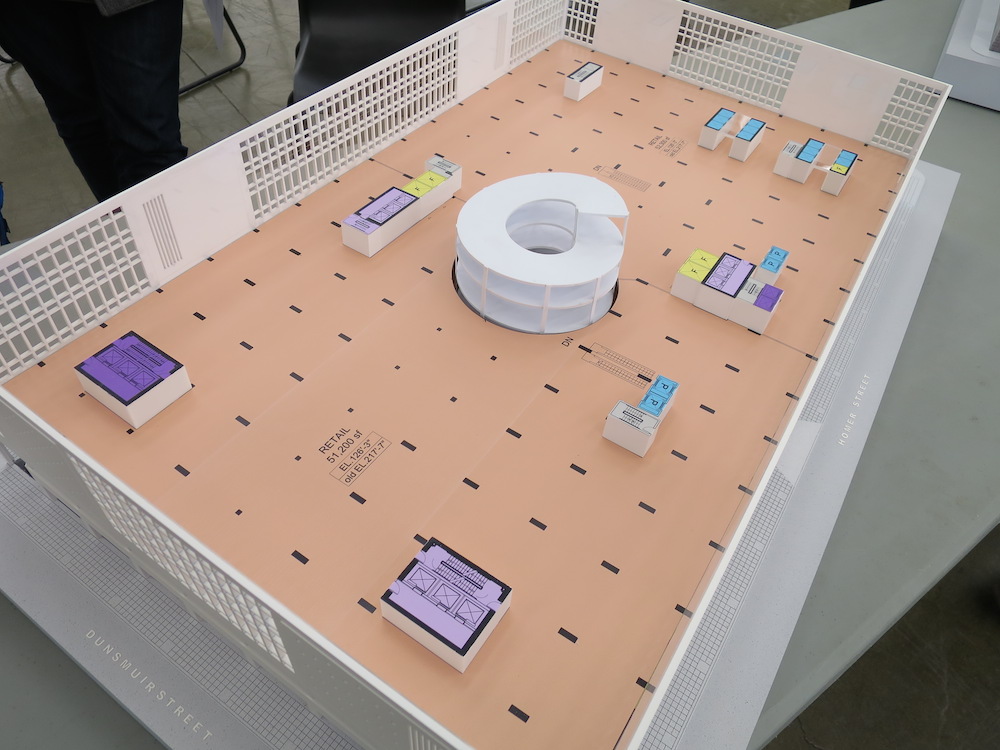 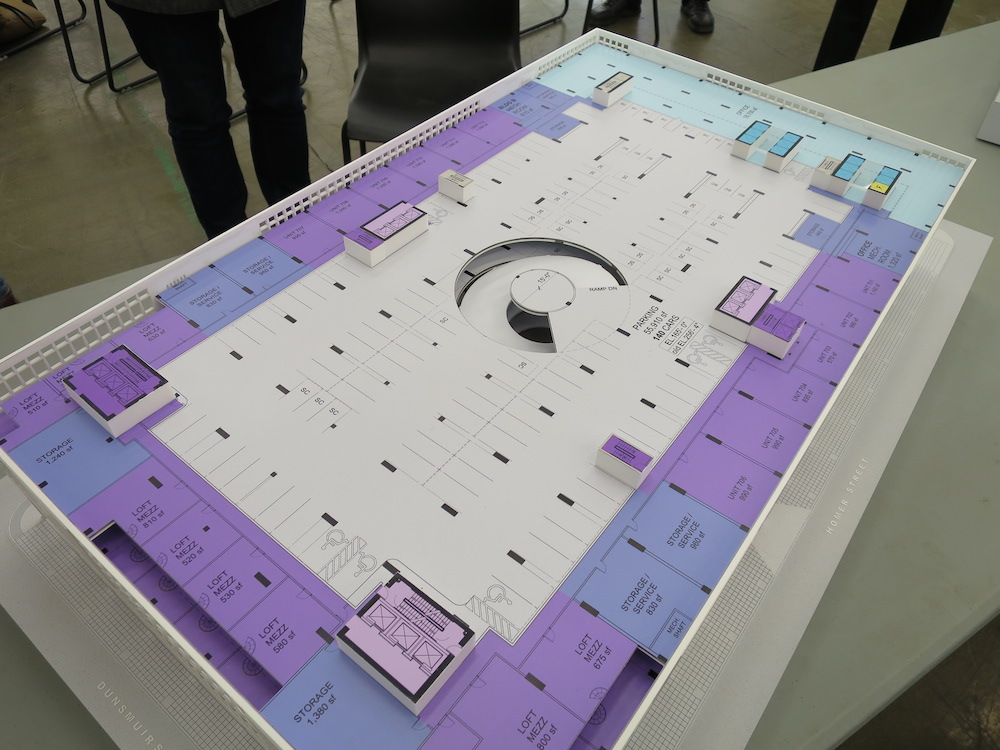