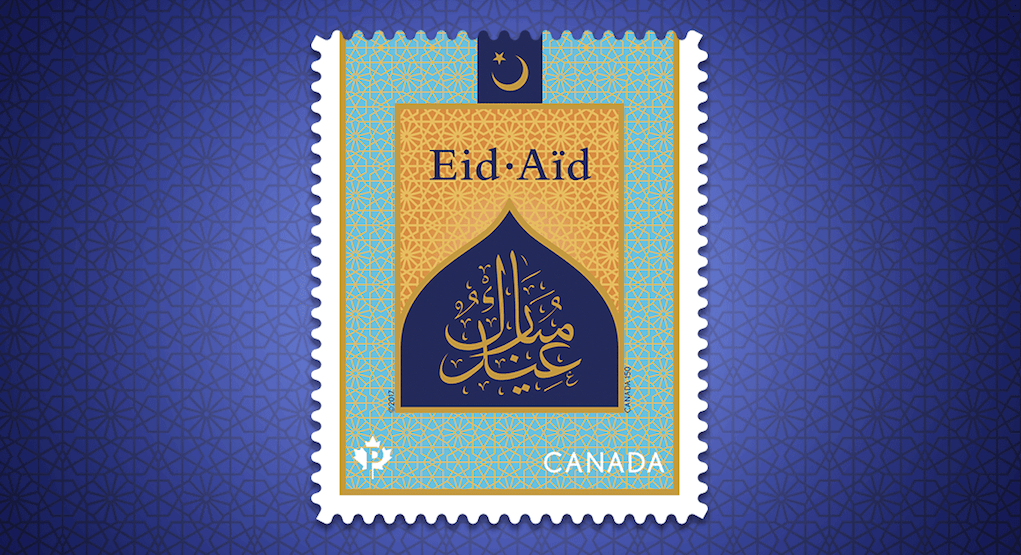 Canada Post has issued an Eid stamp celebrating Muslims in Canada and worldwide.

The new Canadian stamp recognizes Eid al-Fitr and Eid al-Adha, two of the most important festivals in the Islamic calendar. The stamp is being issued a month ahead of this year’s Eid al-Fitr.

Eid al-Fitr marks the end of Ramadan, the month in which Muslims fast from dawn until dusk – one of the most distinctive practices of Islam. Eid al-Fitr, or the Festival of the Breaking of the Fast, falls on the first day of the tenth month of the Islamic calendar, Shawwal (around June 26, 2017, in Canada).

With Eid al-Adha, or the Festival of Sacrifice, Muslims commemorate Abraham’s willingness to sacrifice his son as an act of obedience to God. The festival also marks the end of the annual Hajj pilgrimage to the Kaaba in Mecca, Saudi Arabia, the holiest site in Islam. It falls on the tenth day of the twelfth month of the Islamic calendar, Dhul Hijjah (around September 2, 2017, depending on when the new moon is seen). Celebrations include gift-giving and acts of charity. 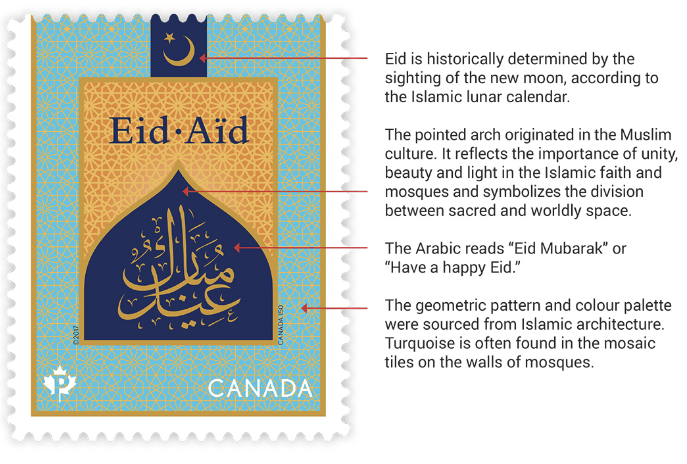 According to Canada Post, the Arabic script on the stamp reads “Eid Mubarak,” which translates to “Have a happy Eid” or “Have a blessed Eid.” The stamp’s deep blues and warm gold and yellows, as well as its geometric pattern, are seen in Islamic architecture. The new moon atop the stamp signifies the start of Eid.

Historically, Canada Post has issued annual Christmas stamps since 1964. And earlier this year, Canada Post and India Post agreed on a historic joint stamp issue featuring two stamps marking Diwali, the Hindu festival of lights. Canada Post had also announced earlier that it will issue a Hanukkah stamp this year, recognizing the Jewish faith’s eight-day celebration in December, which commemorates the rededication of the Temple in Jerusalem in the second century B.C.E.

The Eid, Diwali, Christmas, and Hanukkah stamps depict the pride in Canada being a land of diverse faiths, customs and celebrations, says Canada Post.