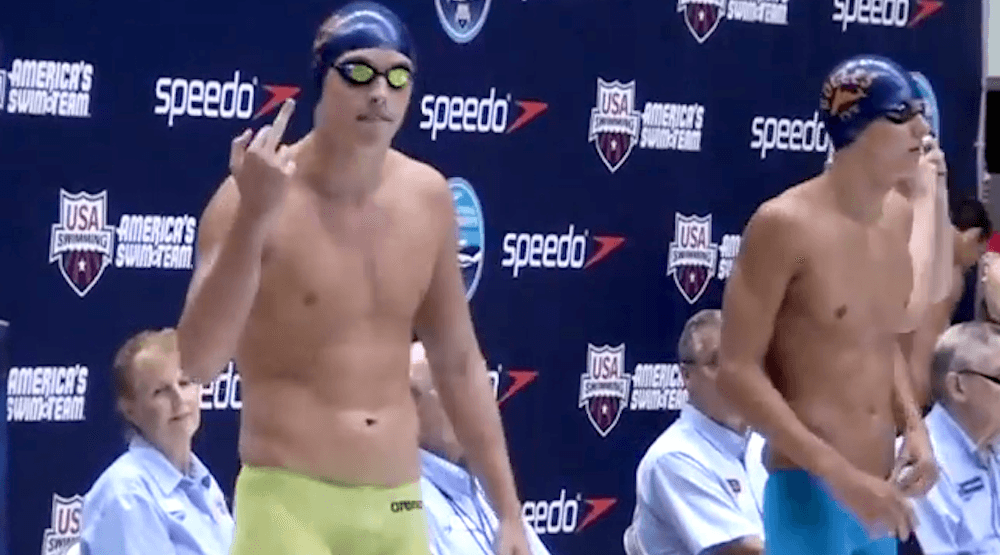 It’s the most unusual pre-race routine you’ve ever seen.

Canadian Olympic swimmer Santo Condorelli sticks up his middle finger in the direction of the crowd before every race. No, he’s not trying to disrespect anyone. He’s not even mad. He’s just keeping up a routine that he’s been doing ever since he was a kid.

Condorelli used to get intimidated in the starting blocks, often matching up against bigger, stronger competitors.

“I told him ‘enough is enough’,” his dad Joseph told Mitch Bowmile of SwimSwam.com in January. “When you get on the blocks, just put everything out of your mind and swim like there’s nobody near you. He said to me ‘how do you do that?’ and I said ‘well, you say **** it’. So he looked at me in the crowd, and we both gave each other the finger, and he started winning race after race and we never looked back.”

“My dad was like you know what? Give me the finger before every race,” Santo explained.

As you can imagine, this kind of ritual can sometimes get Santo into hot water, as it did at the 2012 Speedo Junior National Championships. That’s when an unfortunate camera angle caught the whole thing.

“I was unaware about TV broadcasting and all that, and my father was on the sidelines,” Santo told Bowmile. “We gave each other the finger and the camera happened to be pointing right at me at the time so it looked like I was giving the bird to national television and I got…. a stern talking to from one of my coaches. Another coach was super offended, thought I was targeting it towards their swimmer directly.”

Despite this, Condorelli isn’t about to stop using a working formula…

…Although he’s a little more discreet about it now. Instead of the raised bird, he kind of sneaks one in now, as he did at the Canadian trials this year.

Condorelli, who was born in Japan and grew up in Portland, races for Canada because his mom is from Kenora, Ontario. The 21-year-old will be competing in the 50 and 100-metre freestyle races, as well as the 4×100-metre relay. He’s got a shot at a medal, too, as he finished 4th in the 100-metre freestyle at last year’s World Championships, missing bronze by 0.07 seconds.

#Rio ya boy is here!