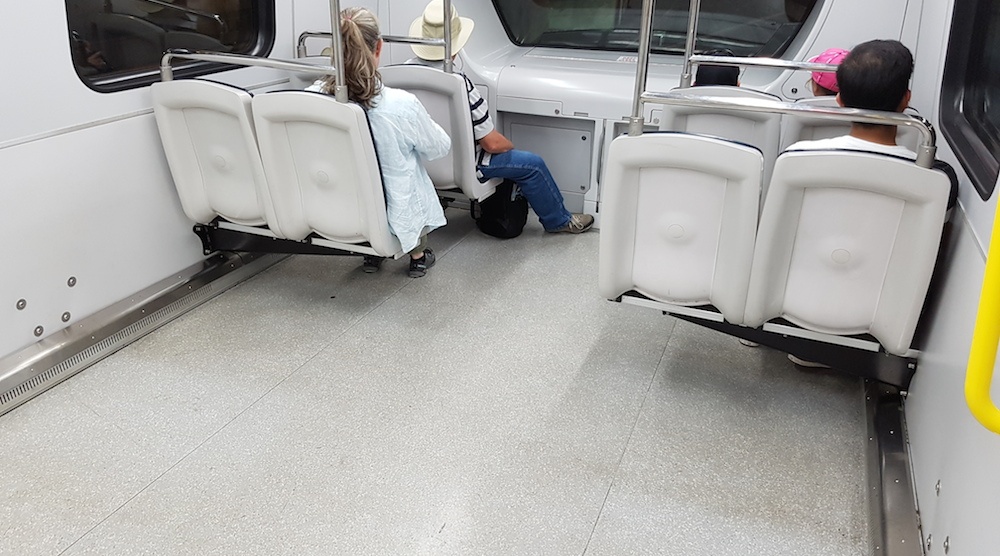 There is no question that the interior layout of the trains that run on SkyTrain’s Canada Line are far from ideal. In fact, the layout is terribly inefficient.

The current seating arrangement with row seating closely positioned by the doors encourages passengers to crowd around the doors. And when trains are full, door crowding becomes an obstruction for passengers boarding and disembarking at stations.

With growing ridership, and door crowding issues becoming much more apparent, TransLink and the Canada Line’s private operator ProTrans BC have engaged in a pilot project that involves reducing two-car train seating capacities by 10 seats or five per car. Currently, just two trains on the 20-train fleet have received the seating changes.

TransLink spokesperson Cheryl Ziola told Daily Hive that the pilot project began last Thursday and will run for six weeks. The effectiveness of the pilot project will be evaluated to determine whether the rest of the Canada Line fleet seating arrangements will also be modified.

“All of the removed seats are located immediately adjacent to each vehicle door,” she said. “There is no impact to accessible seating locations. Additional overhead hand rails and hand straps were installed where the seats have been removed.”

Currently, the carrying capacity of the two-car South Korean-built Rotem trains is 338 passengers, both sitting and standing. With seats eliminated to make way for more standing capacity, overall carrying capacity on the train will increase and passengers will be more likely to walk further into a train to stand in the middle of the car.

The Canada Line’s daily ridership on weekdays is over 120,000 passengers, and with its current fleet size it can move approximately 5,500 passengers per hour per direction (pphpd). With more trains and the insertion of a smaller third car into the existing two-car train sets, along with a platform length extension from 40 metres to 50 metres, the Canada Line’s system capacity could theoretically reach a maximum of 15,000 pphpd.

In June, the provincial and federal governments announced a plan to acquire 50 new SkyTrain cars over the next three years. The Canada Line would see an additional 22 new cars (11 two-car trains) at a cost of $88 million to increase the capacity by 55% while the Expo, Millennium, and future Evergreen lines would receive 28 additional Mark III cars (seven fully-articulated four-car trains) at a cost of $112 million.

Three years ago, TransLink began a $37.9-million project to refurbish the original 114 Mark I SkyTrain cars that run on the Expo and Millennium lines. The upgrades included new doors, upgrades to the electrical system, improvements to interior amenities, new exterior paint, and a modification to the seating configuration to improve capacity and passenger circulation. The refurbishment project is also intended to extend the lifespan of the old cars by another 15 years.

Two seats are removed next to this door on a Canada Line train. 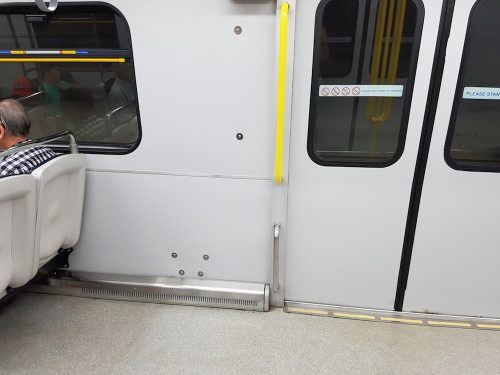 Four seats (the rear row) removed at the front of this Canada Line train. 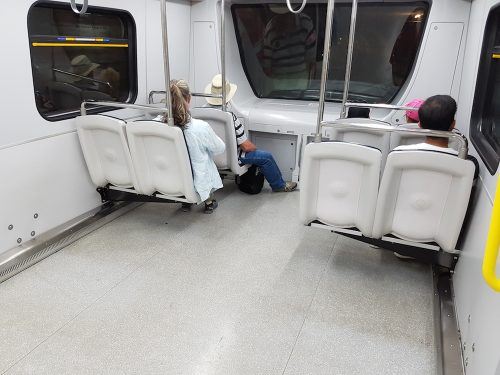