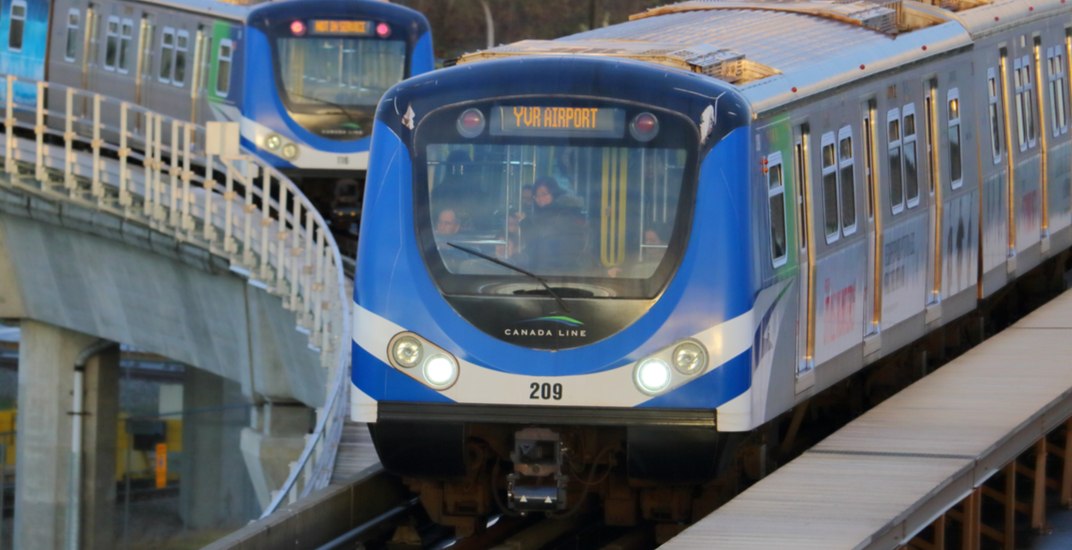 The single easiest way capacity can be increased on the SkyTrain Canada Line is through the acquisition of additional trains to provide a higher frequency.

But according to TransLink CEO Kevin Desmond during a press conference today announcing Canada Line peak hour service improvements through 12 new additional two-car trains, this 2009-opened SkyTrain system will approach its frequency limits during the busy peak rush once all of the newly acquired trains enter service.

“By the time all 12 trains are fully scheduled into service, we’re probably hitting the design capacity in terms of frequency of peak hour on the system,” said Desmond.

“This procurement and the deployment of the cars will probably max out the system. There is not much ability to put additional cars on the system.”

The Canada Line’s scheduled peak frequency last year on the main line between Waterfront and Bridgeport stations reached just over three minutes, and with further trains it can be increased to up to about every two minutes.

There are a number of limitations to how frequency can be increased on the Canada Line, with considerations such as the 650-metre-long, single-tracked sections at the terminuses ending at Vancouver International Airport and Richmond City Centre, including both terminus stations.

Another consideration is internal station capacity: the volume of passengers a station can safely handle from trains operating more frequently. This is why TransLink recently installed new additional escalators reaching the platforms of all three Canada Line stations downtown.

Besides frequency, the other option is to lengthen the trains, but this ability is highly constrained.

The Canada Line’s maximum platform length is 50 metres. Of the 16 stations on this SkyTrain line, a total of six stations — Waterfront, Vancouver City Centre, Yaletown-Roundhouse, Olympic Village, YVR Airport, and Richmond-Brighouse — are already built to the ultimate 50-metre standard.

The remaining 10 stations are only at 40 metres, which is one metre shorter than the length of the two-car trains. The underground stations already have their extra 10 metres concealed behind false walls, while the elevated and at-grade stations can be extended by additional structural decking.

It is unclear whether the future new additional Capstan Station in Richmond will be built to the 40-metre or ultimate 50-metre standard. Construction is expected to begin in about a year from now for an opening in mid-2022.

“The design of the system did design the stations so that they can be expanded relatively easily from an engineering standpoint, so the challenge is we’d have to expand the platforms of each of the stations and put in longer cars. That would have to be a future Mayors’ plan,” continued Desmond.

But the 50-metre standard will only allow for an additional car, bringing the maximum train length to three cars.

Due to guideway geometry (turns, dips, and grading) and the presence of critical infrastructure (such as tunnel ventilation fans just beyond each underground station), extending the platforms any longer than 50 metres would likely require an expensive rebuild of major sections of the system.

When the Canada Line maximizes its frequency and operates exclusively on a fleet of three-car trains, its ultimate capacity should theoretically be able to reach 15,000 pphpd — the same peak hour capacity currently used by the Expo Line, which uses 80-metre platforms and carries an ultimate capacity of 25,000 pphpd.

With that said, TransLink anticipates the arrival of the new fleet, bringing the total number of trains to 32 two-car trains (64 cars), will be sufficient to meet the peak demand “well into this decade.”

“We think in the near term, these additional 12 trains should meet the demand on the system over the next several years,” said Desmond.

But he also acknowledged that the Canada Line’s ridership has consistently exceeded projections, especially from the slew of dense development along Vancouver’s Cambie Corridor and Richmond City Centre’s No. 3 Road Corridor.

“There is going to be a lot more development, and that means a lot more people demanding the service. It is something we and our policymakers need to take a strong look at.”

Other factors that should be considered include the added ridership from Capstan Station and its catchment of over 6,000 homes, strong tourism, continued solid passenger growth at Vancouver International Airport and the Canada Place cruise ship terminal, and increased office employment in downtown Vancouver.

In particular, the expected 2025 opening of the Broadway Extension will turn Broadway-City Hall Station into a major regional hub overnight with the expected sheer volume of transfers between the Canada Line and Millennium Line, and the resulting overall ridership growth.

“As an outsider coming in, I think looking back at how the line was built, certainly there were funding issues at the time. In retrospect, 10 years later, it would be nicer if it were built for the long term in terms of the sizing of the stations,” he added.

As of 2019, the Canada Line saw 150,000 boardings on an average weekday. Ridership growth is also strong for the span serving Vancouver International Airport, with 21% of all air travellers using the Canada Line for their journey to or from YVR.