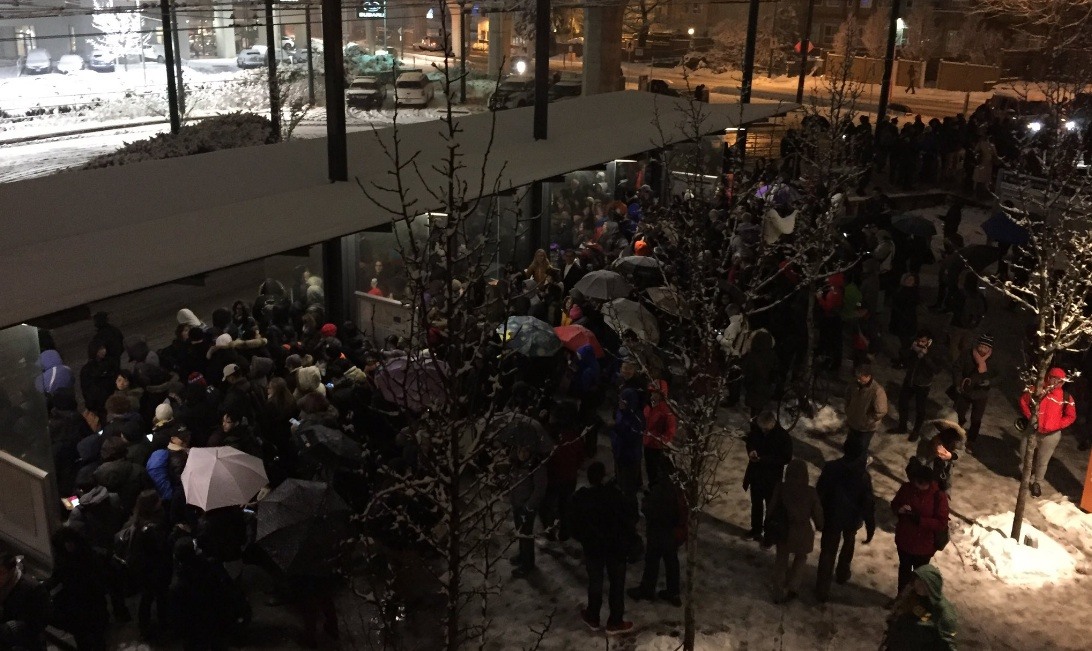 For the second time today, SkyTrain’s Canada Line is experiencing significant delays due to snow and ice-related issues on the North Arm Bridge tracks between Bridgeport Station and Marine Drive Station.

Issues began again this evening at approximately 6:30 pm, resorting the Canada Line’s private operator ProTrans BC to turn trains around; trains are only operating from Waterfront to Marine Drive stations and Bridgeport to YVR Airport and Richmond-Brighouse stations. This means there is no train service across the Fraser River from Vancouver to Richmond.

A bus bridge shuttle is operating between Marine Drive and Bridgeport stations, but passengers using this service should be aware that there are major crowds and wait times for the buses.

With many deciding to take public transit today because of the icy road conditions, and with a taxi shortage in the region, public transit is the only way for some to get home:

@TransLink what is happening with Canada line. I’ve waited for over two hours before work and now I am waiting again. It’s still not fixed

@TransLink people are waiting for hours to get bus due to Canada line closure!

It is not known when regular train service on the Canada Line will resume.

Trains on the Expo and Millennium lines are running normally and not affected, but there are larger passenger volumes due to snowfall. A number of bus routes across the region are also short turning or completely in-operational due to snow, including routes 95, 144 and 145.

During this morning’s rush hour, a similar disruption on the Canada Line beginning at about 9 am caused major delays and crowding at stations. Service did not begin to return to normal until after 11 am.

The Canada Line is owned by TransLink but operated and maintained by private company ProTrans BC, a division of SNC-Lavalin – the engineering company that designed and built the train system. The BC Rapid Transit Company, a division of TransLink, is responsible for the Expo and Millennium lines.

@TransLink how come Canada line can’t terminate at Bridgeport before turning back? Would save ppl a lot of headache. pic.twitter.com/YWRNkN6rXu

Commuter chaos at Marine Drive while the #canadaline remains inoperative from here to Bridgeport pic.twitter.com/yjhhoVJbHT

The sea of humanity waiting for a bus at Marine Drive with the #CanadaLine closure. Still no buses… #translink pic.twitter.com/9KUfwrXLnB

@TransLink One Canada Line attended in a crowd of 100s is not enough. I feel bad for the poor woman. Some crowd control would nice.