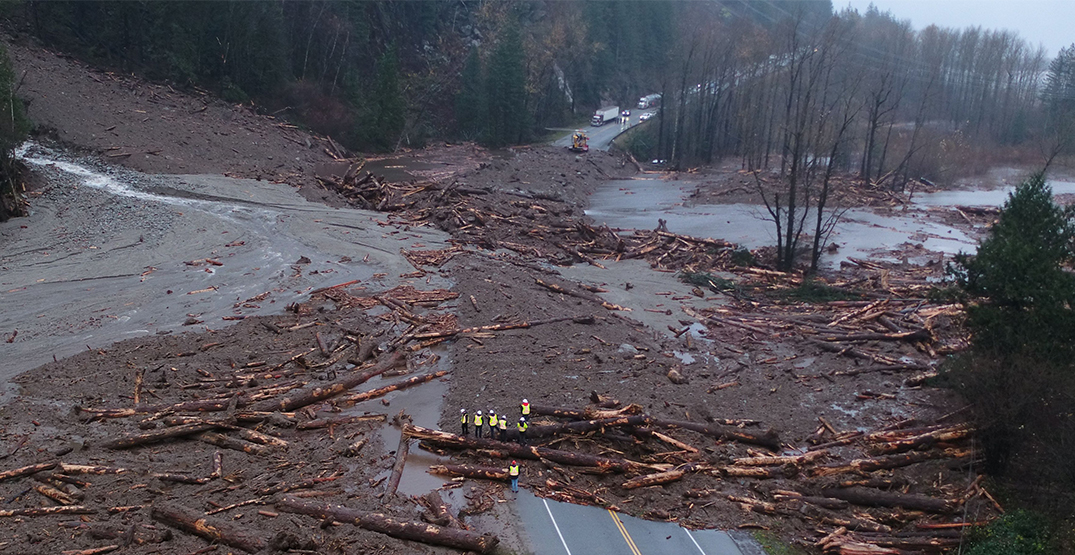 Drivers trapped on British Columbia’s flooded and washed out highways will have one more option for eventually getting home: driving through the US.

A spokesperson for the Canada Border Services Agency told Daily Hive Tuesday that travellers who transit through the States on their way home to their Canadian residence are exempt from a COVID-19 pre-arrival test and quarantine requirements.

This way, drivers who are stuck could travel down to the US border, enter Washington State, and re-enter Canada at a crossing closer to their home.

There is currently no highway open connecting BC’s Interior to the Lower Mainland. Entire sections of the Coquihalla and Trans-Canada highways were broken off and swept away by mudslides during the weekend’s record-breaking atmospheric river storm.

Views as crews work to assess the #BCstorm damage on our highways:
– Flooding on #BCHwy1 and No. 3 Road Overpass
– Crews survey the damage on #BCHwy7 at Ruby Creek
– Overflow in the Fraser Valley at Whatcom Road Interchange
– Work on #BCHwy1 at Patterson Creek pic.twitter.com/j4jdZFvIx1

Highway 99 is also closed south of Lillooet due to a landslide, and Highway 3 is closed as well, but officials say it could be the first to reopen.

Officials have asked British Columbians to stay put for now, given the treacherous situation on the roads. But when drivers can get moving again, they’ll be able to travel through the US without paying for a PCR COVID-19 test to return home.