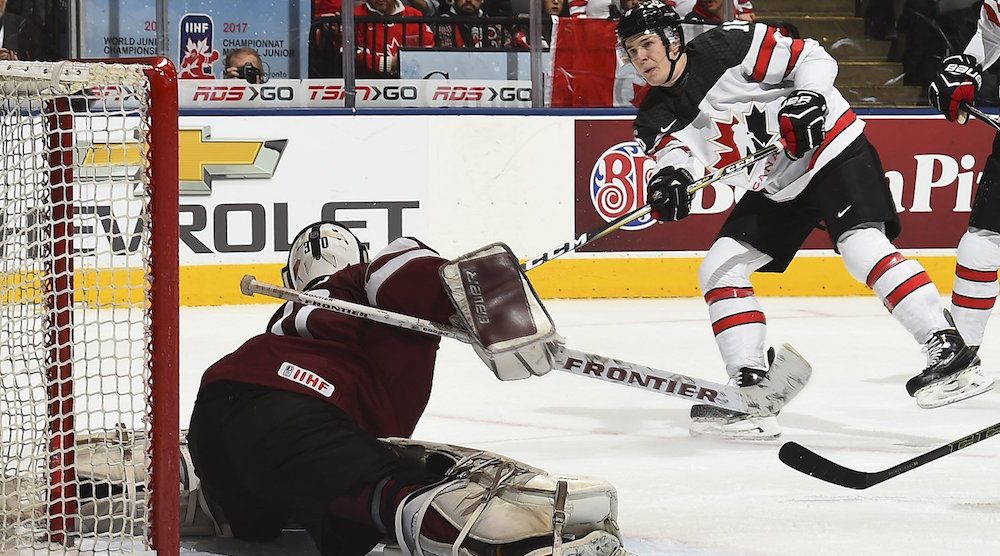 What were you expecting to happen? Canada has been dominating this tournament, and tonight they’re playing on home ice after a day off against Latvia? Come on, it’s just not fair.

I tried to go back through the World Juniors history to find the last time Canada played Latvia.

Definitely not outplayed, but credit Carter Hart for keeping Latvia off the board early on in this game. They actually outshot Canada 11-7 in the period, something that doesn’t happen often.

Canada outshot in a period for the first time in the 2017 #WorldJuniors. By 🇱🇻 Latvia!

Thanks to Hart, Canada escaped the first ten minutes unscathed before they eventually took over.

Barzal with a beauty

Despite Latvia holding the edge in shots on goal early, Canada continued their trend of scoring the first goal. It was a beauty from Matthew Barzal, with a nifty move on a shorthanded breakaway ten minutes into the game.

Team Canada was not very disciplined in this game, particularly in the first period. The first penalty killed much of the team’s early momentum, and made things much easier on Latvia than it needed to be. Canada took five penalties in the first period alone.

Latvia weren’t helping themselves out in the penalty department either, taking four penalties in the first 20 minutes.

Taking penalties against Canada is never a good game plan, and they ended up capitalizing on two of those power plays to take control of the game.

Nicolas Roy and Taylor Raddysh each scored with the man advantage, leading to a 3-0 lead for Canada despite being outshot in the period.

More goals from Canada in the second period, with Raddysh leading the charge.

He scored two goals in just over three minutes to complete the natural hat-trick just halfway through the game.

Both Raddysh’s goals in the second went five-hole, with the hat-trick goal coming on a nice deflection.

That goal made it 5-0, but Canada didn’t stop there, adding three more before the period ended on goals from Barzal, Anthony Cirelli, and Michael McLeod.

Latvia eventually did get on the board when Renars Krasternbergs beat Hart glove side to make it 8-1 after 40 minutes.

Raddysh apparently wasn’t satisfied with just three goals, and he picked up his fourth of the night a few minutes into the third on yet another deflection.

Raddysh was picked 58th overall in last year’s draft. He has 61 points in 28 OHL games this season and is continuing to shine here at the World Juniors. Something tells me some teams are kicking themselves for passing over this guy (twice).

Latvia got their second goal of the game from Martins Dzierkals, who made a nice move to the backhand while on a breakaway to beat Hart.

Canada would add one more before all was said and done en route to the 10-2 win.

After a rest day tomorrow, Team Canada is back in action on New Year’s Eve at 11:30 am PT in what should be an entertaining game against the United States.

WATCH the highlights in @HC_Men‘s 10-2 win over Latvia (@lhf_lv) to take the lead in the Toronto group at the #WorldJuniors. pic.twitter.com/gULRMcV3rt