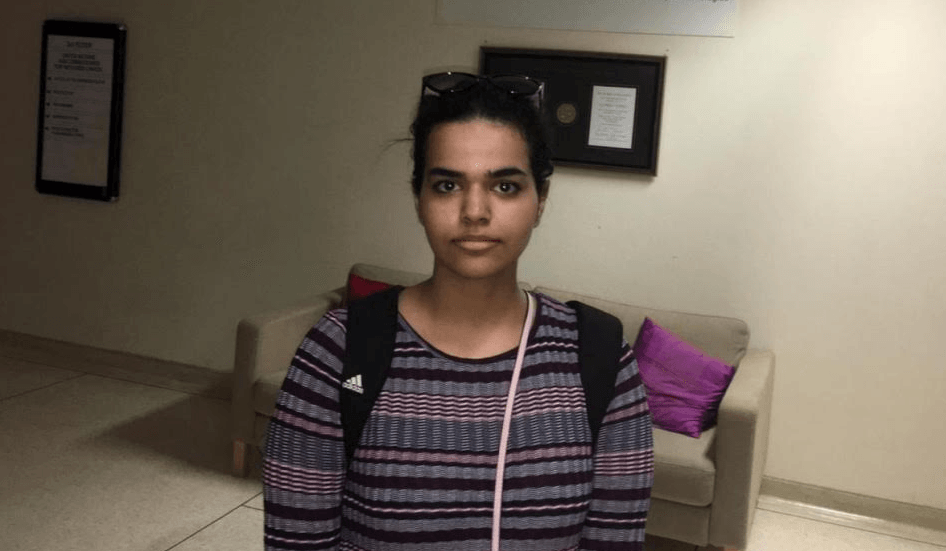 Rahaf Mohammed Al-qunun at the UN building in Bangkok, before departing to the airport / UNHCR

Canada has granted asylum to an 18-year-old Saudi teenager who was feeling abuse from her family in Kuwait.

Rahaf Mohammed al-Qunun was stopped at an airport in Bangkok by Thai immigration officials, who took away her passport.

She barricaded herself in an airport hotel room in an attempt to prevent being deported back to her family and began live-Tweeting her situation to the world.

18 year old Saudi woman Rahaf Mohammed Al-Qunun is being held at #Bangkok airport, her passport confiscated by #SaudiArabia which prevented her from continuing to #Australia. She wants to seek asylum, fears she will be killed if forced back to #Riyadh. Needs access to #UNHCR! pic.twitter.com/7yEGI1KKcb

The UNHCR granted al-Qunun legitimate refugee status and a number of countries — including Canada and Australia began talks to grant the teen asylum.

So it’s confirmed #UNHCR has determined #Rahaf is a refugee, & her case has been referred to #Australia for protection & resettlement. FM @MarisePayne due in #Bangkok tomorrow to talk about #Bahrain football player #HakeemalArabi – will she take #Rahaf back with her? #SaveRahaf pic.twitter.com/pNBvnMTP88

“Canada, as you know, has been closely following the situation with Ms.Rahaf al-Qunun. Our diplomats in Thailand have been engaged with our partners and allies — particularly with the United Nations High Commission for Refugees. The UNHCR has made a request of Canada that we accept Ms. al-Qunun as a refugee and we have accepted the UN’s request that we grant her asylum,” said Trudeau at a news conference in Saskatchewan.

“That is something that we are pleased to do because Canada is a country that understands how important it is to stand up for human rights, to stand up for women’s rights around the world and I can confirm that we have accepted the UN’s request.”

Robertson thanked Trudeau, the UNHCR, and Canada for helping with the case.

And away she goes. Safe & on her way to #Canada. Good luck, #Rahaf! While you may feel alone at first, as I told you before, you have more friends around the world than you know. Thank you, great appreciation to @JustinTrudeau @cafreeland @DonicaPottie & @Refugees @RefugeesChief pic.twitter.com/L5NQ7GJZsq

2…valuing the independence of youth to forge their own way, and demanding governments operate in the light & not darkness. It was a social media #WeToo movement. What the world needs is more of these types of positive movements in 2019, & into the future. #RahafSaved #SaveRahaf pic.twitter.com/GssqELbgDJ

Rahaf temporarily suspended her #Twitter account because she has been receiving some very nasty, very real death threats. Not sure when she will resume, & think it depends on what @Twitter @Jack does about tracking & shutting down those accounts making these threats! #SaveRahaf pic.twitter.com/YLoZ7Nzyc4

UNHCR says the teen is en route to Canada, and it is grateful for the government’s decision to provide international protection and a “long-term solution for her there as a resettled refugee.”

The agency credits the Canadian federal government for arranging her travel, and says her plight gives a glimpse into the precarious situation of millions of refugees worldwide.

“Refugee protection today is often under threat and cannot always be assured, but in this instance international refugee law and overriding values of humanity have prevailed,” UN High Commissioner for Refugees Filippo Grandi said in a statement.

There are currently 25.4 million refugees worldwide, says UNHCR, and only a fraction of those will be resettled.

“Ms. al-Qunun’s case was dealt with on a fast-track ‘emergency’ basis in light of the urgency of her situation,” said Grandi.