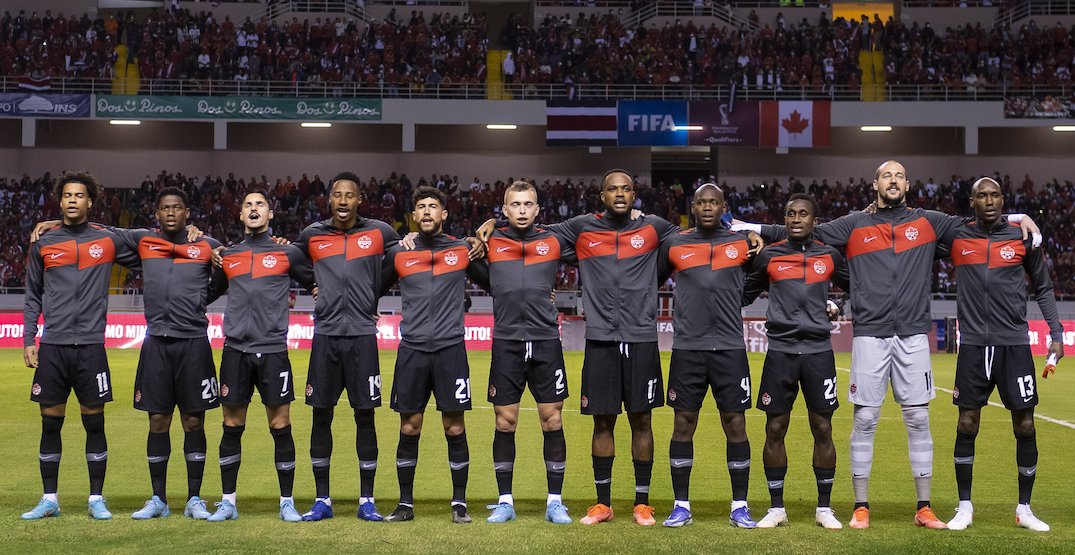 Canada will need to wait a little bit longer to officially book its ticket to the men’s FIFA World Cup, for the first time since 1986.

“It’s a tough loss tonight,” Canada’s head coach John Herdman said in a post-match interview with OneSoccer/Sportsnet. “We would have loved to put this team in Qatar, but we’ll save it. We’ll save it for when we get back to our hometown, and our own country.”

Canada’s next match is against Jamaica at BMO Field in Toronto on Sunday (4 pm ET/1 pm PT). A win or draw will clinch a spot in the FIFA World Cup for the Canadian men’s national team for the first time since 1986.

The turning point of the match in Costa Rica came when Mark-Anthony Kaye was sent off in the 34th minute, as he picked up a second yellow card. It forced Canada to play the remainder of the match shorthanded.

Kaye bumped into Johan Venegas, and the Costa Rican went down like he’d been shot. It was pure acting, yet Kaye should have still known better than to put himself in that situation. The Canadian midfielder was lucky to have not been sent off in the 15th minute, when he picked up his first yellow.

Costa Rica took the lead late in the first half on a header from Celso Borges.

Costa Rica go up 1-0 over #CanMNT at the stroke of half-time via Celso Borges' header off a set-piece play, not cleared#CanMNT | 🔴 https://t.co/7JFAUhgjL6 pic.twitter.com/PHqHwTv8X5

It was hard to tell who was playing with 10 men in the second half, as Canada dominated play, seemingly doing everything but score.

Tajon Buchanan put a header off the crossbar in the 74th minute, while Jonathan David hit the post in the 88th minute.

Tajon Buchanan NEARLY levels it for the #CanMNT vs Costa Rica, but the effort is agonizingly lost#CanMNT | 🔴 https://t.co/7JFAUhgjL6 pic.twitter.com/6oCmcccDIj

Jonathan David nearly equalizes for the #CanMNT, but has his effort smack against the bar 😭

While they’re disappointed to not book their ticket to Qatar tonight, Canada is still in great position to qualify for the World Cup. With seven wins, one loss, and four draws, Canada remains in first place — three points ahead of both USA and Mexico, and six points clear of Costa Rica.

The out-of-town scoreboard was kind, as Panama drew Honduras, meaning the Panamanians can no longer catch Canada. USA and Mexico also played to a draw, 0-0.

“We’re a brotherhood. We’ll live and learn. We got a little bit humbled tonight with the result. It’s what we needed. This is part of the learning process,” Herdman added.

“We’ll get back to Canada, we’ll regroup. We love our 30,000 [fans] egging us on, and with this talent, and the passion, and the desire after this match.