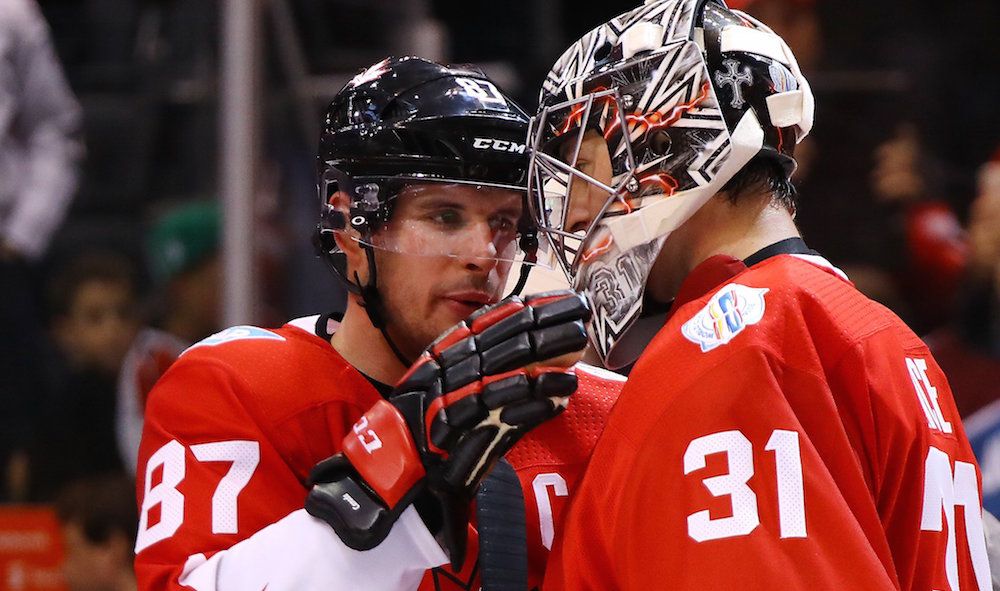 To the surprise of nobody, Canada beat Team Europe 3-1 on Tuesday night to take a 1-0 lead in the best-of-three World Cup of Hockey Final series.

As they’ve made a habit of doing in this tournament, Canada got on the board early when Brad Marchand converted a nice pass from Patrice Bergeron just 2:33 into the game. Steven Stamkos scored to make the score 2-0 and that’s the way things stayed until midway through the game when Tomas Tatar popped in a rebound to get Europe on the board.

Though the score was close for much of the game, you never got the sense that Canada was in trouble. Bergeron scored midway through the third period to make the score 3-1, but it might as well have been 7-1.

Canada’s too good. The game was in the bag.

The biggest story in this game to start off was the empty seats.

This is the World Cup with Canada playing at home in the biggest city in the country and the Air Canada Centre was littered with empty seats.

Were the ticket prices too high? Probably. Did the NHL miscalculate the appetite for this tournament? I’m guessing so.

Yes, the Blue Jays were playing down the road in a huge late-season game against the Baltimore Orioles. The Jays are such a big story in Toronto right now that a reporter asked Sidney Crosby earlier in the day if he would take in a baseball game on Wednesday.

Then he thought about it: “No.”

Despite what Gary Bettman might say, the World Cup of Hockey can’t be at the level that the NHL would like. But Rome wasn’t built in a day.

It won’t replace the Olympics, but there’s potential for this tournament to thrive. It just needs time.

One of the oddities of this tournament was that Stamkos still hadn’t scored a goal.

Steven Stamkos scores on his 26th shot for Team Canada in #WCH2016, including the three pre-tournament games. Curse is over.

He’s been getting a bushelful of chances, but has been unable to bury one, until now.

Zdeno Chara made an uncharacteristic giveaway in the neutral zone, giving the puck away to Ryan Getzlaf. Getzlaf froze Europe goalie Jaroslav Halak and threaded a beautiful pass to Stamkos to put in the empty net.

Chara gets his lunch stolen and Canada scores going the other way pic.twitter.com/x5qVMmmVfJ

“The amount of chances I’ve been getting in this tournament without getting one was a little frustrating,” Stamkos said. “But I knew if the chances kept coming that eventually they’re going to go in and it’s nice to get one in a game of this magnitude.”

Easy to say and believe that when you’re winning, I’d say. Can you imagine if it took him five games to score and the team was losing?

Canada’s top line is something to behold. This is the most impressive top line Team Canada has fielded, perhaps since Gretzky, Lemieux, and Hawerchuk at the 1987 Canada Cup.

That’s high praise, indeed, and I’m well aware that Crosby, Bergeron, and Marchand are not the best line Canada has ever had on paper.

But on the ice, they’re amazing. They were responsible for two goals tonight, both coming off great passes, from Crosby and Bergeron, respectively.

“It’s pretty impressive, at this level, to see the chemistry that they’ve had,” Stamkos said about his Team Canada teammates. “It’s fun to watch when they’re on your team.”

The line of Marchand, Crosby & Bergeron has tallied 37.9% of Canada's points at the #WCH2016 pic.twitter.com/IH5FKwMG4E

It feels like every game we’re all marvelling at the play of Sidney Crosby.

He has played great for Canada before, but not like this.

Once again, Crosby was named first star in this game, and it’s for good reason. He had two assists tonight, but it’s more than that. He’s noticeable all over the ice.

The way he protected the puck, shook off a defender with quick pivots and found Bergeron with a perfect pass to make the game 3-1 was outstanding.

If you doubted that he was the best player in the game before this tournament, he’s proving it now.

What’s up with Toronto booing Chara every time he touches the puck?

I hate the Boston Bruins as much (more) than the next guy, but how do you hate on Chara? After his brutal hit on Max Pacioretty a few years ago, I get booing him in Montreal, but what has he ever done to warrant this in Toronto?

Chara is a monster of a man, but generally he plays the game fairly. Ironically, he’d probably be an even better player if he had a little bit of Chris-Pronger-crazy in him. But he doesn’t.

If you only listened to the post-game media conferences from both coaches, you’d be hard-pressed to know which team won.

Here’s Ralph Krueger, the head coach of Team Europe, who lost this game:

“Very proud of how we came in and how we stuck into this game, and we made it a game where we can take confidence into the fact that we can win against Team Canada, but it has to be perfect.”

And here’s what the winning head coach, Mike Babcock had to say about his team:

“I didn’t think we moved the puck out of our zone at all tonight, went back and forth. We had guys out there that didn’t talk to one another so actually didn’t play fast and then turned the puck over on entry, so they looked quicker than they were and we probably looked slower than we were.”

Being upset with a win and making the other team happy with a loss… That’s when you know you’re good.

Is it really necessary to play another game after this? #WCH2016 🇨🇦