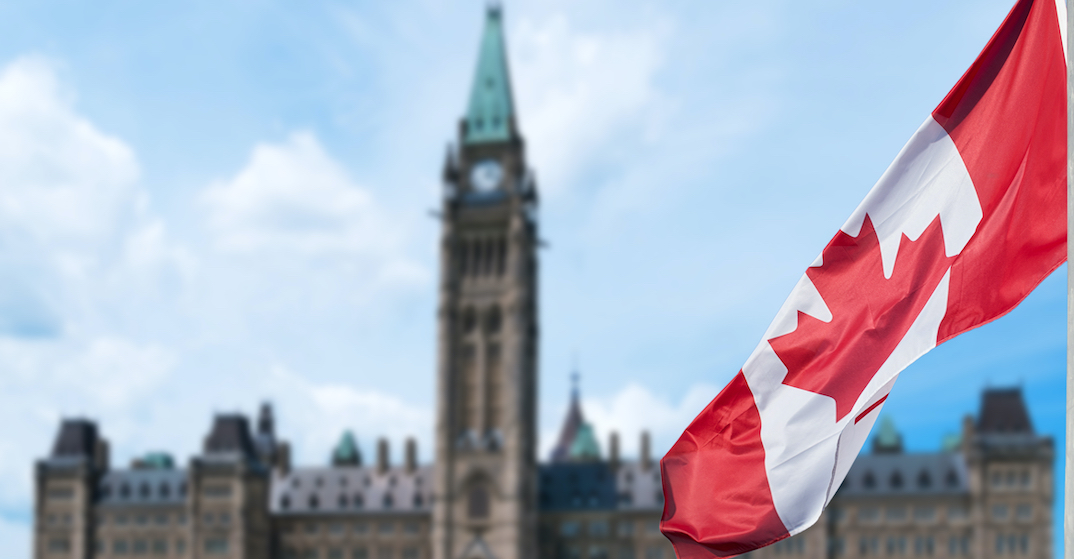 Canada has one of the world’s strongest democracies, according to an annual ranking.

The index provides a snapshot of the state of democracy around the world, across 165 independent states and two territories. “This covers almost the entire population of the world and the vast majority of the world’s states,” says the Democracy Index.

The Democracy Index is based on five categories: electoral process and pluralism, the functioning of government, political participation, political culture, and civil liberties.

Based on its scores on a range of indicators within these categories, each country is then itself classified as one of four types of regime.

The 2020 Index “represents a significant deterioration and came about largely — but not solely — because of government-imposed restrictions on individual freedoms and civil liberties that occurred across the globe in response to the coronavirus pandemic,” says the report. “The deterioration in the global score in 2020 was driven by a decline in the average regional score everywhere in the world, but by especially large falls in the “authoritarian regime” dominated regions.”

According to the report, “most people” concluded that preventing a catastrophic loss of life justified a temporary loss of freedom that’s been mandated by respective governments.  “Many critics of the lockdown approach accepted that some form of social distancing was necessary to contain the spread of the disease, but they failed to put forward convincing alternatives to the policy of enforced lockdowns, and the question of how many deaths would be acceptable as the price of freedom was one that few lockdown skeptics were prepared to answer.” 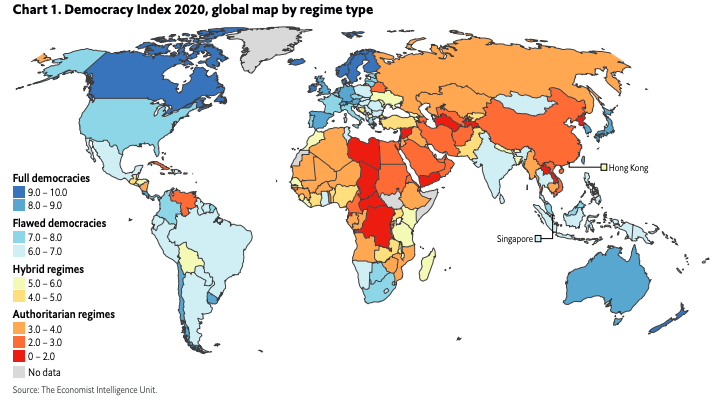 Using the five categories, countries were ranked overall, with 10.0 being the highest. Canada’s 9.24 overall score was good for fifth, wedged in between New Zealand (4th) and Finland (6th).

The report examined the United States democracy after what it called a “tumultuous year” dominated by the COVID-19 pandemic, the Black Lives Matter movement, and a fiercely contested presidential election.

As a result, the US retained its “flawed democracy” from last year. “Americans have become much more engaged in politics in recent years, and several factors fuelled the continuation of this trend in 2020, including the politicization of the coronavirus pandemic, movements to address police violence and racial injustice, and elections that attracted record voter turnout.”

The United States ranked 25th in the global democracy ranking. 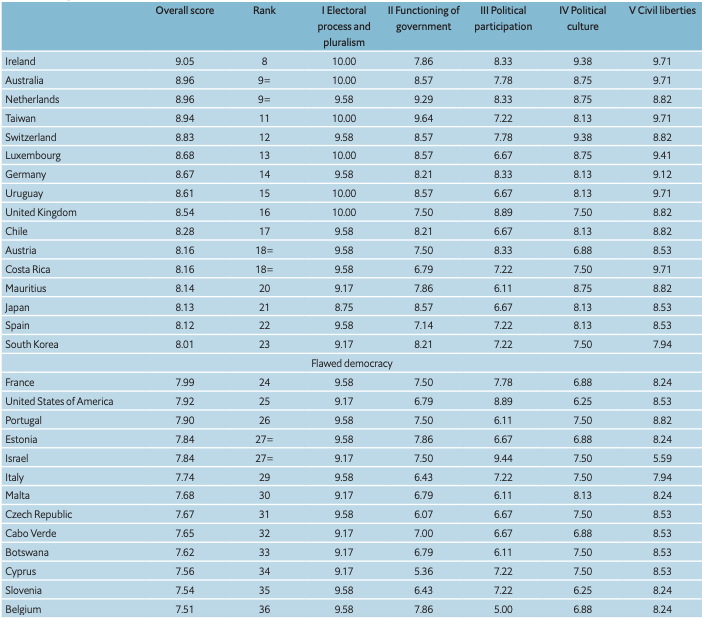 As has been the case since the first edition of the Democracy Index in 2006, Canada ranked as North America’s top democracy.

“Its average score improved modestly, from 9.22 in 2019 to 9.24 in 2020,” says The Economist. “There has been a reversal of fortunes in the region over the past five years, with Canada improving its standing and the US experiencing a decline.”