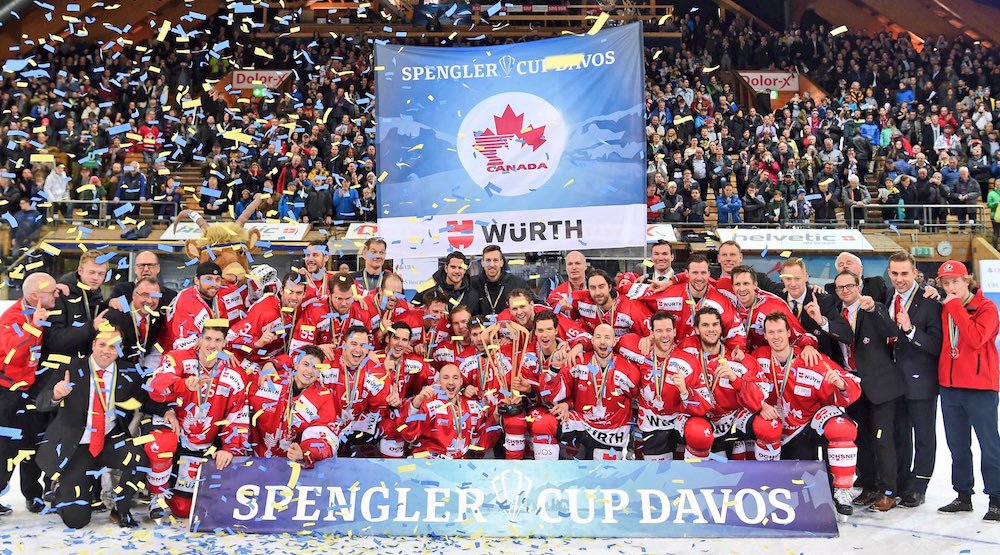 Team Canada has won the Spengler Cup for the second year in a row, defeating HC Lugano 5-2 in the Final on Saturday.

After falling behind 1-0 31 seconds into the game, Canada scored the next four goals from Chay Genoway, Marc-Antoine Pouliot, Cory Emmerton, and Andrew Ebbett. Canada carried a commanding 4-1 lead into the third period, and while Lugano was able to cut the lead to 4-2, Nick Spaling’s empty net goal with 17 seconds left iced it for the Canadians.

Goaltender Zach Fucale stopped 40 of 42 shots his way, for the win in the Canadian net.

The Final was comprised of many familiar names to NHL hockey fans, with the likes of Mason Raymond and Gregory Campbell playing for Canada, and Maxim Lapierre and James Wisniewski playing for Lugano.

The six-team tournament features Canada, host Davos, and four other European club teams. Canada lost their first game of the tournament, but ran the table after that, en route to the championship.

“Their character was tested, and they responded well all the way through,” said Team Canada head coach Luke Richardson. “We had a lot of hockey to play in a short period of time and I think you saw us get better every day. Every shift, really. It was really fun to watch this group play.”

The Spengler Cup, which takes place annually in Davos, Switzerland, is the oldest club hockey tournament in the world. The first tournament was held in 1923, on an outdoor rink, and didn’t move into an indoor facility until 1979. Canada began sending a team in 1984 and has won 14 titles, one fewer than host HC Davos, who hold the all-time record.

“I’m very happy I got to experience such an awesome event in Davos,” said Fucale. “We had a great group of guys that got better and better as the tournament went on. It’s a great honour to wear the Canadian jersey for everyone on this team. This was an amazing experience and a great win for us.”