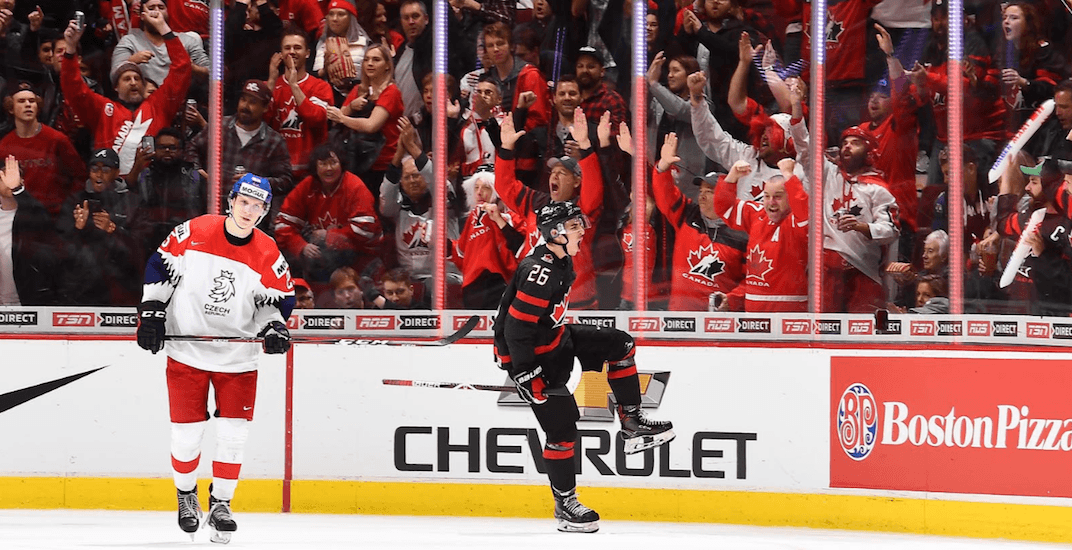 Yes, you could look at it as just another win for Team Canada, who’ve won their first three games at this year’s World Juniors.

But despite the lopsided 5-1 score over the Czech Republic, Saturday’s game was a hell of a lot of fun for everyone who came to watch at Rogers Arena.

There were tons of chances at both ends, it was physical, and at the end of it, the crowd stood to applaud their team’s effort.

There was even a stretch of play in the first period where it looked as if Canada was facing their toughest test of the tournament yet. Just 37 seconds after Canada’s Maxime Comtois opened the scoring, Ondrej Machala tied up the game at 1-1.

Maxime Comtois bounces the puck off a Czech defender to open up the scoring for #TeamCanada to get a 1-0 lead!#WorldJuniors #CZEvsCAN pic.twitter.com/aQv1D1Spt2

The score was still 1-1 when Martin Kaut laid Canadian defenceman Evan Bouchard into the boards with a questionable hit.

That hit earned Kaut a two-minute minor penalty and a 10-minute misconduct, and Canada’s Brett Leason scored the go-ahead goal on the power play.

Brett Leason (@PARaidersHockey) finds the back of the net for his first powerplay goal of the tournament to give #TeamCanada a 2-1 lead!@HC_WJC #WorldJuniors #CZEvsCAN pic.twitter.com/HPkRsQZ5Nt

After the game, Team Canada head coach Tim Hunter spoke about his team’s ability to play a physical game: “We have a big enough team to play physical against anybody,” said Hunter. “It’s not a concern.”

Goalie Mikey DiPietro, the Vancouver Canucks prospect who stopped 23 of 24 shots faced, talked about how the team is growing and feeling better together:

If we’re being honest, the Czechs weren’t too hard for Team Canada to beat. Canada was stronger on the puck and better positionally all game long. The Czech Republic did have their moments though, with a flurry of chances early in both the first and second periods.

Other notable performers on Saturday were Montreal Canadiens’ prospect Nick Suzuki, who created a few great scoring chances including this:

Nick Suzuki (@AttackOHL) connects with Morgan Frost (@OHLHoundPower) who finds the back of the net for his 4th goal of the tournament to give #TeamCanada a 5-1 lead! 🇨🇦@HC_WJC #WorldJuniors #CZEvsCAN pic.twitter.com/syTRnRsG9B

Alex Lafreniere, who found himself on the end of some criticism from Hunter after Canada’s last game, scored as well.

Hunter, on Lafreniere’s growth: “He’s played to his identity at times but not as consistent as we like. That’s typical, he’s only 17 and I understand all these things. I’m not looking for him to be perfect, but when he’s not perfect, he’s not going to play as much.”

Lastly, Jack Studnicka, who set up Lafreniere for that goal, also displayed man strength when he assisted MacKenzie Entwistle’s 4-1 marker.

Mackenzie Entwistle (@BulldogsOHL) finds the back of the net for his 3rd goal of the tournament to give #TeamCanada a 4-1 lead! 🇨🇦@HC_WJC #WorldJuniors #CZEvsCAN pic.twitter.com/Nov37aGkL8

Next up Canada will play against Russia on New Year’s Eve in a game that should decide first-place in Group A. Russia is 2-0 and plays Switzerland on Sunday.