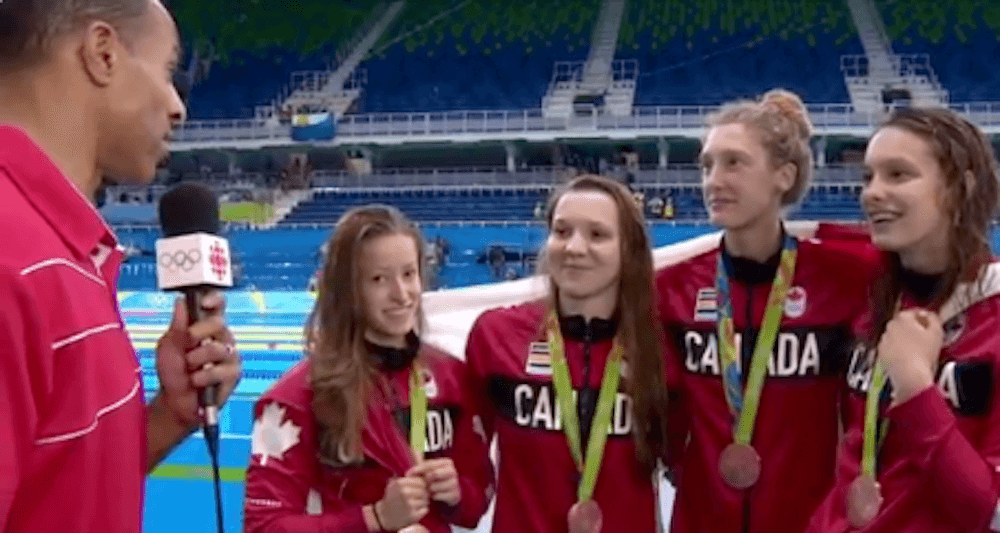 Canada watched the Rio 2016 Olympics in record numbers, with 32.1 million Canadians watching on CBC (English) and Radio-Canada (French). That’s a new record for a Summer Olympics.

“The best athletes from Canada and around the world inspired us day after day in Rio and it was our privilege to share these moments of triumph and heartbreak with so many Canadians,” said CBC Sports executive director Greg Stremlaw.

A number of factors contributed to improved numbers. These Olympics were always going to benefit from Rio’s time zone, which is just one hour ahead of the eastern time zone in North America. That meant that viewers were able to enjoy Olympics coverage without having to adjust their sleeping schedules. The last time we enjoyed a Summer Olympics in the Americas was 1996 in Atlanta.

Also the first time since Atlanta: Canada set a record for medals won at a non-boycotted Summer Olympics.

Canada’s performance certainly helped. They not only won medals, but they won medals early and often – nine consecutive days to start the Games.

It’s interesting to note that while CBC saw record numbers, NBC in the United States did not, blaming millennials for shortfalls. The Americans had an excellent Olympics too, winning more medals than they’ve ever won at a non-boycotted Games since 1904.

Unlike CBC, the time zone was largely inconsequential as NBC likes to package tape-delayed programming for its viewers. Maybe that’s something for them to think about next time that the Olympics are in a viewer-friendly time zone.

CBC, as is customary in this country, focused on live coverage. While some of the play-by-play could have been more well polished – some CBC broadcasters called the Games from a studio in Toronto, while other times they picked up an international feed for less popular sports – the coverage by hosts Ron MacLean, Scott Russell, David Amber, and Andi Petrillo was exceptional.

CBC’s main network Rio 2016 coverage was the top-ranked programming in morning, daytime, primetime and Pacific primetime among age 18-49 and 25-54 demographics.

Here are the most-watched moments each day: