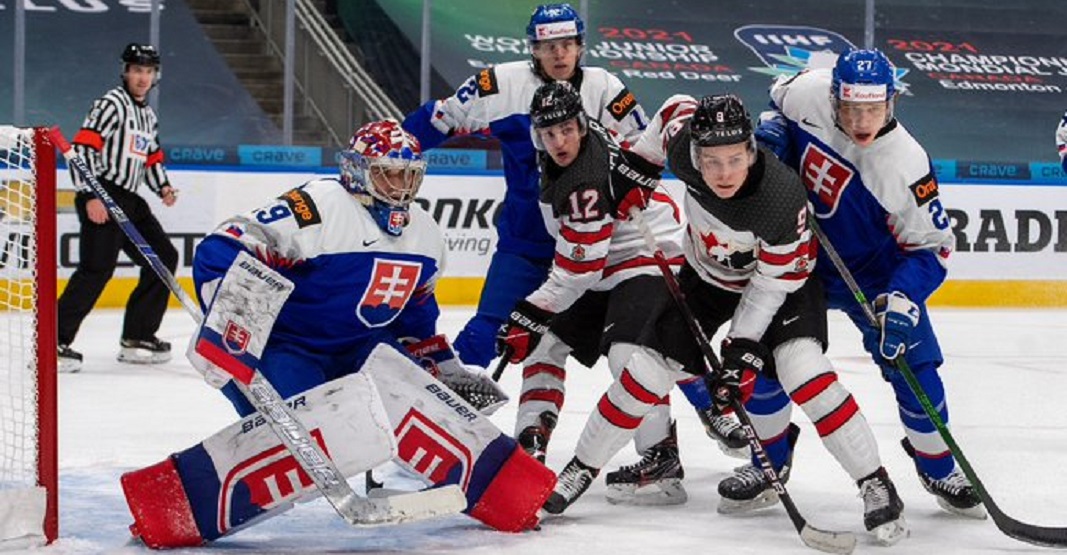 It wasn’t nearly as lopsided as their first game, but Canada beat Slovakia 3-1 on Sunday to improve to 2-0 at the 2021 World Juniors.

After a 16-goal performance on Boxing Day against Germany, Canada had a much tougher time generating offence on Sunday. Slovakia executed their game plan well, playing smart defensive hockey and taking away Canada’s time and space needed to create scoring chances.

Canada was able to get on the board early when Jordan Spence pinched in from the blue line and fired a loose puck past a sprawling Samuel Hlavaj.

Canada held the lead for all but five minutes in the game but just couldn’t seem to generate much offensively compared to their game against Germany.

The score stayed 1-0 until late in the third period where Canada finally added an insurance marker courtesy of Philip Tomasino.

Tomasino took a stretch pass from Dylan Cozens and made no mistake on the breakaway, snapping the puck over the glove on Hlavaj.

It was a good thing they got that insurance marker, because the Slovaks got on the board shortly after to break the shutout bid for Devon Levi and make it a one-goal game.

It's not over YET, Slovakia cuts the lead to 1 late in the 3rd! pic.twitter.com/8Fhh55iz30

The Slovaks had time to get an equalizer but Jack Quinn put the game away with an empty netter.

Levi had another steady performance in goal for Canada, making 17 saves to keep Canada ahead throughout the game. The 19-year-old was relatively unknown prior to this tournament as a 7th-round pick, but is making a bit of a name for himself with his simple-but-effective style in between the pipes.

Spence and Tomasino scored the pivotal goals for Canada, and both players were extra players when Canada faced off against Russia in the pre-tournament game. Tomasino first entered the lineup last game when Kirby Dach got injured, and he now has five points in two games. Spence was playing his first game of the tournament, drawing into the lineup while Braden Schneider served his one-game suspension.

With Schneider eligible to return to the lineup next game, it’ll be interesting to see what coach Andre Tourigny chooses to do.

Canada is next in action on Tuesday when they take on Switzerland at 6 pm ET/3 pm PT. After that, they’ll wrap up preliminary round play with a game against Finland on New Year’s Eve.