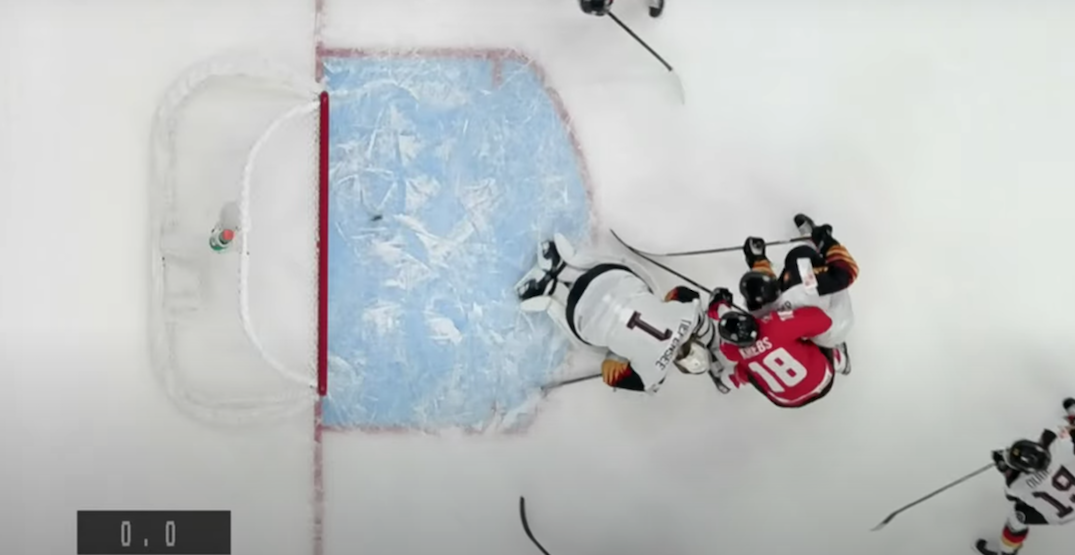 Beating Team Canada, in Canada, at the World Juniors was already a herculean task. But to make matters worse, Germany had to play the powerhouse Canadians on the second of back-to-back games with only 14 skaters due to multiple players testing positive for COVID-19 upon entry into the Edmonton bubble.

What else could conspire against them? Well, the clock apparently.

Already down 3-1 to Canada with the time running down in the first period, Canada scored an apparent buzzer-beater to take a three-goal lead into the intermission.

It looked like Peyton Krebs just scored with the buzzer- and after a review, IT COUNTS (?)

The goal went to video replay, with the TSN broadcast clearly showing that the puck had not crossed the line when time expired.

They counted the goal anyway.

Canada went on to win 16-2, so the goal wouldn’t have changed the outcome, but it certainly didn’t help matters for the undermanned Germans.

TSN later said they were fully confident that their clock was correct, as they had the arena clock synced with the overhead camera.

On Sunday, the International Ice Hockey Federation (IIHF) explained what happened, admitting their mistake on what they called a “technical miscommunication.”

“A discrepancy was identified between the game clock and the overhead goal clock of one tenth of a second,” the IIHF said in a media release today. “Based on the information that the video goal judge had at the time and the referee’s call on the ice, the decision was to award the goal to Canada.

“After consultation with all involved parties it was determined that there was a technical miscommunication involving the game and overhead goal clock systems.”

The IIHF says it has corrected the issue and doesn’t anticipate any further issues.

Germany will get some reinforcements for their next game, as three of their players were released from quarantine today. The Edmonton bubble now appears to be secured, as the IIHF announced no positive cases among the 1,554 COVID-19 tests conducted on the first two days of the tournament.

Canada’s next game is today against Slovakia at 6 pm ET/3 pm PT on TSN.