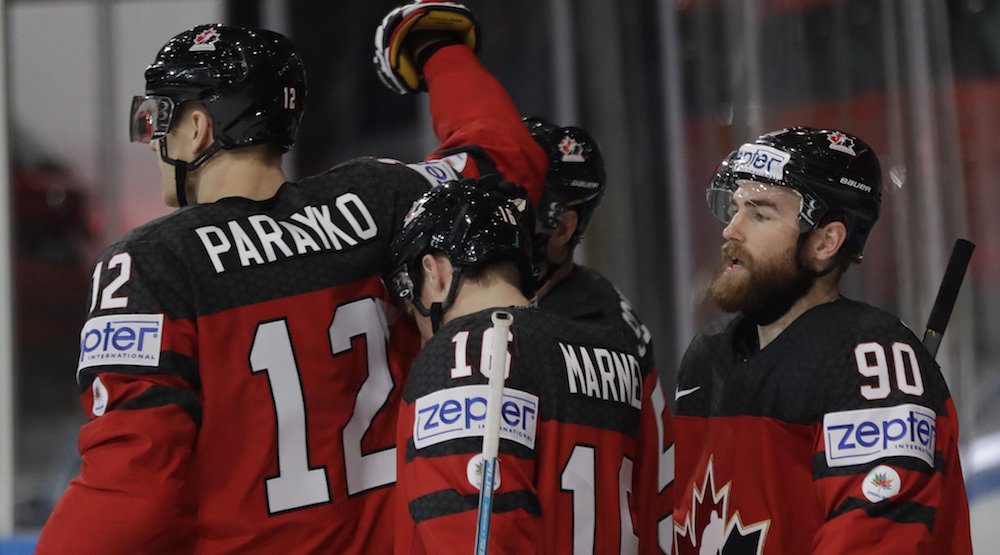 Team Canada continues to roll at the IIHF World Championships, defeating Germany 2-1 in the quarter-finals in front of a raucous crowd in Cologne on Thursday.

While the final score was close, this was a dominant effort by Canada, outshooting the host Germans 50-20.

“Germany gave us everything we could handle,” said head coach Jon Cooper. “We kind of knew this was the type of game this was going to be, and it was imperative that we get the lead. And we did.”

Canada scored once in each of the first two periods to take a 2-0 lead heading into the third period.

A pair of nice plays by Mitch Marner and Ryan O’Reilly led to the first goal, scored on the power play by Winnipeg Jets centre Mark Scheifele late in the opening period.

ICYMI: Mark Scheifele @markscheifele55 struck for Canada in the 1st period of #CANvsGER. It would stand as the GWG. #IIHFWorlds pic.twitter.com/BoMF6SNmr6

Carolina Hurricanes winger Jeff Skinner got the only goal of the second period, with Michael Matheson and Scheifele picking up the assists. The middle frame was a utter dominance by Canada, outshooting Germany 20-1.

The Germans stayed in the game because of Washington Capitals goalie Philipp Grubauer, who was outstanding, stopping 48 of 50 shots and being named Player of the Game for his country.

“What can you do when you run up against a goalie like him?” Team Canada defenceman Chris Lee said post-game. “He was fantastic. We put pressure on him all night, we created chances but in the end we got the win, and that’s what matters for us.”

Germany’s only goal of the game came from a remarkable play from former Vancouver Canucks defenceman Christian Ehrhoff, who made a breakaway pass from his own goal line to spring Yannic Seidenberg on a shorthanded breakaway. Seidenberg made no mistake, deking goaltender Calvin Pickard to give the home crowd a momentary sense of hope.

Canada is now 7-0-1 in the tournament, and will play Russia in the semis (Saturday, 6 am PT / 9 am ET on TSN). Russia has been impressive in the tournament, losing just once in seven games during the preliminary round, before defeating the Czech Republic 3-0 in the quarters.

Russia has a lot of firepower, and are led by Artemi Panarin and Nikita Kucherov, who lead the tournament in scoring. They’ve also got the best goaltender (statistically), in Andrei Vasilevskiy, who boasts a tournament-leading .946 save percentage, to go with three shutouts.

Canada has won the last two World Championships. A third straight tournament win would mark the first three-peat for Canada since 1950-1952.