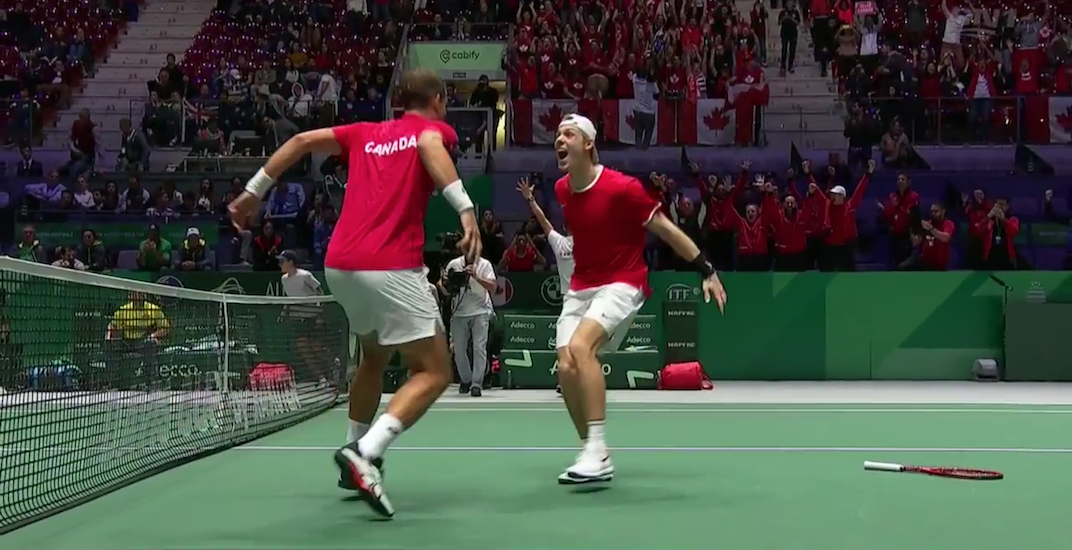 We could actually win this thing.

That’s what Team Canada has to be thinking after knocking off Australia at the Davis Cup on Thursday in Madrid.

This is what it means.

Canada defeats Australia 6-4 6-4 for a place in the semi-finals.

It’s the first time in the 119-year history of the men’s team tennis competition that Canada has ever beaten Australia. They were previously 0-9 all-time versus the Aussies, who have won the Davis Cup 28 times in their history. Canada is still looking for its first.

The Canadians split singles matches with Australia, setting the stage for doubles to decide the quarter-final winner. Denis Shapovalov and Vasek Pospisil overcame fatigue and an early break in the second set to team up for a straight sets victory (6-4, 6-4) over the well-rested Australian duo of John Peers and Jordan Thompson.

Shapovalov in particular had to overcome physical and emotional fatigue, playing the doubles match immediately following a three-set loss (6-3, 3-6, 7-5) to World No. 18 Alex de Minaur.

Pospisil continued his Cinderella run for Canada in place of the injured Felix Auger-Aliassime earlier in the day. Ranked 150th in the world, Pospisil beat World No. 48 John Millman in the opening singles match in straight sets (7-6, 6-4).

“It’s hard to put into words, there’s nothing quite like Davis Cup,” Pospisil told Sportsnet’s Arash Midani. “Especially for me, coming back from the injury, it means so much. I’m just enjoying my time on the court like never before.”

The win over Australia comes just two days after Canada’s first-ever triumph over the United States, the most successful country all-time in Davis Cup play.

This is the first year of the new Davis Cup format, which has streamlined its competition. “Ties” are now a best-of-three rubbers format, consisting of two singles and one doubles match. The Finals replaces the World Group, with 18 countries competing in the Finals at a central location.

Next up for Canada is a date with the winner of Serbia and Russia in the semi-finals on Saturday. Great Britain, Germany, Argentina, and Spain are the other countries still alive in the tournament.