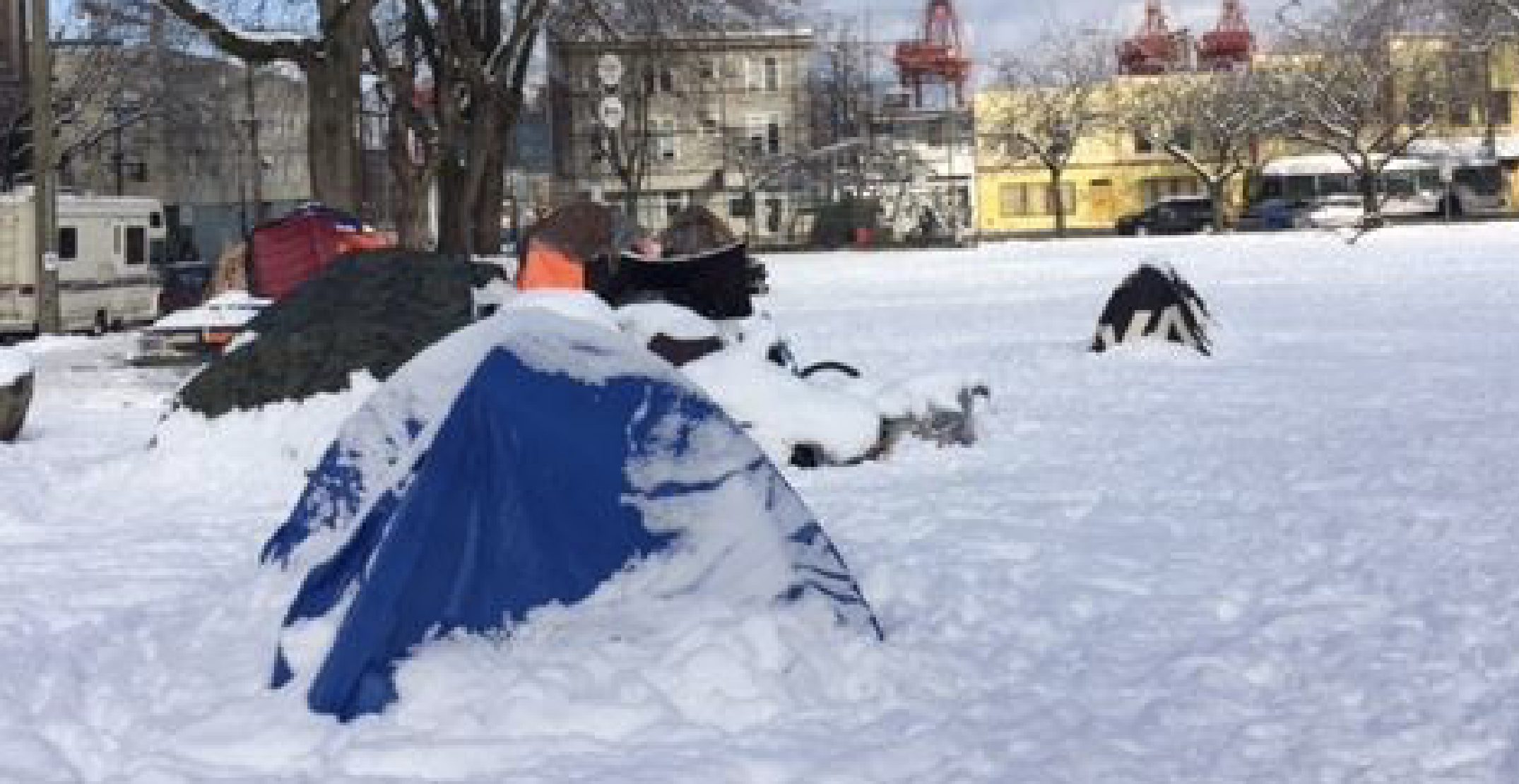 The recent spell of cold weather in Vancouver has community organizers concerned about the wellbeing of homeless campers at Oppenheimer Park in the city’s Downtown Eastside.

Members from the Carnegie Community Action Project (CCAP) counted an average of 48 tents per day over the last week. Most tents house two to three people, making for a total of between 80 to 100 campers.

CCAP notes that there are many challenges that come with living in the park including personal belongings becoming damp due to the weather, and condensation building up inside tents.

As well, raids and checkups are conducted by the city on a daily basis.

“Sometimes the staff are nice, and sometimes they’re not. Tenters have had racial insults and disrespect hurled at them and tents and belongings thrown away,” notes CCAP.

The organization also provides an example of two campers who go by John and Jessica (not their real names). They have been camping at Oppenheimer Park for weeks in the cold weather.

“When the washrooms close at the park at 5 pm, they have to walk for blocks to reach a washroom. John, a senior, had a fall on Monday and broke his glasses and sustained a gash on his forehead. They are tired of wet blankets and clothing. Their air mattress is too small for two, and cumbersome for their tiny tent so they are sleeping on the ground. John was offered a bed at an emergency shelter, but he doesn’t want to leave Jessica alone and vulnerable in the park, so he declined it,” reads the statement.

The CCAP has called on BC Housing and the City of Vancouver to house the campers or provide warming tents with peer support workers for safety and warmth.

“To date, no positive response has been received,” notes CCAP.

Fiona York of the CCAP told Daily Hive that residents can’t simply leave the park to stay at  cold weather shelters because “tents and belongings have been thrown away and destroyed when campers leave.”

“Most shelters are full, others have restrictive policies or are not desirable for other reasons. There are extreme weather shelters and warming centres, but the same reasons apply, and they are not always open.”

She says that those looking to help can drop off blankets and warm camping supplies (tarps, mats, insulating blankets) directly to tenters or to the field house Oppenheimer Park, but storage space is limited.

“I am sure food and hot drinks would also be very welcome,” she said.

“In the larger picture, we are asking for permanent housing that is affordable and accessible for even the hard to house. City, provincial and federal policies for housing are about making housing self-sufficient financially rather than investing in housing for our most vulnerable. “