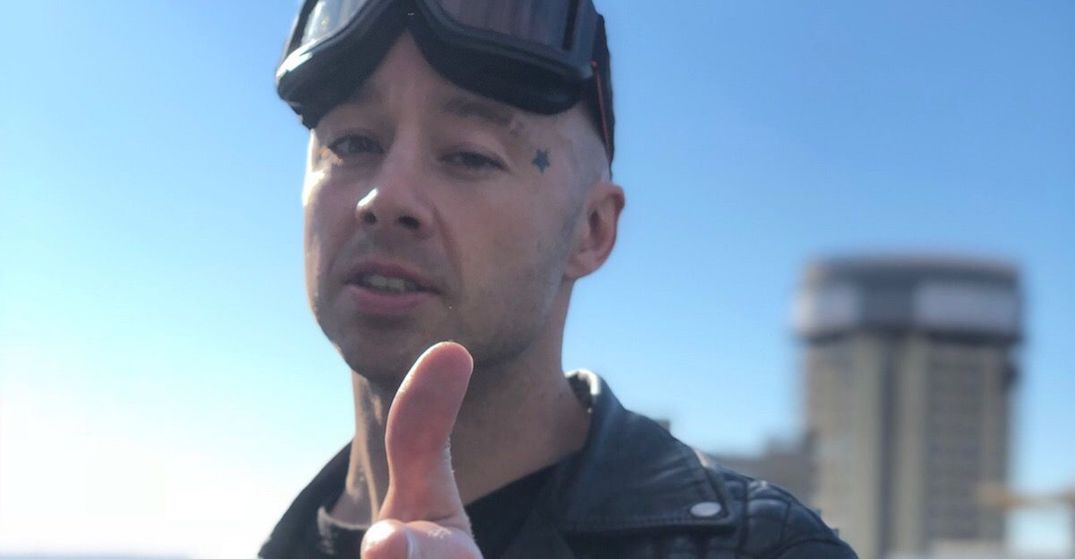 McMurray had been filming a video that would have shown him rapping while walking on the wing of a small plane, though flight complications led to McMurray falling from the plane without time to deploy his parachute, according to a statement from his management team.

“As Jon got further out onto the wing of the plane, it caused the small Cessna to go into a downward spiral that the pilot couldn’t correct,” said McMurray’s manager, Ryan Desrochers.

“Jon held onto the wing until it was too late, and by the time he let go, he didn’t have time to pull his chute. He impacted and died instantly.”

He had been working on the project for months, said Desrochers.

The Vernon North Okanagan RCMP responded to a private property in Westwold, BC and pronounced the 34-year-old dead at the scene, according to a release from the RCMP.

Following McMurray’s death, his friends and family created a GoFundMe page to raise enough money to turn the video and documents that the rapper left behind into a project celebrating his life.

“[Jon] touched and lifted so many people in his brief stay here. He also documented everything he did relentlessly,” the GoFundMe page reads.

“His close friends and family want to make something incredible with what he left us. It’s what he would have wanted most of all. This fund is to help his people get his stuff out there to the world in the right way.”

McMurray was originally born in Calgary, Alberta before becoming a professional freeskier. After suffering injuries including a shattered heel and a broken back, McMurray turned his attention towards music, making a name for himself as a rapper and performing at events like Centre of Gravity alongside some of hip hop’s biggest stars.

One of McMurray’s friends, Rory Buchfield, stated in an Instagram post that McMurray had been “living the ultimate dream, free and full.”

The sun is not as bright today as it was yesterday when it was shinning on my homies last moments. Jon james Mcmurray, my very best, dearest and oldest friend passed yesterday evening in a skydive accident. He was living his ultimate dream, free and full. May he Rest In Peace. I’m gonna miss him so much. Thanks for all the lessons over the years fee. You where such a good man, you brought up everyone around you and I promise to try my best to live as free as you did. Take care of my girl Sarah up there homie. I love you. All my love to his family and people.

One of McMurray’s final Instagram posts features a video of him skydiving and rapping along to his song “The Man” featuring Riff Raff.

McMurray’s team released a song of his on Monday as a final farewell. It can be listened to here:

Here is the statement in full from his management team:

Canadian Music artist Jon James McMurray has died performing an airplane stunt in Vernon, BC, on October 20 2018 just outside the town of West Wold between Vernon and Kamloops. Jon, born in Calgary, Alberta, grew up skiing in the Rocky Mountains. The 33-year-old was an accredited professional skier with multiple world firsts to his name. He was the first skier ever to backflip on, and backflip off a rail, he was known as one of the most innovative skiers during his time on the snow, and respected by the best skiers in the world. After sustaining multiple injuries including a broken back and shattered heel, Jon decided to peruse his growing passion for music. He poured his ambition for life into his music and relentlessly worked toward advancement in the music industry. Jon earned his way to the stage and loved to perform at large events like Center of Gravity alongside some of the biggest names in hip hop. His passion for making music videos and performing stunts were combined, and Jon pushed music in a new direction that was unchartered territory.

He died filming for a project he had been working on for months. His final act included performing an airplane stunt that included rapping while walking on the wing. He had trained intensely for this stunt, however, as Jon got further out onto the wing of the plane, it caused the small Cessna to go into a downward spiral that the pilot couldn’t correct. Jon held onto the wing until it was too late, and by the time he let go, he didn’t have time to pull his chute. He impacted and died instantly.

Jon was an incredibly passionate person and was always smiling. He filled everyone around him with positivity, and never spoke poorly about another person. He truly had a heart of gold. Jon would want to be remembered as a beacon of light to follow your dreams, and would want everyone to continue to be inspired through his music and life message. He is survived by Father Doug McMurray, Mother Jen McMurray, brother Jarred McMurray, wife Kali James McMurray, and countless close friends and fans alike. If you would like to hear more of his music and see more of his videos his team will be completing his projects and releasing all his content. You can contribute by going to his go fund me page here.