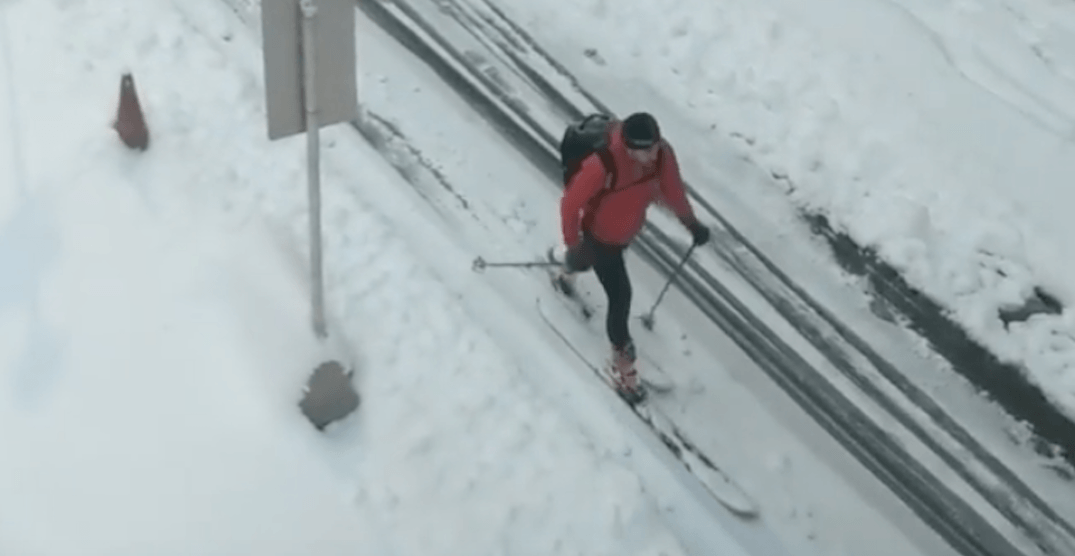 Calgary can either be described as a winter wonderland or a frozen nightmare, depending on who you ask.

One thing’s for certain: There’s a whole lotta snow.

We’re not just talking about a light dusting that blanketed the city in a nice white cover — we’re talking about roughly 40 cm deep of wet, heavy, so-deep-into-January-you-can’t-remember-what-warmth-is-like kind of snow.

But this is October, and many Calgarians (and Calgary buses) didn’t think to throw on their snow tires this early, meaning that the roads are an absolute mess.

The sidewalks are hardly any better, what with so much snow in such a little time and nowhere to put it all, as anyone who decided to forgo the drive and take the shoelace express will surely learn.

But then, out of all this chaos, you’ve got a few true Canadians emerging.

Gliding through the snow like some sort of northern folk heroes, these Calgarians are getting to where they’re going in style, one swift ski slide at a time.

There have so far been two skier-spottings in Calgary since the snow began to fall on Sunday night (though, to be honest, it could be two videos of the same person) and we really believe that the whole city should learn from their example.

Instead of gridlocked traffic, why not hordes of cross-country skiers tearing their way down Glenmore Trail? Forget putting snow tires on buses, just invest in installing a rope tow on Stephen Avenue.

Maybe one day, sure, but until then, we can just sit back and enjoy seeing true Canadians in their element.