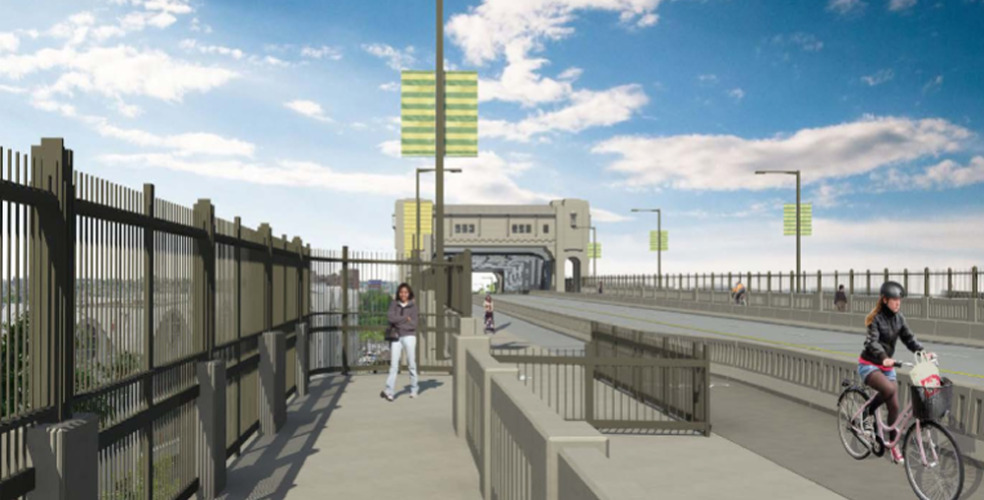 As construction commences to replace railings on the Burrard Bridge, one city councillor hopes to put a stop to the inclusion of suicide barriers that he feels would be unsightly.

Councillor George Affleck introduced a motion to City Council on Tuesday in a last ditch effort to lose the suicide barriers. It will be voted on in next week’s council meeting.

“There’s an opportunity right now before it’s too late to change our decision on that,” Affleck tells Daily Hive Vancouver. “We have certainly received significant correspondence from the public opposed to the fencing.”

While the public was consulted on proposed changes to the Burrard Bridge, organizations like Heritage Vancouver say the suicide barriers were left out of the equation.

“It is our fear that these new interventions will irrevocably alter the appearance of this much loved landmark heritage structure,” reads a letter addressed to Mayor Gregor Robertson from Heritage Vancouver. “Not only would the end result be a severely compromised asset, but it would also remain as an ongoing reminder to the people of Vancouver that our current civic government does not consider the maintenance of major heritage assets in a serious manner or engage with our citizens in a transparent and meaningful way.”

Aside from the issue of aesthetics – Affleck says Burrard Bridge is recognized internationally for its art-deco style – he thinks suicide fencing would ruin the experience of crossing the bridge for cyclists and pedestrians.

Some Vancouverites seem to agree. A change.org petition has been making the rounds since last year to stop suicide fencing from gracing the Burrard Bridge and has since garnered nearly 1,000 signatures. The petition suggests funnelling the money used to construct suicide barriers into counselling and awareness.

However, for some, potentially preventing suicides outweighs any aesthetic issues that may result from the installation of suicide fencing.

“Regardless of the aesthetics of the bridge, there are means to prevent suicide, and so we really need to consider that,” Kyle Tiney with the Crisis Intervention & Suicide Prevention Centre of BC tells Vancity Buzz.

Tiney says a significant number of studies shows that suicide fencing not only prevents people jumping from bridges, it lowers overall suicide numbers.

“When barriers are put in place, there are no displacements to other locations, so it does result in a decrease in suicide.”

He adds that the Suicide Prevention Centre of BC would like to see suicide fencing installed on every bridge in the Metro area.