Back in January, while listing our ten wishes for walking and cycling around Vancouver in 2015, we wrote the following about the permanent completion of the Burrard Bridge:

The Burrard Bridge was the first protected bike lane Gregor Robertson built during his first term as Mayor, and the numbers indicate it has been a tremendous success, but it was always designed as a temporary, trial facility. While having a pair of one-way cycle tracks on either side of the bridge deck is ideal, having walking prohibited on the east side is far from it. With seismic upgrades scheduled in the coming years, it is finally time to make these changes permanent, and ideal for both walking and cycling. The intersection on the north side at Burrard and Pacific is also long due for an overhaul, which is statistically one of the most dangerous junctions in the city.

According to details coming out of City Hall today, the widely-heralded rebalancing of transportation modes on the Burrard Bridge is about to be set in stone. One lane of vehicular traffic will be reclaimed for walking and cycling, reducing the largely over-engineered bridge down from five lanes to four. The single-direction protected bike lanes will be made permanent, with a more pleasant physical separation than the concrete barriers that currently exist. Finally, and perhaps most importantly, the east sidewalk will be restored, creating a comfortable and direct walking route on both sides of the bridge. 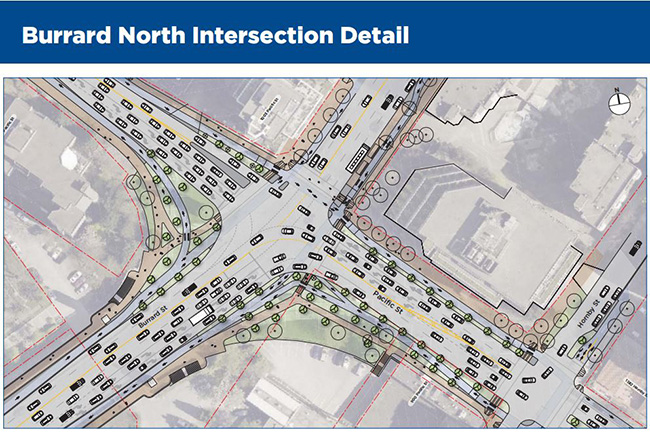 The plan also includes a much-needed reconfiguration of the intersection on the north side of the bridge (at Burrard and Pacific), which is most welcome news for drivers, pedestrians and cyclists alike. This follows similar work on the south side of the bridge (at Burrard and Cornwall), which has reduced the number of collisions, and significantly improved the walking and cycling connections into the downtown peninsula. 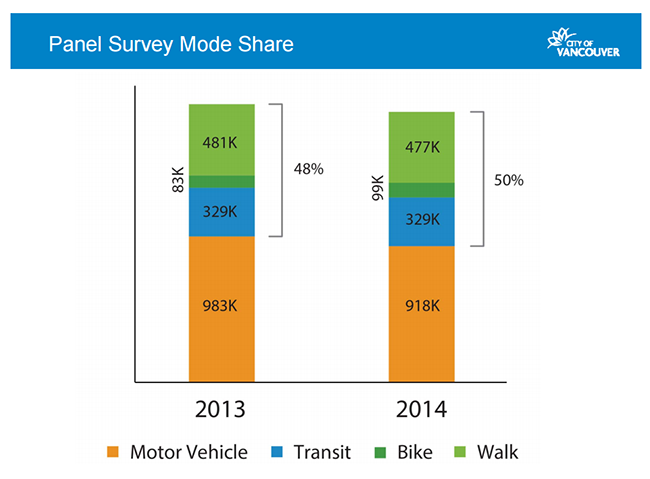 This comes on the back of the news that 50% of all trips in the City of Vancouver are now made by foot, bicycle, or public transit. Since the protected bike lanes were installed in 2008, the Burrard Bridge itself has consistently seen a million bicycle crossings each and every year, with an average 5% annual increase. And with the improvements to the  intersection at Burrard and Cornwall, and the completion of the Point Grey Greenway, 2015 stands to be a record-breaking year. The first four months of 2015 saw a 39.7% increase in bike traffic over 2014, with the millionth trip expected to be made in late July. 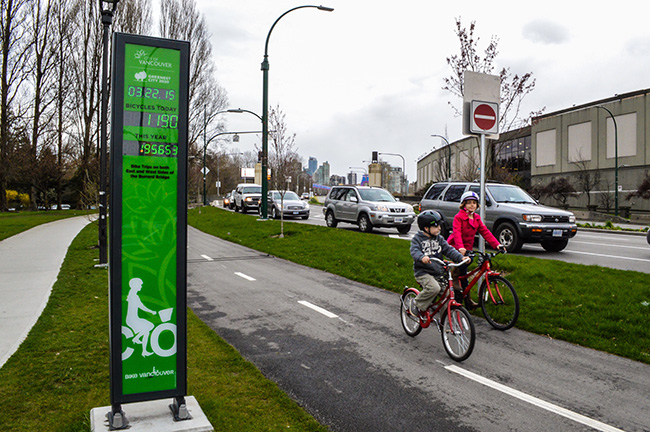 Hopefully, this means improvements to the Cambie and Granville Bridges aren’t far behind…