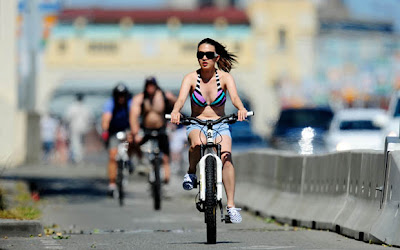 Photo and source: The Province,  taken by Nick Procaylo

In the battle of Vancouver cyclists and drivers you can chalk up another victory for cyclists as the protected Burrard Bridge bike lane is here to stay. Vancouver city council voted unanimously in favour for this as they deemed the trial period a huge success. If you look at the numbers I guess they don’t lie as more than 1 million cyclists used the bridge over a 1 year trial period, a 26% increase according to our illustrious mayor Robertson.

The announcement isn’t getting the thumbs up from everyone. Naysayers being mainly drivers and local businesses that claim to be feeling the pinch as vehicular traffic has decreased over the span.

Irrespective of complaints, council approved $2 million for work to rehab the bridge, which is badly needed. This work will include a more aesthetically pleasing barrier. I’m thinking it will be similar to what they did on the Dunsmuir bike lane and at the same time more in tune with the art deco bridge itself. This is a far cheaper option then the proposed cyclist and pedestrian only bridge over False Creek, which was gaining momentum last year.  However, we haven’t heard much about that and don’t expect to see that anytime soon, even if it did look cool.
Furthermore, the adjacent areas are full of cycling enthusiasts so this lane makes complete sense. The same can’t be said about the Dunsmuir lane, but I guess time will tell or good old political spin doctoring will prevail. Either way look for more bike lanes as long as Gregor Robertson is at the helm.
On a side note, kudos to Nick who took this shot and The Province for using it. Good job.
VancityBuzz.com