An apartment building landlord fed up with tenants letting their dogs poop in the hallway is turning to DNA technology to solve the mystery.

Tenants of a Burnaby building who own dogs received a letter on the weekend demanding they submit a canine stool sample, after someone’s dog pooped twice in the hallway.

Refusing the demand would be construed as an admission of guilt, the warning read.

“Refusal is not an option, rather admission of guilt, and reason for immediate eviction, as the law is on our side. We have to protect the health and well-being of the other tenants,” the letter, submitted to Reddit, reads.

The landlord says the poop samples will be sent to a lab that will analyze it against the poo found inside the building, which is in the 7400-block of 14th Avenue.

“The good news is that the technology exists and the dog can be identified,” it reads.

Tenants of the building said the request amounted to an invasion of privacy and questioned the legality of such a demand.

The Tenant Resource & Advisory Centre told CBC News that a tenant could not be evicted for refusing to submit a sample of their dog’s poop – but the offending dog’s owner could face eviction if caught. 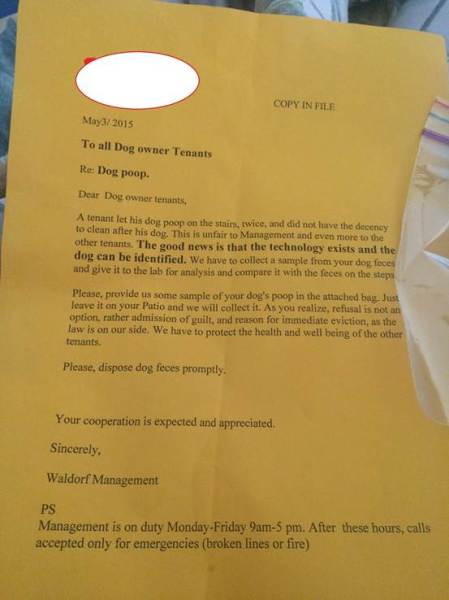