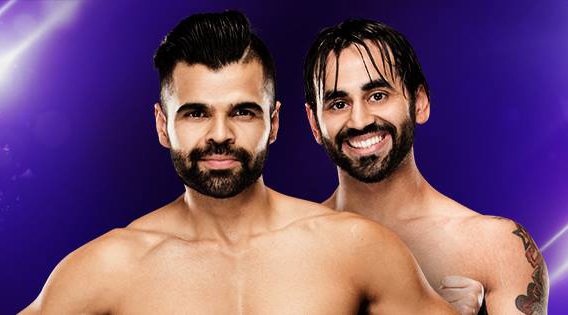 Gurv Sihra (left) and Harv Sihra, AKA the "Bollywood Boyz" and the "Singh Brothers" (The Singh Brothers/Facebook)

Burnaby brothers, Gurv and Harv Sihra, AKA the “Bollywood Boyz” and the “Singh Brothers,” are making a name for themselves in the WWE Smackdown Live.

Their most recent success came last weekend, when they made their Smackdown debut in a match between Calgary’s Jinder Mahal and Quebec’s Sami Zayn.

It was an all-out Canadian affair in the 6-Pack Challenge to determine the No. 1 contender for the WWE Championship–and it was the “Singh Brothers” who made the difference.

The pair helped Mahal to victory and a shot at the title; they can be seen here, pulling Zayn away from the ring and the win he needed.

The brothers, who graduated from Moscrop Secondary school in Burnaby, have wrestled across various leagues around the world including Extreme Canadian Championship wrestling, TNA sponsored ‘Ring ka King’ in India and Global Force Wrestling (GFW).

They were introduced to the WWE universe when they competed in the WWE Cruiserweight Classic tournament in June 2016 and were sporadically used in their programming after that event.

Darrell Francis, a WWE Smackdown Live fan commenting on a video of the match, said that the storyline is ridiculous.

“So you have the best wrestler in the company A.J. Styles wrestling for the U.S. title and you have Jinder Mahal wrestling for the world title. Whoever is in charge of this storyline should be fired. This is ridiculous,” Francis said on the Smackdown Live’s Facebook page.

When someone says @JinderMahal deserves a WWE Championship match. pic.twitter.com/ag6FmId0Lq

We are going to see a @WWE ppv headlined by Jinder Mahal. 2017 you so crazy.

And of course the Bollywood Boyz came in for some praise too:

Did I just see @BollywoodBoyz ?!?!?!?#SmackDownLIVE

I really hope that the upcoming @WWEVancouver show is the #SDLive crew. The reaction to the @BollywoodBoyz retuning home would be thunderous

WWE recently posted a video of the “Bollywood Boyz” visiting a Vancouver Sikh temple, an indication the brothers and Mahal could be targeting an Indian audience.

Upcoming Smackdown events are sure to be an interesting watch, to see the direction the WWE creative will take on Mahal, the Singh Brothers and their alliance.