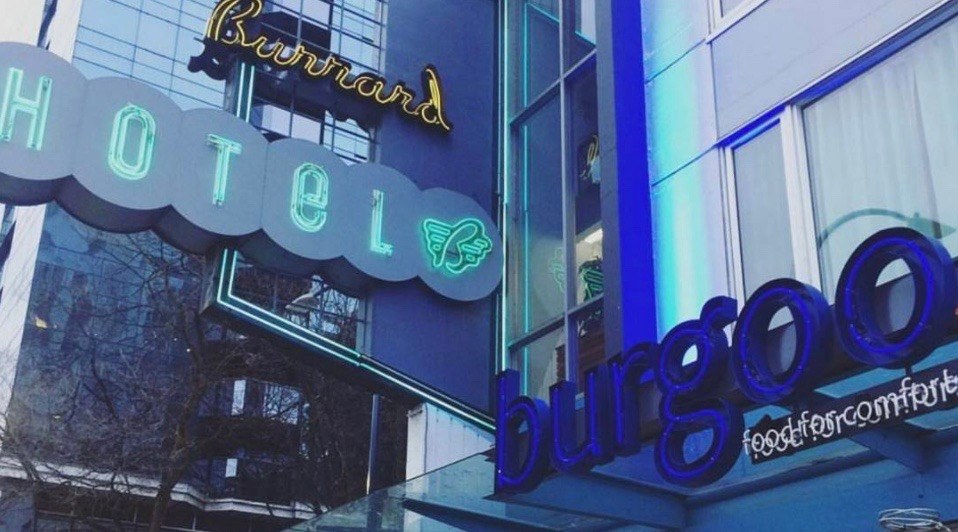 Downtown Vancouver is about to get very comfortable.

Burgoo has put up their signature blue neon and lowercase-lettered sign at a new space located at 1100 Burrard Street.

Nestled next to the Burrard Motor Inn Hotel in the heart of Downtown Vancouver, the bistro will be taking over the space previously leased by a 7/11.

This will be the fifth location for the restaurant, which is known for its homemade soups, salads, sandwiches, pot pies, mac and cheese, and overall good vibes and relaxing atmosphere.

Burgoo owner Justin Joyce told Daily Hive by phone that once the West End restaurant is ready, guests can expect the same Burgoo menu and ambiance they know and love. The only difference for the Burrard location will be in its decor.

“While it will feel like a Burgoo, there will be different fixtures, wall finishings, and that kind of stuff. There will be a remodelling in that sense,” says Joyce.

This spot will tentatively be opening in late March or early April – although, as we know, this is subject to change based on permits and construction.

“The footprint is a bit bigger, and the design is a bit different, there’s a lot of light for example, because there’s so many windows. The roof will be quite low, so it will be cozy and bright, which is different from the usual cozy and dark Burgoo,” says Joyce.

The bistro owner says he is looking forward to opening this location and having downtown residents discover Burgoo–if they haven’t already by visiting the Point Grey, North Vancouver, Mount Pleasant, or Kitsilano locations.

“It’s a whole new region, the downtown is a very established area. There are tons of people that live down there who can enjoy the restaurant. I’m really excited to be a part of that neighbourhood.”

The first Burgoo opened in December 2001 in Point Grey, and 16 years later it’s clear Vancouverties can’t get enough of the bistro and its old school charm.