UPDATE: Labatt Breweries Canada issued a statement to Vancity Buzz on Thursday, stating:  “The Bud Light marketing campaign that has been referred to in your story is not a Labatt campaign, but a US campaign being conducted by Anheuser-Busch.  There is no such campaign in Canada and the bottles in question are not available in Canada. Neither Labatt nor Anheuser-Busch would condone disrespectful or irresponsible behavior. Anheuser-Busch has apologized and stopped production of these labels. We take this issue very seriously.” – Maria Guest, Marketing Director, Bud Light.

Sometimes we wonder how ads like this get through dozens of people without being red flagged, but Budweiser staff clearly did not notice that they were promoting rape culture with their latest tagline.

Budweiser first made waves with their #UpforWhatever campaign that kicked off around St. Patrick’s Day, sparking outrage that the company was propagating rape culture and sexual assault through advertisements that included copy such as “On St. Patrick’s Day you can pinch people who don’t wear green. You can also pinch people who aren’t #UpforWhatever.” 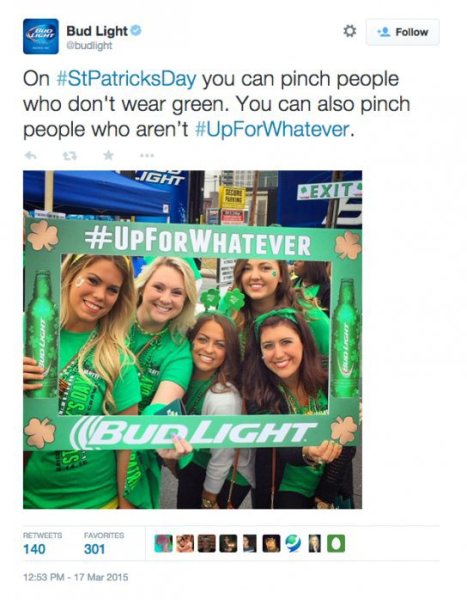 Though Bud Lite deleted the offending tweet, they are back at it again with an even worse tagline that appeared on bottles. It seems no one in their marketing department quite understands that belittling the issue of consent is wrong – very, very wrong.

An image of the bottle under question first appeared on Reddit earlier this week. On the beer’s label, it reads “The perfect beer for removing ‘No’ from your vocabulary for the night. #UpForWhatever.” 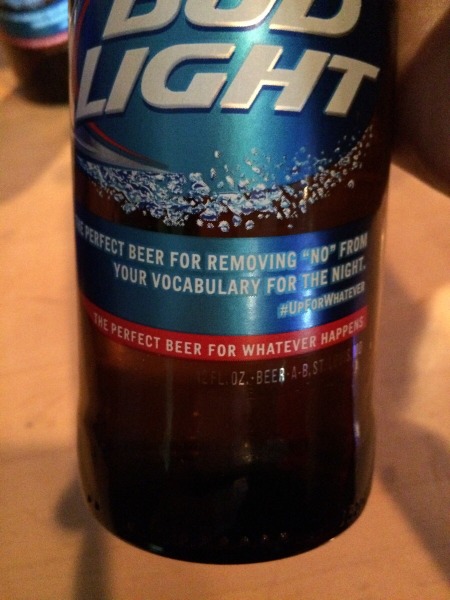 On Twitter, responses to the ad showed anger, incredulousness and outrage.

Hey @budlight, have you asked sexual abuse survivors if they’re #UpForWhatever? No. Didn’t think so. They tried to say, “No” too.

What Corporate Knucklehead let “TAKE NO OUT OF THE NIGHT” be printed on BUD LIGHT Bottles, are you for real? Awful lack of regard for Women

.@budlight wants to you to not say NO with their new slogan. Rapey disturbing down right VILE. Shame on you for this pic.twitter.com/u5WtII34B5

.@budlight, no means no. This ad perpetuates rape culture and we’re #NotBuyingIt https://t.co/RYuOxka54q

“The Bud Light Up for Whatever campaign, now in its second year, has inspired millions of consumers to engage with our brand in a positive and light-hearted way. In this spirit, we created more than 140 different scroll messages intended to encourage spontaneous fun. It’s clear that this message missed the mark, and we regret it. We would never condone disrespectful or irresponsible behavior.”

The company has now ceased production on all bottles containing the phrase.

In the spirit of education, in case anyone was wondering why so many see red after reading Bud’s tagline, here is a handy analogy to understand how consent works, courtesy of of the blog rockstar dinosaur pirate princess:

Whoever you are initiating sexytimes with, just make sure they are actually genuinely up for it. That’s it. It’s not hard. Really.

If you’re still struggling, just imagine instead of initiating sex, you’re making them a cup of tea.

You say “hey, would you like a cup of tea?” and they go “omg fuck yes, I would fucking LOVE a cup of tea! Thank you!*” then you know they want a cup of tea.

If you say “hey, would you like a cup of tea?” and they um and ahh and say, “I’m not really sure…” then you can make them a cup of tea or not, but be aware that they might not drink it, and if they don’t drink it then – this is the important bit – don’t make them drink it. You can’t blame them for you going to the effort of making the tea on the off-chance they wanted it; you just have to deal with them not drinking it. Just because you made it doesn’t mean you are entitled to watch them drink it.

They might say “Yes please, that’s kind of you” and then when the tea arrives they actually don’t want the tea at all. Sure, that’s kind of annoying as you’ve gone to the effort of making the tea, but they remain under no obligation to drink the tea. They did want tea, now they don’t. Sometimes people change their mind in the time it takes to boil that kettle, brew the tea and add the milk. And it’s ok for people to change their mind, and you are still not entitled to watch them drink it even though you went to the trouble of making it.

Ok, maybe they were conscious when you asked them if they wanted tea, and they said yes, but in the time it took you to boil that kettle, brew the tea and add the milk they are now unconscious. You should just put the tea down, make sure the unconscious person is safe, and – this is the important bit – don’t make them drink the tea. They said yes then, sure, but unconscious people don’t want tea.

If someone said yes to tea, started drinking it, and then passed out before they’d finished it, don’t keep on pouring it down their throat. Take the tea away and make sure they are safe. Because unconscious people don’t want tea. Trust me on this.

If someone said “yes” to tea around your house last saturday, that doesn’t mean that they want you to make them tea all the time. They don’t want you to come around unexpectedly to their place and make them tea and force them to drink it going “BUT YOU WANTED TEA LAST WEEK”, or to wake up to find you pouring tea down their throat going “BUT YOU WANTED TEA LAST NIGHT”.

Do you think this is a stupid analogy? Yes, you all know this already – of course you wouldn’t force feed someone tea because they said yes to a cup last week. Of COURSE you wouldn’t pour tea down the throat of an unconcious person because they said yes to tea 5 minutes ago when they were conscious. But if you can understand how completely ludicrous it is to force people to have tea when they don’t want tea, and you are able to understand when people don’t want tea, then how hard is it to understand when it comes to sex?

Whether it’s tea or sex, Consent Is Everything.