The only thing holding soccer back is the potential for injury when sprinting into the opposing team at full speed. Thankfully, Bubble Ball Vancouver solves that.

Bubble Ball plays more or less like regular soccer, only players on both sides are encased from the waist up in giant inflatable balls. It only started up in Metro Vancouver a couple of years ago, but according to Bubble Ball Vancouver owner Amaan Jaffer, the sport is taking off.

“The Bubble Ball business doesn’t seem to stop! In summer time we get the large groups of adult friends, bachelor parties, and bachelorette parties non-stop,” he says. “We play outdoors and indoors. In the winter, we estimated a slow-down but it was just as busy as before. We had groups of corporate parties and events, kids birthday parties, and were kept busy by sports team wrap ups.” 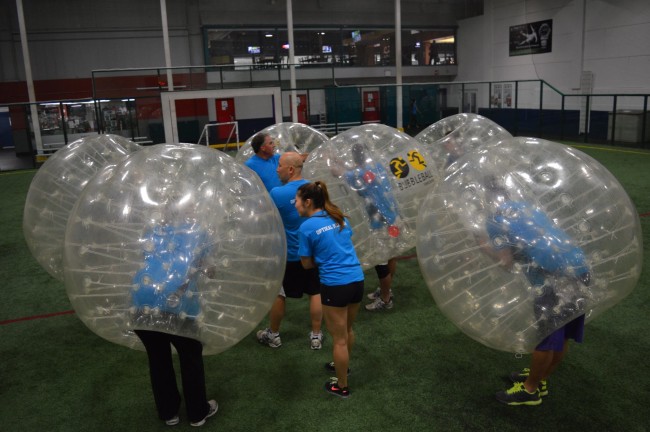 While word is still spreading, Jaffer says once people get on the field or court, they always come out thinking the same thing.

“Players’ initial reactions are always: surprised at how hot it gets, [that they’re] running as fast as possible towards their friends, and shocked that neither of them got hurt,” he says. “The hits look huge but we have yet to have a serious injury outside of a bruised knee or sprained ankle.”

With the upcoming tournament, Jaffer says things get real. Staged as a double round elimination, teams will have at minimum two games to prove their worth. There are a few rules:

You don’t even need a team to sign up. If you’re a player without a team, Bubble Ball Vancouver will link you up with a team looking for players.

With expansions in the future, the inclusion of Water Balls, and the upcoming Hamster Balls and Soccer Pool Tables, things are looking up for Bubble Ball.

“We are really hoping to take the world of inflatable sports to the next level,” says Jaffer.