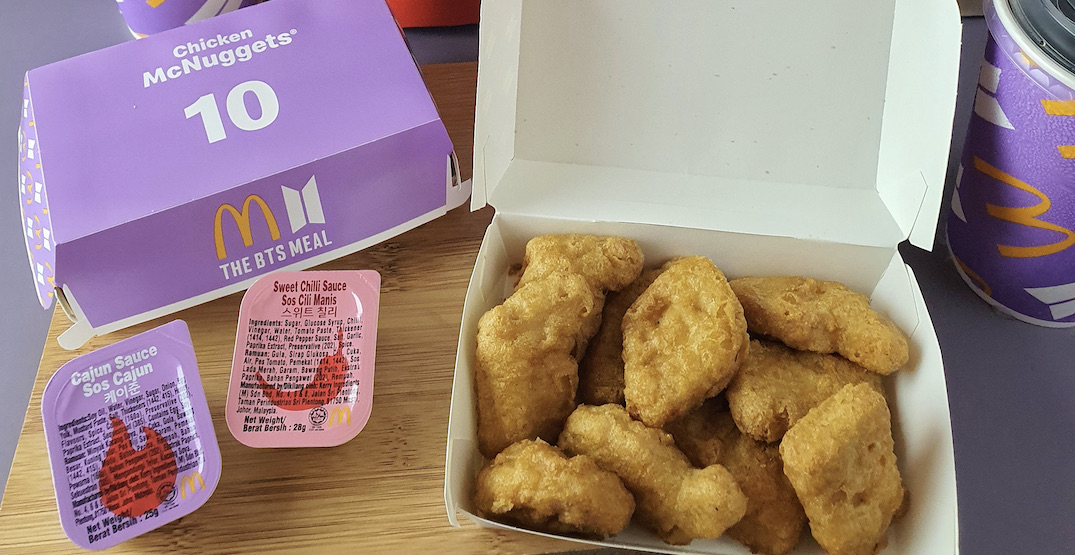 The musicians teamed up with McDonald’s for an official band meal, which was advertised to arrive in special purple packaging.

Last week, after the meal’s launch, some people got regular McDonald’s cups, bags, and boxes, and they were not happy.

When it comes to Canada, McDonald’s says the purple packaging is rolling out across the country and should be available at most locations.

But, for those who can’t seem to track down the high-profile paper memorabilia, you have another, albeit more expensive way to lock some down.

Some folks who were lucky enough to snag the packaging have taken to eBay to make a profit by reselling the in-demand materials at a higher price point than one would expect.

In one case, a medium BTS McDonald’s cup is up for $70. Yes, for one cup. If you think that’s a lot, check out these open BTS sauce containers going for $15.

Looking for all four items from the meal? Get the whole bundle for a cute $120.

There are currently hundreds of listings on eBay alone, proving that BTS fandom is more dedicated than some of us could ever imagine.

People have even posted TikToks of themselves trying to wash the grease stains out of the coveted paper BTS bags. The dedication is real.

To many, these prices might seem unreasonable — but clearly, for collectors and serious fans you can’t put a price on BTS merch (even if there’s a ketchup stain on it).

Orders for the BTS meal can be placed online, in-restaurant, or through the McDonald’s app for delivery until June 20.