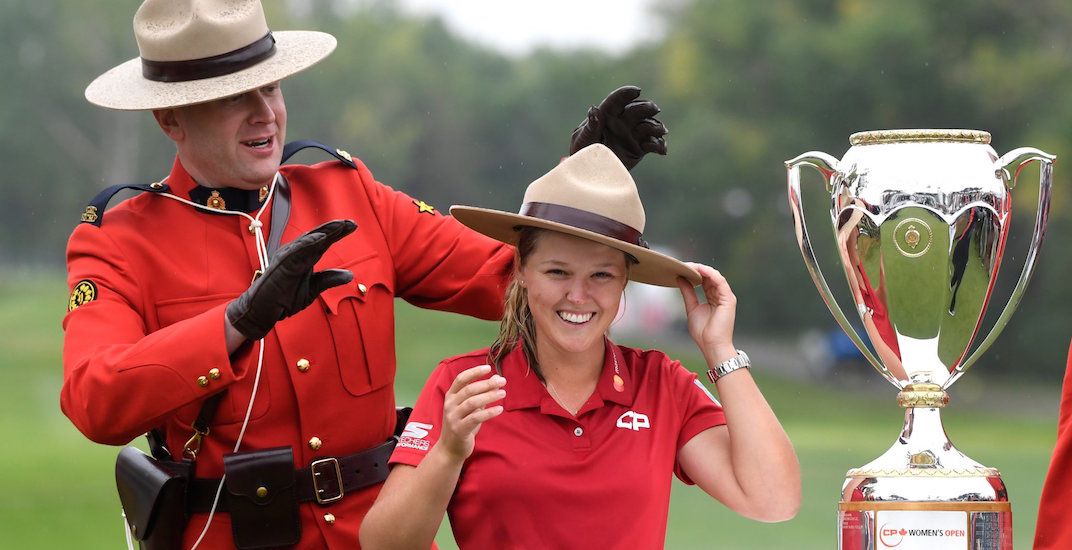 After sinking the final putt to win the CP Women’s Open, champagne flowed. Not long after, so did tears.

It was an emotional, and historic victory for Canadian Brooke Henderson Sunday at the Wascana Country Club in Regina on Sunday.

Shooting a final-round 65 for a four-stroke victory over Angel Yin, she became the first Canadian to win our country’s national tournament since Jocelyne Bourassa in 1973 – 24 years before Henderson was born.

The 20-year-old native of Smiths Falls, Ontario has been in big moments before – she had won six LPGA tournaments before this weekend, including a Major in 2016 – but this one was special.

Henderson’s family has gone through a lot this summer, with both of her grandfathers dying in the last three months.

“I think just all the hard work that my family has put into this, my dad and my coach, my mom, my best supporter, and my sister, who’s also my caddie,” said Henderson. “This was a big dream and a big goal for all of us, and I think it’s just a cumulative effort of all of us that gave me the chance to be able to lift that. I mentioned I thank God for this, for this win and just the many opportunities that I’ve been given. My grandfathers have passed away this summer, and I really think they were helping me today.”

As Henderson stood on home soil as a national champion, with fans in Saskatchewan singing O Canada, it was a beautiful moment. It was enough to make any Canadian get a little misty-eyed.

Such a great moment in Canadian sport! Congrats @BrookeHenderson!

What an incredible moment for golf in canada. The extra pressure that comes with playing at home can be difficult to handle but you crushed it! One of us had to win on home soil first! Congrats @BrookeHenderson!!