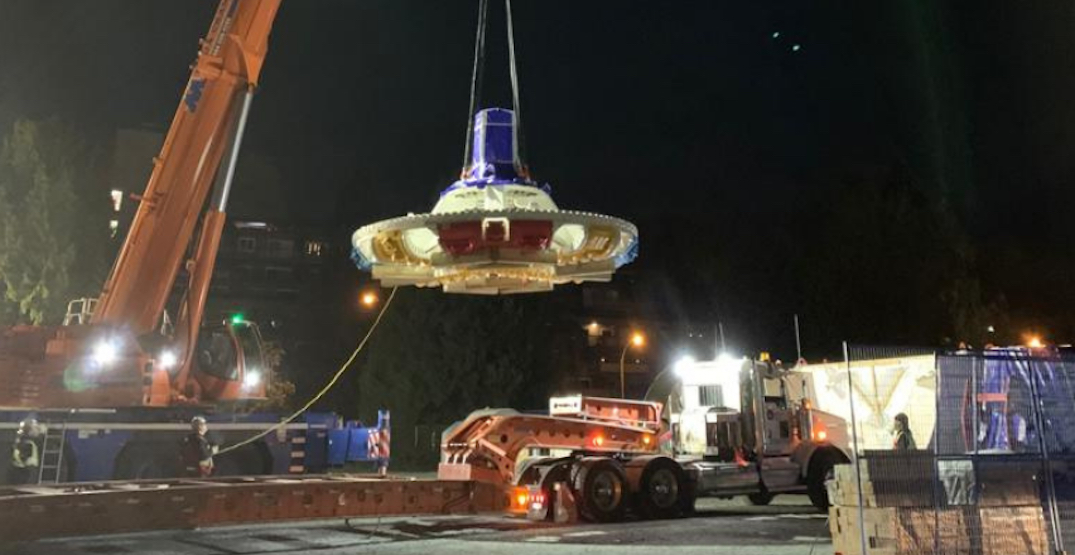 Arrival of a part of the tunnel boring machine for the SkyTrain Millennium Line Broadway Extension on April 15, 2022. (Government of BC)

Two identical tunnel boring machines to be used for SkyTrain’s Millennium Line Broadway Extension project have begun to arrive in Vancouver, according to a project update today by the BC Ministry of Transportation and Infrastructure.

As each tunnel boring machine (TBM) is gargantuan in size, with a width of six metres (20 ft) and a length of 150 metres (492 ft; almost the length of a football field), and weighs nearly one million kilograms, they need to be shipped in parts.

The parts for the TBM, built by manufacturer Herrenknecht, left Germany in late February and sailed through the Panama Canal before arriving at Fraser Surrey Docks late last week. The second and final shipment of parts is expected in the coming weeks.

The various parts will then be assembled in the excavated tunnel boring pit at the intersection of Great Northern Way and Thornton Street, which will also double as the subway station footprint for Great Northern Way-Emily Carr Station. 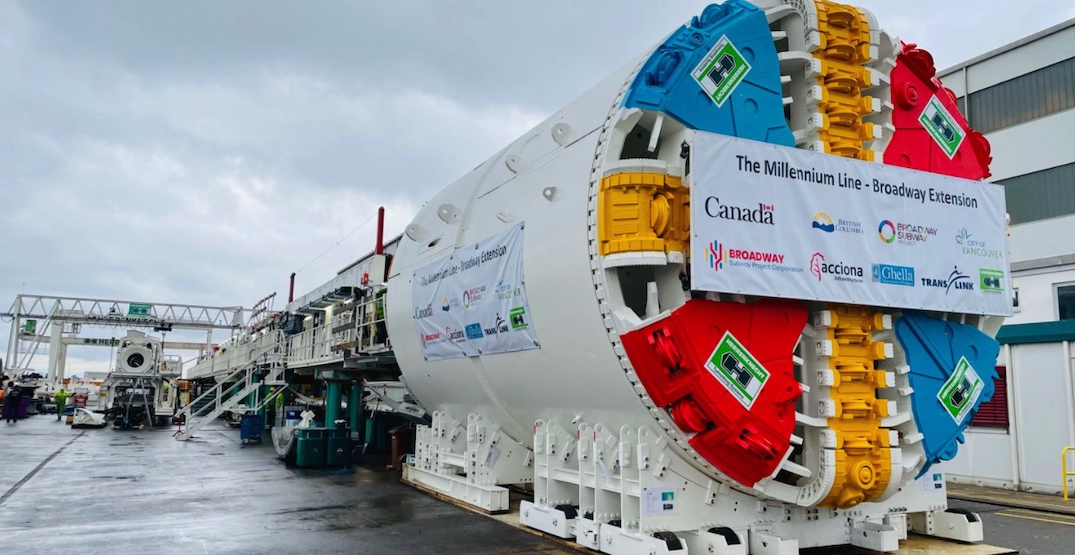 Tunnel boring machines (TBMs) for the Broadway Subway of extending SkyTrain Millennium Line at the manufacturing facility in Germany earlier in 2022. (Bowinn Ma/Twitter) 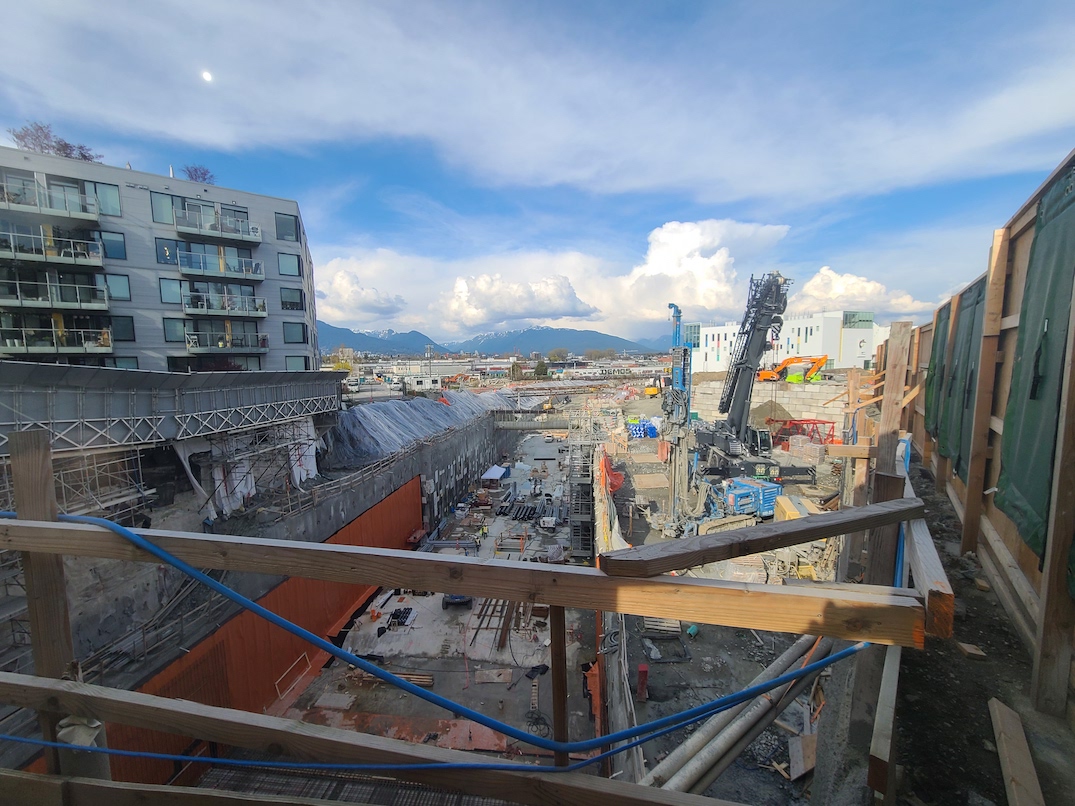 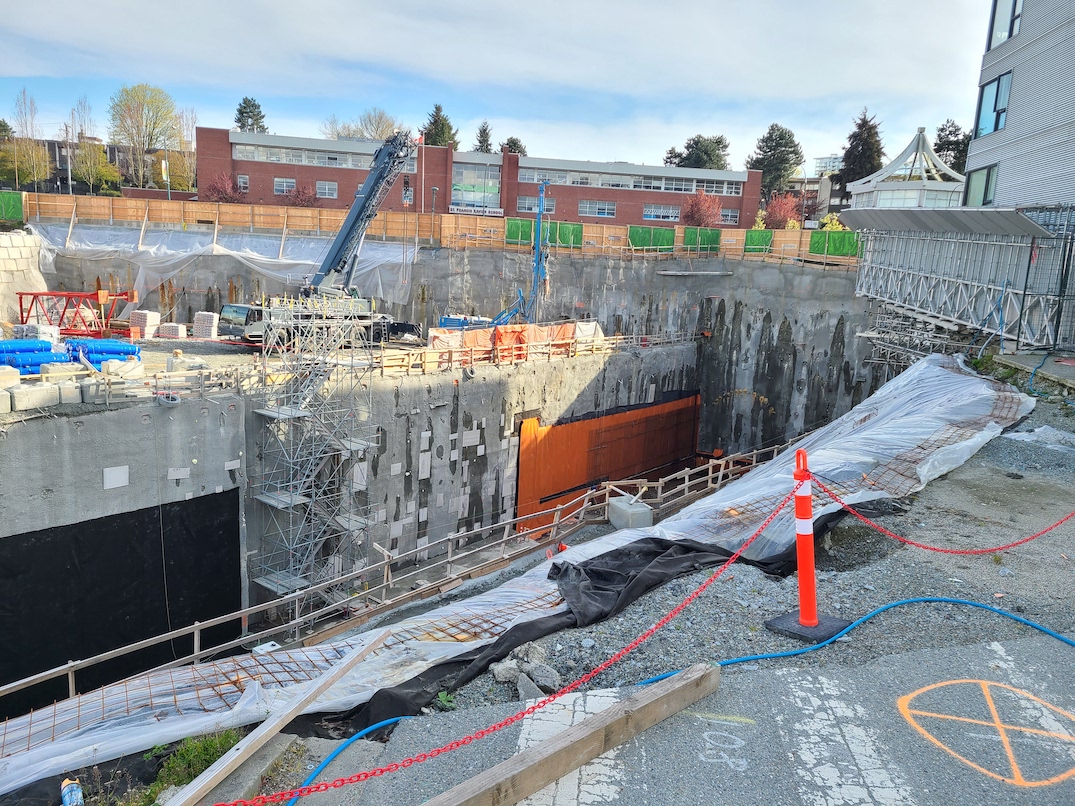 Each machine will be responsible for boring one of the two tunnels between Great Northern Way-Emily Carr Station and Arbutus Station — a distance of about five kilometres, passing through four stations on Broadway along the way, stopping just before Arbutus Station. At Cypress Street, the TBMs will be disassembled and removed through an excavation shaft.

The tunnels will be about 15 metres (50 ft) below ground, down to a maximum depth of 20 metres (66 ft) at Broadway-City Hall Station to dive beneath the Canada Line tunnel.

Following the global tradition for tunnel boring for subway projects, and just like practices for the Canada Line and Millennium Line Evergreen Extension, an official ceremony will be held to commemorate the start of tunnelling, which is expected to begin this summer.

The TBMs will create about 18 metres (60 ft) of new tunnel daily, with each machine having a staff of eight to 12 controlling them and monitoring 24/7. Excavation of the twin tunnels will generate about 200,000 cubic metres of soil that will be removed through a conveyor system leading to the tunnel boring pit at Great Northern Way.

The tunnel boring process for the Broadway Extension is different from the Canada Line, which used a single TBM for both of its tunnels by returning the machine back to its starting point for its second run, while the Evergreen Extension used a single large TBM with a width of 10 metres (33 ft) to build a single tunnel that contained the tracks for both directions.

Extensive geotechnical testing and analysis were performed along the Broadway Extension route to prevent a repeat of the tunnel boring challenges experienced with the Evergreen Extension, which led to significant delays in the project’s opening.

Another 700 metres of the Broadway Extension project will be an elevated guideway between the existing VCC-Clark Station and the tunnel portal east of Great Northern Way-Emily Carr Station.

Major construction on the $2.8 billion project first began in Spring 2021, specifically the Broadway road decks for the cut-and-cover segments for only the subway stations, and other site preparation activities. 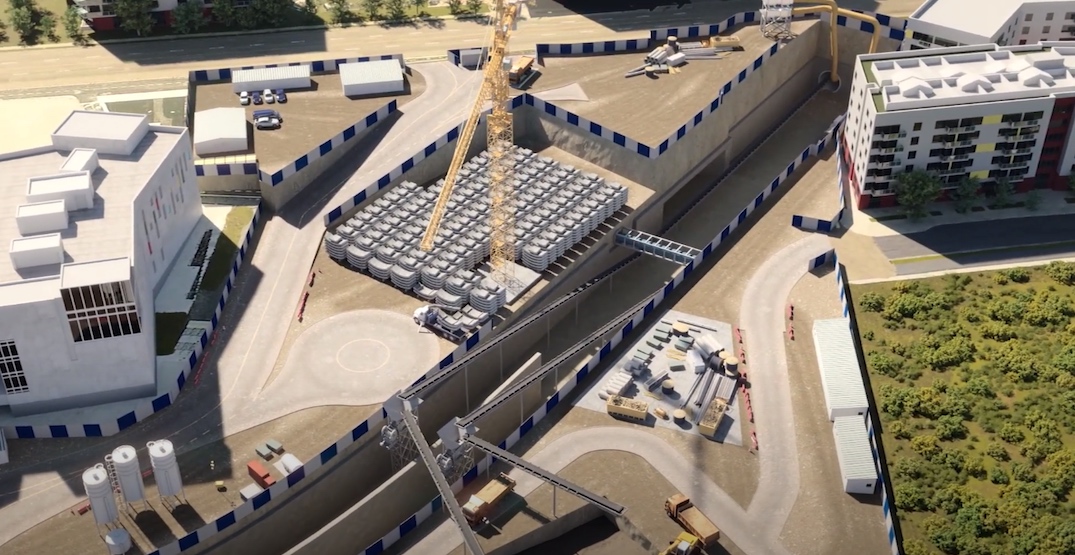 Artistic rendering of the Broadway Subway’s tunnel boring staging area at the intersection of Great Northern Way and Thornton Street, where Great Northern Way-Emily Carr Station will be located. (Government of BC) 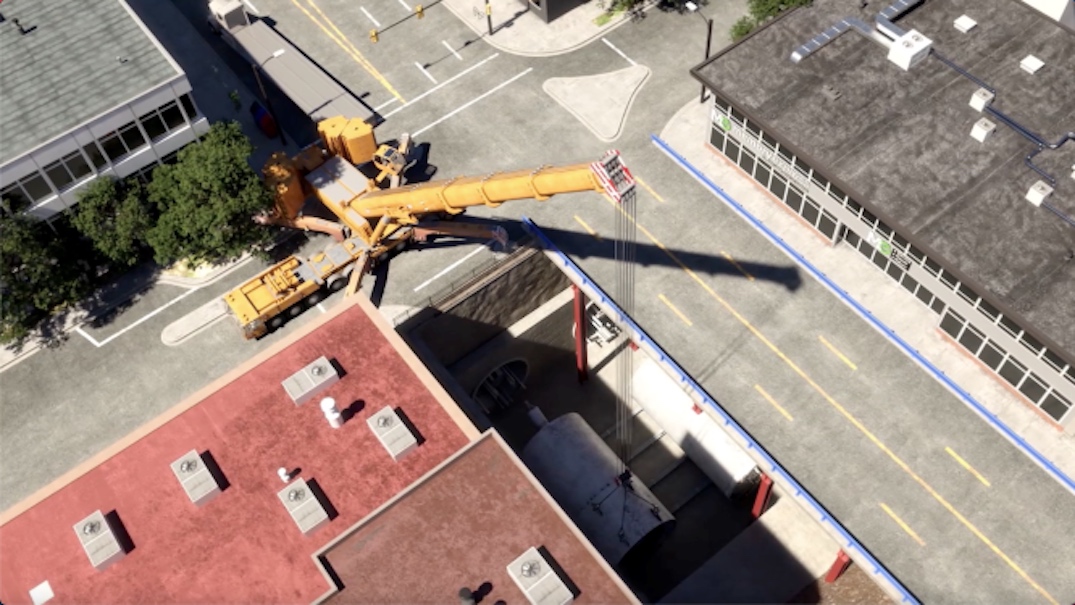 Artistic rendering of the tunnel boring machine removal process at Arbutus Station. (Government of BC)

Tunnel boring for the subway is anticipated to reach completion in Summer 2023, and the entire 5.7-km-long Millennium Line extension is expected to open in 2025. The end-to-end travel time between Lafarge Lake-Douglas Station and Arbutus Station on a one-train ride will be 47 minutes, while the travel time between Commercial-Broadway Station and Arbutus Station will be 12 minutes — down from nearly an hour on the 99 B-Line during peak hours.

Upon the opening of the subway, the 99 B-Line will have a truncated route starting from Arbutus Station’s bus exchange for the remaining journey to the University of British Columbia’s campus, until the Millennium Line is further extended all the way to the university. TransLink anticipates the shortened 99 B-Line service will reach capacity during peak hours upon the opening of the subway. 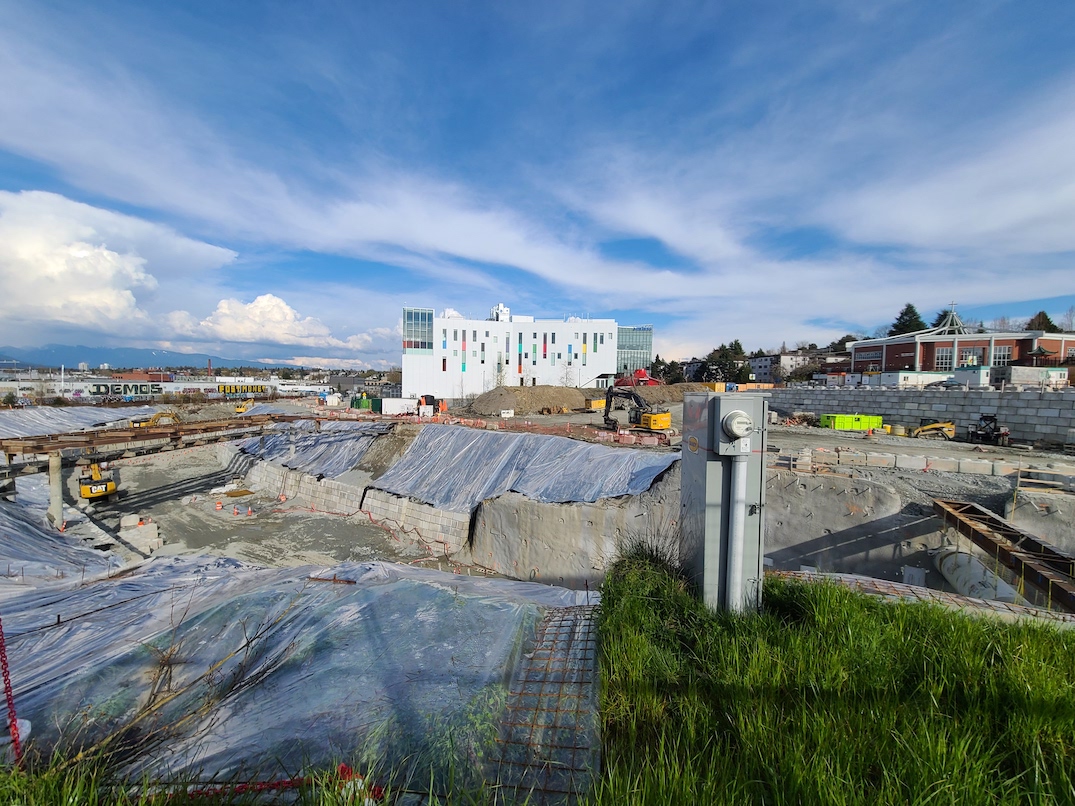 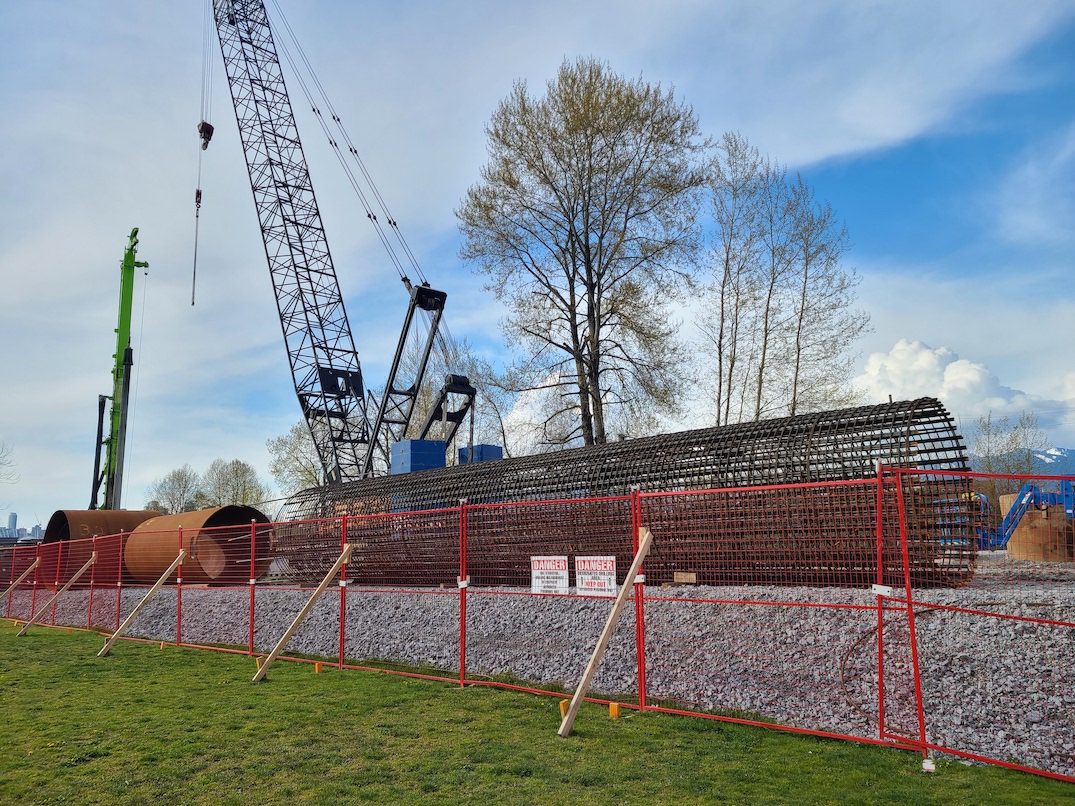